An Old Street in Bristol is Revitalized With Infill Cohousing 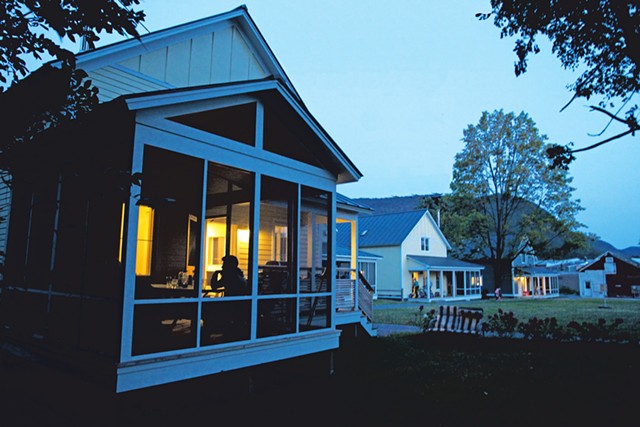 Mollie German was making chocolate chip cookies in her spotless new kitchen when she realized she was out of vanilla — and quickly dispatched her 13-year-old son to buy some at the grocery store a block away on Bristol's Main Street.

He completed the errand on foot, to his mother's delight. Pedestrian access and independence are among the things German wanted for her two children when she moved in August from a big house on a rural lot in Warren. Her new home: a 1,232-square-foot triplex at Vermont's newest cohousing community in historic Bristol village.

"I was looking for somewhere we could walk, a more condensed community," explained German, a potter and graduate student. She also craved the emphasis on community that is a cohousing trademark. She appreciates, too, that her ultra-energy-efficient digs are brand-new but share a street with 19th-century homes with slate roofs, wavy glass windows, wrought-iron fencing and columned porches.

"This is a sweet little spot," German said. "I feel very grateful."

Vermont is home to at least seven residential developments that meet the rough definition of cohousing — the Scandinavian-pioneered concept in which private homeowners share green spaces, maintenance or gardening equipment, and sometimes a common house where they gab over weekly potlucks, pick up their mail and put up their guests.

Most cohousing in Vermont is on rural parcels. The 14-unit Bristol Village Cohousing, which opened in August, stands out in several ways. For one, residents are close to Main Street and within earshot of the town band that plays every Wednesday in a gazebo on the village green. Also unusual: The development is a mix of rehabbed historic homes and new construction, laid out around a rectangular common fashioned from the backyards of the older homes.

One of the latter, at 16 North Street, is an 1860s beauty with 10-foot ceilings, a porte cochère, distinctive brackets and other handsome details; it was featured in the 1988 film The Wizard of Loneliness. This now serves as the common house for group meals and gatherings, its several bedrooms as guest quarters.

The rest of the cohousing complex consists of five new single-family homes and a new fourplex, a duplex and a triplex carved out of older homes, two old barns, 23 uncovered parking spaces, and a lot for a big community garden. The entire site is 2.5 acres.

All but two of the units have been sold, with prices ranging from $271,000 to $351,000. Residents moved in this summer from Burlington, the Mad River Valley, Maine, Brooklyn and San Diego. Among them are a nurse, a carpenter, a massage therapist, young parents, empty nesters and retirees. Governance is a collective affair, and each household gets a vote on the community board.

All of the units were designed to use about 70 percent less energy than a typical home. The roofs have solar panels, and the heavily insulated walls are 13 inches thick. Heat pumps keep the interiors warm or cool. Cedar-slat sunscreens, somewhat similar in shape to awnings, are attached to exterior walls above southern-facing windows to reduce overheating but let in light.

In the kitchens, the stoves use energy-saving induction heat, which boils water "crazy fast," explained Niko Pruesse. The massage and healing arts teacher moved with her husband, Mark Adams, from Burlington to Bristol Village Cohousing this summer.

Their 1,530-square-foot duplex is open and bright, with sage and lavender walls, original hardwood floors, and vintage tiles and pedestal sink in the big upstairs bathroom. Pruesse's in-laws recently moved from San Diego and share the house. The former Californians appreciate the proximity of the library, post office, restaurants and neighboring houses.

"It's so great that they can just walk everywhere," she said.

On a recent evening, children rode their bicycles on the gravel path around the common and swung the tetherball suspended from a pole in the center of the grassy area. Their parents carried lasagna and blueberry pie to the weekly potluck in the common house.

To the east, the outline of the Bristol Ledges and Hogback Mountain loomed like a green shelf. To the south, cars moved slowly past the shops and restaurants on Main Street, the mood of the town serene.

"We call ourselves a village within a village," said Peg Kamens, who cofounded Bristol Village Cohousing with her husband, Jim Mendell.

The duo decided they wanted to develop this type of community about eight years ago. They'd gained experience in real estate financing, environmentally conscious construction and collaborative governance at the Common Ground Center, the nonprofit retreat and family center they'd created in nearby Starksboro.

But it was difficult to find the right parcel of land for cohousing, the couple said, and some of their early partners in the effort dropped out. Things came together when they learned that three historic residences and an empty lot were for sale on Bristol's North Street.

Kamens and Mendell bought the whole stretch for about $750,000 in 2013 and took out a construction loan for $3.4 million, mortgaging their own house in the process. Permitting took six months, which the couple considers a relatively short time given the complexity of the proposal.

Although the house at 16 North Street was in solid shape, the other properties were sagging or vacant. The decay helped convince town appointees that the newfangled cohousing development would be a good thing. "It was kind of like a creepy, run-down area of a very sweet little town," said Kamens.

Though she had moments of worry — realizing that if the units didn't sell quickly, she and her husband would be on the hook for property taxes and other holding costs — Mendell remained optimistic.

He marketed the units without using a real estate agent and didn't worry too much about the risks. "People come because they love cohousing, so it wasn't really that scary," Mendell said. He and Kamens, who raised three children in a big house on a dirt road in southern Chittenden County, say they love their new cottage at Bristol Village Cohousing and aren't looking back.

Essex Junction-based Stewart Construction began work on the project in September 2016 and finished up in August. Some Bristol residents watching the progress were skeptical at first.

"They were not all that receptive early on," said Aaron Stewart, vice president and senior project manager of the construction company. "A lot of people had odd ideas about what was going on. There were thoughts that it was a gated community on one hand, and, on the other, people thought it was low-income housing."

But as the work progressed, "people really started to like it," Stewart continued. "They commented on it regularly. They would compliment the workers who were doing the exteriors of the buildings."

Project architect Jean Terwilliger of Middlebury worked with Mendell and Kamens to save and restore historic elements: a star-pattern fanlight over one door, delicate iron fencing along a stretch of sidewalk, columns, interior hardwood floors and working fireplaces.

The architect also worked to angle decks, porches and windows in a way that would allow views of the outdoors but maintain privacy inside. Bringing the new into the old neighborhood was easier than one might think, Terwilliger said.

"Because it was the existing lot with the three houses that were there, in my mind, we had a head start," she observed. "It sort of gave us some structure to work within."

The units range in size from 890 to 1,530 square feet. For German, that meant considerable downsizing of her family's stuff — most of which she doesn't miss. Her duplex is bright and warm and uncluttered, and she likes it that way.

"For me, I really just love the simplicity," German said.

The Bristol Village Cohousing grand opening is Sunday, October 15, 2 to 5 p.m., with refreshments and tours of the project.

The original print version of this article was headlined "Happy Together"