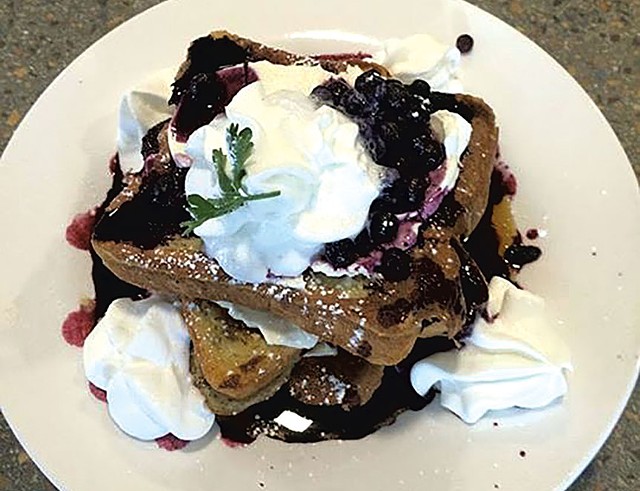 One year, six months and 12 days ago, Bonnie Poginy's husband handed her the key to an old carriage house in Orleans village. "He totally surprised me," Poginy recalls. Then the couple spent the next year and a half planning, cleaning, renovating and hiring their way to a restaurant.

When the Carriage House Café & Grill opened at 27 Water Street last week, it fulfilled an enduring dream for the Northeast Kingdom native. Poginy grew up in a restaurant — her mother ran Coventry's Martha's Diner for years, and her sister continues to oversee the griddle there — and had long wanted to open her own. But the right combination of location, timing and financial means took a while to present itself.

Though the Carriage House serves breakfast and lunch seven days a week, Poginy's menu is decidedly more formal than the one at Martha's. The restaurant is also open for dinner Thursday through Saturday, and co-chefs Roberto Seals, Gary "Bear" Birchard and Betsy Carter bring decades of combined experience, having filled culinary posts at Jay Peak Resort, Orleans Country Club and other sites around the Kingdom and state.

At night, the menu balances pub-style dishes such as burgers with family-friendly dinners, such as a meatloaf shrouded in mashed potatoes and gravy and scattered with crisp bacon crumbles. Steaks, seafood and baked lasagna round out the menu.

Paired with a full bar, that menu has drawn enough guests to fill the dining room daily since the place opened, Poginy says. Aside from a pizza joint and a Subway, the Carriage House is the only sit-down restaurant in Orleans, and Poginy has been mindful of supporting the community in her efforts.

Most of the food comes from area farms, Poginy says, and adds that her "buy local" ethos extends to every aspect of the business — including the labor and materials used for the extensive renovation of the Queen Anne Victorian. "I try to do almost everything local," she says. "That's important."