An Interview With David Lamb of Brown Bird 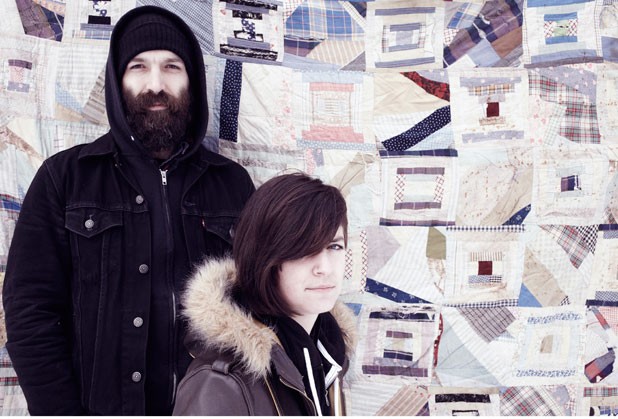 On their latest record, Fits of Reason, Rhode Island’s Brown Bird take lyrical cues from famed thinkers such as Thomas Paine, Omar Khayam and Christopher Hitchens. Amid hypnotic arrangements of swirling violins, sinister guitars and foot-stomping percussion, the duo of David Lamb and MorganEve Swain deliver a contemplative philosophical treatise of their own. Richly textured and nuanced, the album builds on the multicultural sonic influences of the band’s earlier work, while adding previously unseen elements — electric instruments, for one — that deepen the impact and mystery of their music.

In advance of the duo’s performance at the Higher Ground Showcase Lounge this Thursday, April 4, Seven Days caught up with David Lamb by phone from his home in Warren, R.I.

SEVEN DAYS: You’re touring with another Rhode Island band, Last Good Tooth. What can you tell me about them?

DAVID LAMB: One of the things I like about them is that they really have their own sound. The lead singer, Penn Sultan, has got a great lyrical style, with his own wit thrown in. They sort of fit in “Americana” … sort of. But they’re not tied to it and not trying to reproduce anything, specifically. We appreciate that a lot.

SD: Both of your parents were ministers. How does that religious upbringing factor into your songwriting?

DL: I was raised in a household where reading the Bible every day was a requirement. That got me into a seeker’s mindset. I didn’t stay in the church when I left my parent’s house. But it gave me a drive to figure out what my beliefs were. So I’ve always been seeking different perspectives and philosophies and what else is out there in the world. That makes its way into the lyrics. It’s pretty directly related, especially on Fits of Reason.

SD: You tease Thomas Paine in the title of the record and touch on larger philosophical themes in your songwriting than in some of your previous work. Did you specifically set out to write with more of an outward gaze?

DL: It wasn’t something where we were like, “All right, now we’re gonna get really obscure.” I think it just happened to come about with the books I was reading at the time. Something that inspires me in lyricists I respect is the ability to paint a picture, poetically, without spelling out every little detail. It gives your imagination room to add your own personality into the scenario. I love that about other lyricists. And part of me was probably trying to repeat that phenomenon so that it hopefully happens to our listeners, as well, and maybe they’ll have a more profound experience than everything spelled out letter by letter.

SD: You have an interesting tattoo across your knuckles that reads “Come Home.” What’s the story there?

DL: I got that at a very transitional time in my life. I had just ended a seven-year relationship, and the other members of Brown Bird at the time were focusing on other projects. So I was out on the road alone for six months and also leaving a very high-paying job that I felt was locking me into a lifestyle I didn’t want. So the tattoo was to remind me that, however how far out I go, not just physically but emotionally and psychologically, I wanted to return to some sort of home base and not change the core elements of who I am in the midst of all this drastic change.

SD: Brown Bird have had several iterations. But you’ve lately settled on being a duo. What are some of the advantages and disadvantages of playing in that format?

DL: For the most part, it’s great. We’re a very efficient machine, as far as touring goes. Being in a band is like being in a relationship, from all the different views and opinions that go into not only songwriting or music but stuff like, “Where are we gonna eat tonight?” We have our own challenges with songwriting, just between the two of us. But I think we’ve discovered a common ground where it works for us.

The challenges are that if you have ideas that require different parts, it’s difficult to scale back to the core, the most necessary parts that still keep the song as strong as possible but as simple as possible as well. But that’s a fun challenge.

SD: Is it difficult to recreate the arrangements you use in the studio in a live setting?

DL: Honestly, I feel like most of the songs that you hear on the album are not far off from what you’ll hear live. There are a couple of exceptions, specifically “Bow for Blade,” which has kind of an Andrews Sisters influence, with MorganEve harmonizing with herself. Occasionally live, we’ll have special guests that help recreate that. But for most shows, we’ll probably have to have my scratchy-ass voice filling in for her beautiful one on those harmonies.