An Interview With Comedian John Hodgman 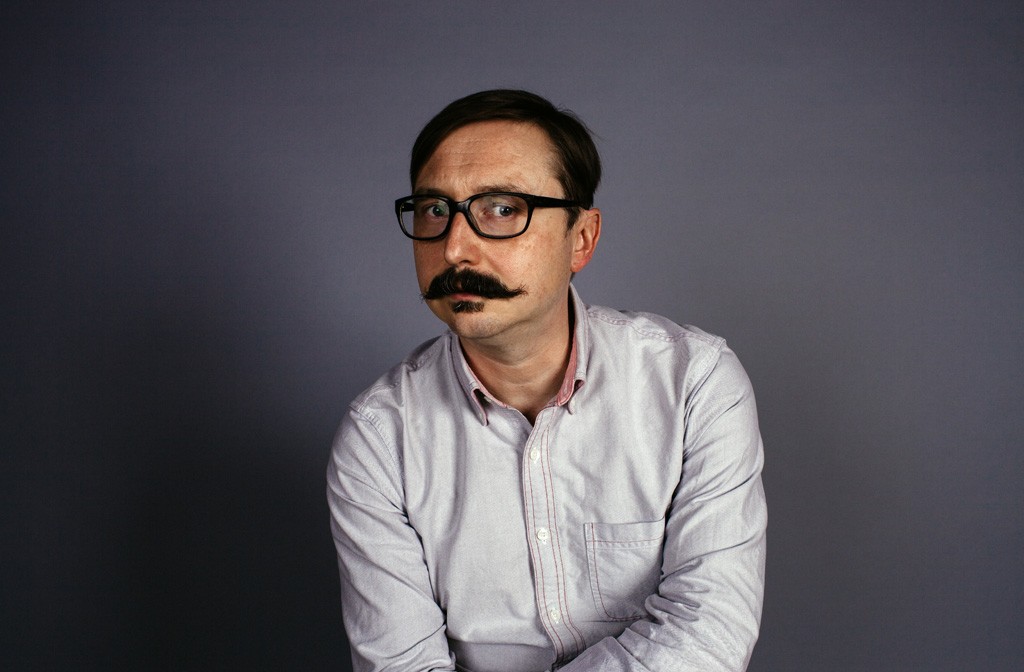 John Hodgman is quite upset that the world has not ended. Had the end times arrived in December 2012, as the ancient Mayans (and Hodgman himself, sort of) predicted, the Brooklyn-based humorist and minor television personality would never have had to justify sporting a preposterous mustache for many months. Because everyone to whom he would have had to justify it would be dead, you see.

Tail between his legs but chin pointed boldly heavenward, the recently de-mustachioed Hodgman has persevered, embarking recently on a national tour to bring his unique brand of comedy and "knowledge" to his many admirers. Hodgman will make two stops in the area: South Burlington's Higher Ground on Wednesday, November 19, and the Lebanon Opera House in Lebanon, N.H., the following evening. Opening for Hodgman at both shows will be artisanal pencil sharpener David Rees. We are not kidding.

Hodgman recently spoke by phone with Seven Days about several of the areas of his expertise, which include such subjects as Charles Nelson Reilly, weird-tasting regional beverages and Vermont's little-known geological history.

SEVEN DAYS: My God, how did you know all of that?

JH: I'm channeling it. I'm pulling it through the Skype waves and right out of your brain. Actually, I learned some things and I type them into the internet, and that allows me to pretend that I know a lot more things. That is basically the explanation and excuse for my career.

SD: How is the tour going so far?

JH: Well, first, you may be interested to know that, as I have been doing press for this miniature tour of New England, a reporter from another state in New England that is not Vermont basically premised the entire interview with, "You know that no one in this state will laugh at anything you say. How are you going to handle the fact that no one in my state is intelligent enough to appreciate your particular brand of arched-eyebrow humor for the low-chuckle set?"

SD: How did you respond to that?

JH: I said that I felt very strongly that the people of New Hampshire are very capable of understanding any joke. They're a smart bunch and we're going to have a good time. And if I inadvertently revealed which state I was talking about, I apologize.

SD: You don't exactly do standup. What can the audience expect from the shows on your current tour?

JH: I've never really benefited by putting a genre to what it is that I do, because I feel that it insults those genres. Standup is a beautiful art form that has specific challenges unto itself. And within standup, there are a lot of weird pigeonholes that have come up lately: storytelling, "alt-standup." And all of those labels tend to be imprecise. There's not a lot of room in those pigeonholes, you know what I mean? I would prefer not to put myself in a pigeonhole, since there may be other pigeonholes I want to explore. I think what you want to do is go out there and be as brave and as honest and as good a storyteller or comedy writer, or whatever it is you are, as you can be.

All I can do to describe myself is to say what I was and what, implausibly, I am now. I did not seek to become a "mortality comedian" or an "apocalypse humorist." All I could do was follow my own preoccupations and the things that made me laugh, and do the best I could with those preoccupations to explain why other people might find them interesting, as well — and to entertain as best I could. All of these things led me to become, implausibly — at the age, then, of about 35, now at the age of 43 — a famous minor television personality.

SD: You just anticipated my next question: How do you feel about the fact that Wikipedia lists "television personality" as one of your occupations? That evokes Charles Nelson Reilly and Charo — actually, that's some pretty good company.

JH: I do not feel bad, because I think Wikipedia must be quoting me. I am what I am, and I think the best description of it is "minor television personality." And I put that out there having grown up on a diet of watching Charles Nelson Reilly on "The Match Game," and that to me seems like the greatest job in the world: to be known by your own name and be brought in to demonstrate no special skills other than to sit between a drunken Ed Asner and Charo of an afternoon and have fun with your friends on "Match Game."

SD: You're sort of upset that the world hasn't ended, aren't you?

JH: [People] may have noticed that the world did not end on December 21, 2012, as I had predicted in my last book and in my one-man show on Netflix called "Ragnarok." And that's very frustrating to me, because I had done everything I had ever set out to do in my life. I was ready for the world to end. People ask, why did I grow that terrible mustache in 2011-2012? It was not for a joke. I mean, I made jokes about it, but I figured it was obvious: I'm over 40 years old; I no longer deserve physical affection; I'd completed everything I need to complete, artistically, in my life. So I was ready to die. The benefit of apocalypse is that I get to take everyone else out with me.

I'm not genocidal by nature, you understand. Although I'm very happy and healthy in my normal life with my wife and two human children, I have discovered that I really enjoy telling stories onstage and doing standup comedy. Yet I had no more material to perform, because most of my material was "Mayan apocalypse" material. I had already written 1,000 pages of fake facts, and I had quasi-literally destroyed that world within the pages of that last book. That whole alternate universe of mole-men and hoboes and the submarine-zeppelin wars and the wandering, surreal 51st state of Ar — all of that was destroyed in the books, with purpose. I knew on some instinctive level I was ready to move on.

Figuring out what you care about and what makes you happy and what makes you laugh is hard work. To do it, I booked a bunch of shows in the basement, beneath the bocce court in a bar in Park Slope, where I live — Union Hall — and I kept the shows more or less secret, in very small rooms, and I kept the prices of the shows very low, to minimize expectations of entertainment. I forced myself to go onstage to say what was on my mind and thereby learn what was on my mind. What I'd discovered happening was that I was doing the closest to standup I had ever done: unscripted, often improvisational, very much sketched out but completed onstage in collaboration with the audience. What grew out of that was this show, which begins with me literally shedding the layers of characters and personas that I had taken on: the PC, King Nerd, the Resident Expert, the Deranged Millionaire, and reviewing the weird dad/confused accidental celebrity that I am.

SD: Your podcast, "Judge John Hodgman," has become quite popular. How did it come about? Did you actually think that shows like "The People's Court" weren't funny enough?

JH: That's inadvertent humor. It never occurred to me that "Judge John Hodgman" would necessarily be funny. I did want it to be fun, and I wanted to have fun. Jesse Thorn, who plays the bailiff and is my producer and partner in the program, has been a friend for a long time. It was his idea that I would come in as "Judge" John Hodgman and adjudicate disputes over whether chili is a soup or a stew, for example. I could not have said "yes" fast enough.

I never considered doing it, but it makes perfect sense. I want to do it, and I really want to yell at whatever idiot out there thinks chili is a soup. I'm an opinionated person, and though I've been a fake expert for a long time, it takes a lot of research to become a fake expert. The show has been going on now for almost four years, and it was my first opportunity to really just speak as myself, not as the characters from my books or from "The Daily Show [ with John Stewart]."

What I hope that the fans of "Judge John Hodgman" will enjoy, if they come to the show in Burlington, is that they're going to be seeing the same guy they listen to every week. The same judgmental yet kind, confident yet neurotic and self-loathing, Moxie-swilling, buzz-marketing-hating, mustache weirdo that they have come to know and maybe like.

SD: I know that it's not so easy to find Moxie in Brooklyn, but it's in every supermarket in Vermont.

JH: I love Moxie because I love the redoubts of regionalism that we hold onto in this country in the face of mass culture. And I especially love when those regionalisms are weird tasting and bitter. Whether it's Moxie in New England or Malört [a potent botanical liqueur that Hodgman has famously described as tasting like "pencil shavings and heartbreak"] in Chicago or scrapple in Pennsylvania. These are the things that I really enjoy the most. They remind me of how weird this country really is. What I don't like about Moxie is that, despite all of my requests and, now, badgering, they have not sponsored the "Judge John Hodgman" podcast. I hate the fact that they're enemies to me, but they are. You may print that in bold.

SD: Do you know anything — true or false — about Vermont that even Vermonters might not know?

JH: Well, "Vermont" is French for "glass mountain," and that's because, initially, all the mountains there were made of glass. It was beautiful. Then, over time, they got smashed. By hail. And then there were just these dumb green mountains that were left. This was a long time ago, in, like, 1962, so you wouldn't remember it.

I also know that, of a weeknight, if you are caught after dusk in Brattleboro, all of these young people wander up from the train tracks where, I guess, they live. All of these dreadlocked young people who are, I believe, the hoboes of today, have chosen the alternative lifestyle of hangin' around by the tracks by day and wandering the streets of Brattleboro, Vermont, by night. It's sort of magical to see them all emerge. Like fireflies with facial piercings. Of a summer evening, people will set up some camp chairs and sit on their porches and watch them all emerge. It's wonderful.