An International Dance Musical Gets a Little Dirty 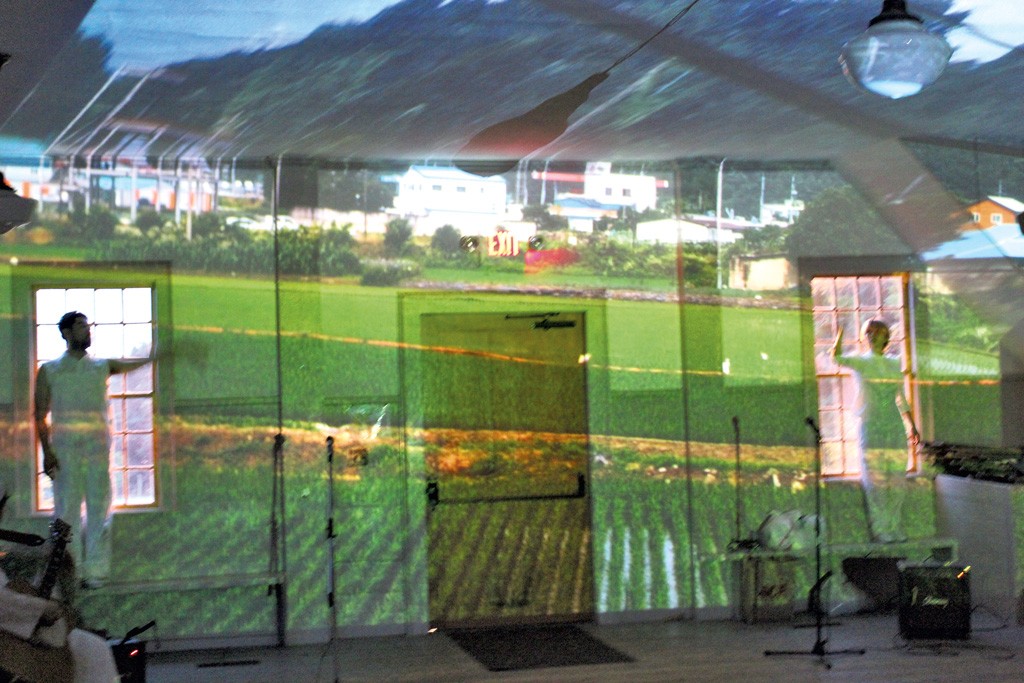 Last week in the tiny town of Acworth, N.H., a cross-cultural group of dancers was fine-tuning its moves for an upcoming performance titled Good Dirt: An International Folk Musical. A collaboration of University of Vermont associate professor of dance Paul Besaw and his wife, Kim Chong Ho, the piece features dancers from the U.S. and South Korea, and will travel to three pastoral venues in Vermont this week.

Besaw had invited a reporter to witness the group's process and get a feel for what Good Dirt is all about. While that wasn't easy to pin down, in essence the piece addresses humans' relationship to the natural world and how we communicate within and about it. Through the wide-open town hall windows, the sound of birds and the smell of fresh grass gave immediacy to that concept.

That effect won't be lost when the show hits the road: Besaw, Kim and their fellow dancers are working in rural performance sites, staging two of the three shows in barns.

Besides nature, the production is about "the mythology of place," said Besaw — and not just one place. The "international folk musical" draws on Korean and English dialogue and song, traditional Korean dance forms, and American folk music and storytelling.

Kim came up with the original ideas for Good Dirt. On a visit to her native South Korea two years ago, she noticed that many Koreans had formed their ideas about Vermont from Helen and Scott Nearing's Living the Good Life: How to Live Sanely and Simply in a Troubled World. The homesteading classic, first published in 1954, documents the lives of the Nearings as they created their home in Winhall, Vt. (They later moved to Maine.)

But it wasn't homesteading that interested Kim and Besaw. Instead, it was the way people think about the natural environments they escape to — or from.

Kim sees Vermont's mirror in South Korea's Jeju Island. "There are so many things that you can do in Seoul and big cities, but, at the same time, there's a lot of headache," she said. "So there's a lot of movement away from Seoul, and Jeju is one of the places [people go]."

Kim pointed out that two of the performers, Jeong Hansol and Kim Min Jung, are from Jeju. (Jeong is a graduate student at the Korea National University of Arts in Seoul, but wants to move back to Jeju at some point after he graduates.)

The escape to and from nature manifests in the structure of the performance, which begins and ends outside. In one of the opening scenes, Roxanne Schroeder-Arce and Kim Min Jung flung themselves into a contemporary dance in a garden — making weeding look more interesting (and exhausting) than ever before. Soon after, the performers danced themselves indoors, and that journey was the most direct path Good Dirt took from that point. Audiences won't find any semblance of a linear story line in the arrangement of scenes that follow.

Standout segments included Jason Lambert's spin on salpuri, a traditional Korean dance that draws on elements of shamanism. Per custom, he performed alone, with slow, flowing gestures. Perhaps less traditionally, he mimed the scattering of seed. Then there was Jeong's athletic interpretation of "older Korean and American folk forms," as Besaw described it. Jeong literally danced circles around the other players, who accompanied him on traditional Korean drums while seated on the floor.

Among the various vocal numbers, Kim Min Jung's performance of "Mother Teach Me," by contributing artist Clare Byrne, was as arresting as the singer's faded pink hair. With Kim's compatriots backing her on guitar and ukulele, her clear, acrobatic voice gave lines such as "Mother, teach me how to knit" surprising weight.

As the rehearsal wrapped, the performers danced back to the "good dirt" of the great outdoors with cacophonous, exuberant drumming.

There was a lot to take in here, and in less capable hands the bilingual, fragmented collage of forms and ideas might have fallen apart. Audiences will have another chance to dissect the "dirt" following each show: over refreshments — in Korean and American.