An Illinois Developer Is Claiming CityPlace Burlington as Its Own 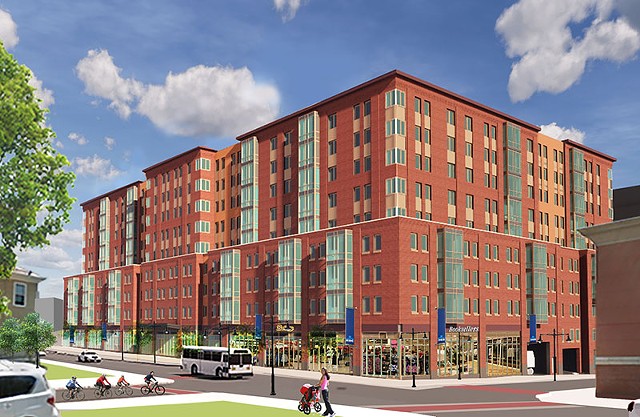 CityPlace Burlington will have 427 luxury apartments, a rooftop pool with cabanas, a fish tank lounge and pet spa.

The description is from a proposal that an Illinois-based housing developer submitted to the City of Burlington last week to redevelop another Burlington landmark — Memorial Auditorium.

The firm, Hawthorne Development Corporation, was one of three outfits that responded to a city request for proposals to fix up Memorial, which closed in 2016 due to structural concerns. Hawthorne’s pitch included a portfolio of its work and projects in the pipeline, including CityPlace Burlington. 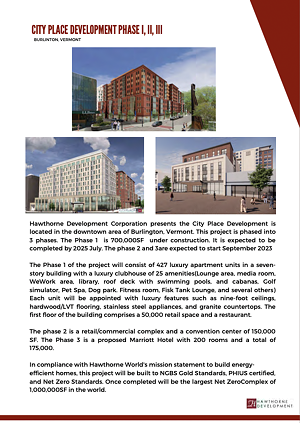 “Phase 1 of the project will consist of 427 luxury apartment units in a seven-story building with a luxury clubhouse of 25 amenities,” the brochure says, listing a golf simulator, WeWork area and library. “Once completed [it] will be the largest Net ZeroComplex of 1,000,000SF in the world.”

But Dave Farrington, one of the three CityPlace developers, says Hawthorne isn't involved in the project at all. And he's never even heard of a fish tank lounge.

“We haven’t even gotten to designing [the project],” Farrington told Seven Days on Wednesday afternoon. “I almost want to call him up and say, ‘What the hell is this?’”

The operative “him” is Hawthorne CEO Ganesan Visvabharathy, who goes by the nickname Dr. Vish. Farrington said Vish has approached the CityPlace team several times over the last year about starting a partnership, as have many other developers since the team bought out former project owner Don Sinex earlier this year.

“I don't see anybody putting CityPlace on their website saying, ‘We’re doing this,’” Farrington said. Vish is “acting like he owns it ... [and] I can tell you he doesn’t.”

At Long Last, Construction Begins on CityPlace Burlington Site
By Courtney Lamdin
News
Farrington called Vish after hanging up with Seven Days. The developer told Farrington that his colleagues had submitted the document" without his full knowledge" — even though his signature is on the cover page.

It's not the first time Vish has taken credit for the CityPlace project. In June, Crain's Chicago Business, a weekly newspaper, published a profile of Vish that cast the 73-year-old as a tireless entrepreneur with an ever-expanding portfolio, including in Burlington.

“CityPlace will be the largest net-zero development in Vermont and perhaps in all of New England,” Vish told the paper. “I never thought I’d be so busy at this stage of my life."

Vish didn't respond to multiple interview requests from Seven Days on Wednesday. On Thursday morning, Hawthorne vice president Yolanda Contreras said Vish is preparing for a trip to India and may not have time to return a phone call. She said she couldn't answer questions about CityPlace or confirm who submitted the Memorial proposal.


Later Thursday, Vish's colleague Paul Hodes told Seven Days that Hawthorne mistakenly submitted an old version of the brochure that dated back to when Vish had approached Sinex about purchasing the project. Hawthorne may have considered CityPlace a "pipeline project" at the time, Hodes said.

But Hodes — an attorney and former member of Congress from New Hampshire — said at the time of the Chicago Business interview, Vish was under the impression he had a deal in place with Sinex.

"Whatever [Vish] said or didn't say, what I can tell you is Hawthorne is not involved in CityPlace," he said.

A web search of Vish's previous work shows he has been a developer for decades, with mixed success. His plan to redevelop Chicago's historic Lexington Hotel — where Al Capone lived and did business — earned him a story in the New York Times Sunday edition in 1989. But Vish couldn’t get financing, and the building deteriorated. In 1995, a judge ordered it demolished, the Chicago Tribune reported.

Other efforts have borne fruit. In 2004, the Chicago Sun-Times wrote a story about one of Vish's well-appointed condo developments that had hardwood floors, “a million-dollar marble lobby” and a heated parking garage where spots cost $24,500 apiece. Seven Days confirmed that other real estate developments listed on Hawthorne's website are indeed real and were developed by the company.

As for Memorial, Hawthorne is proposing to build “40 tasteful but compact apartments” and a 3,000- to 3,500-square foot community space. The company also pledges to repurpose the historic plaques that honor Vermonters who served in World War I and says it can raise the estimated $20 million needed for the renovation.

Related The History and Uncertain Future of Burlington’s Memorial Auditorium

The History and Uncertain Future of Burlington’s Memorial Auditorium
By Chris Farnsworth
History
The two other proposals were from nonprofit Big Heavy World, which wants to reopen the youth-led music venue 242 Main at the space, and Babaroosa, an immersive art exhibit that in May announced a residency in Essex.

Brian Pine, director of Burlington's Community and Economic Development Office, which is vetting the Memorial proposals, said the city was surprised to learn Hawthorne misrepresented its relationship with CityPlace. Pine suggested that could affect how CEDO considers the company's proposal.

"As you can imagine, credibility and trust are key factors in weighing proposals for a public-private project of this magnitude," Pine said in a text message. "This mischaracterization will certainly be a factor to consider in the review process."

CEDO will begin evaluating the proposals on Thursday and make a recommendation to the Burlington City Council in January.

And the CityPlace team is looking for codevelopers, particularly for the north building. Farrington says there's a lot of interest, but "we just need to find the right person."

Could that be Vish? Farrington isn't sure.

"It makes me wonder, really, what they're thinking," he said.