An Expert Climber's Devastating Fall Leads to His Toughest Challenge

Steve Charest checked the rope securing him to a tree at the top of a 40-foot wall of ice in Smugglers' Notch last December, then called down to his partner that he was ready to be lowered. An expert mountain guide with nearly two decades of experience, Charest had done the same thing hundreds of times before. His client, belaying the other end of the climbing rope, held tight and prepared to feel Charest's weight pull the line taught.

But the unthinkable happened: The loop of rope anchoring Charest to the tree broke under his weight. He fell four stories onto the icy slope below, landing face-first.

The impact shattered bones in his skull and injured his brain. Bones in his left wrist and ankle snapped.

His two clients scrambled to call 911, and nearby climbers arrived within 10 minutes. Rescuers brought Charest, 39, to a helicopter that flew him to the University of Vermont Medical Center, where he spent seven weeks recuperating.

An avid outdoorsman, Charest co-owns Petra Cliffs Climbing Center & Mountaineering School in Burlington with his wife, Andrea. He's built his life and livelihood around the mountains. Despite devastating injuries, he says he's determined to return to the sport that nearly killed him.

"I know that I will get back to climbing," he said. "I keep on fighting to get to that next step."

Climbing and skiing have been at the center of Charest's life for nearly three decades. As a 10-year-old, he clambered up rock faces at summer camp near his western Massachusetts hometown of Agawam. Skiing came naturally, too. Charest recalled getting impatient taking slow, wide turns during lessons and asking his instructor when he could "just go straight and turn when the trail does."

He followed his passion for the mountains to Johnson State College, where he majored in outdoor education and joined the ski team. He found climbing mentors there who were eager to help him connect with the local scene and hone his skills.

They introduced him to Chip Schlegel, who was opening a new rock-climbing gym in Burlington called Petra Cliffs. Following an interview in the parking lot, before the gym was even built, Schlegel offered him an internship. Charest accepted and, when he graduated in 2002, joined the staff full time as a climbing instructor. Shortly after, he took a ski trip to Jay Peak Resort with a new coworker, Andrea Miller.

They got married in 2006. The next year, the couple bought a house in Jericho, about 100 yards from one of the state's most popular climbing spots.

In 2012, recognizing that Petra Cliffs needed an infusion of cash, the couple offered to partner with then-owner Mike Anderson, who had bought the gym from Schlegel. Instead, Anderson sold them the business outright.

The Charests' lives reflect their love of the mountains. Their 2-year-old daughter, McKinley, is named after the tallest peak in the United States, and their Greater Swiss Mountain Dog, Skadi (pronounced Scotty) is named for the Norse goddess of mountains, skiing and snow.

The couple is central to the most talked-about recent developments in Vermont climbing. They're both on the board of CRAG Vermont, the nonprofit behind the reopening of a massive rock face known as Bolton Dome, which was closed to the public in the 1990s; and they hope to break ground in the next month on a new, state-of-the-art Petra Cliffs location, a few doors down from the old one in Burlington's South End, that they've nicknamed "2.0."

Over the years, the Charests have met just about everyone in the state who owns a pair of climbing shoes, whether at their gym or on Vermont's crags. Climbers refer to "Steve and Andrea" almost as a singular unit.

Taylor Luneau was a freshman at Saint Michael's College in 2010 when he met the Charests through the school's adventure sports club.

"Steve played a huge mentorship role for me, especially," Luneau said, "but for many people, really, was an incredibly patient person and really willing to take us out, show us the tools of the trade, teach us how to deal with a variety of different scenarios and kind of turn us loose." 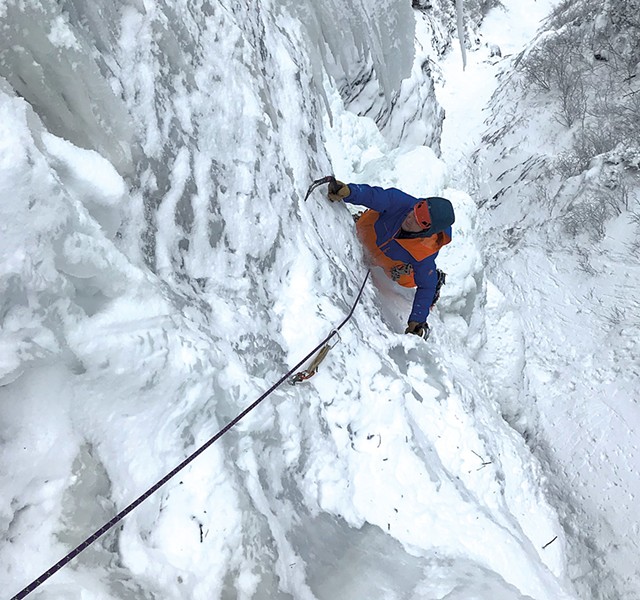 They shared a rope often — partnering up and ascending rock faces, many times in Smugglers' Notch, while carefully securing themselves to the wall to prevent falls. Luneau said Charest emphasized safety with a popular saying: '"There's a lot of bold mountaineers, but there's not a lot of old bold mountaineers.'"

As a guide and a climber, Charest spent weeks of every year in the Notch, climbing ice and rock and skiing down the steep, narrow chutes tucked into the mountainsides. The area where he fell is known among climbers as the "practice slabs" and, as the name suggests, the climbing is easy. It's the go-to spot for Petra Cliffs guides to bring newbie ice climbers.

December 27, the date he fell, "was a mellow day for me," Charest recalled. "This was a day that I would say was relatively routine, you know, climbing ice at a spot that I've climbed at many, many times."

Things changed in an instant. The fall left Charest semiconscious, bloodied and confused. It was, he later said, a "worst-case scenario."

But his years of investment in Vermont climbing — and in training his staff to the highest standards — paid off. One of Petra Cliffs' guides, Evan Kirk, happened to be leaving the Notch with a friend after a morning of climbing when he saw someone who appeared upset a few hundred yards up the road.

"And then I noticed that they were wearing the equipment we provide for our clients," Kirk said.

The scene didn't look right to Kirk, who'd been trained to stick with clients during an outing. The man waved him over and asked if he worked at Petra Cliffs. It was one of Charest's clients, and he was trying to call 911 but couldn't get service.

"That's when he told me that Steve had fallen and that he was up the hill," Kirk said.

Kirk's cellphone had service. He immediately called 911 and stayed on the phone as he hiked to Charest.

"Once I got eyes on Steve, I don't think I really said much," Kirk recalled last week. "Other than: 'I'm gonna hang up because I need to use both hands.'"

Charest was conscious, sitting in the snow, bleeding from his mouth, nose and ears. His climbing clothes and gear made it difficult to check for other injuries.

"It was obvious that he had sustained a big impact to his face. He was very much agitated and not really aware of the situation at all. He kind of knew he was hurt, [but] he had very limited alert awareness level," Kirk said.

Kirk had never encountered a person so seriously injured in the backcountry, but the mandatory Wilderness First Responder training he'd taken to become a Petra Cliffs guide kicked in. It was clear that the injuries were too severe for the four climbers present to move Charest, so they stayed with him. They wrapped him in warm clothes and they kept him awake, asking him to recite the alphabet so they could monitor his mental status.

Soon after, members of the Smugglers' Notch Ski Patrol arrived. The group of climbers and ski patrollers lowered Charest off the steep, wooded hillside on a stretcher, and then took him out of the Notch to a rescue helicopter. He arrived at UVM Medical Center about 90 minutes after the fall.

News of the accident traveled fast. Climbers from all over the world asked how they could help. A friend set up a GoFundMe page to help cover medical and childcare costs.

Donations flowed in. By Tuesday afternoon, about 10 weeks after the accident, more than 1,000 people had contributed a total of $94,789 toward Charest's recovery. (This reporter, a climber, gave $10.)

"You're an outstanding educator and centerpiece of the Vermont climbing community," donor Nathan Fry wrote on the fundraising page. Many shared the sentiment.

Luneau, the former Petra Cliffs guide, explained the outpouring this way: "I think what you're seeing is a return on that: 'Hey, you introduced me to this life-changing sport ... and I want you to know that I still carry that experience, and it's changed me.'"

At the hospital, surgeons placed five titanium plates in Charest's face and two in his jawbone as they reconstructed his skull. Surgeons also fixed plates and screws to his wrist and ankle. Doctors won't let him put his full weight on his leg yet, so he has to use a modified walker to get around.

Due to nerve damage in his face, Charest can't open his right eye. Doctors are hopeful that will change.

On Valentine's Day, seven weeks after he was rushed to the ER, Charest was discharged from the hospital. Friends and family have been staying with the Charests to help out and bring him to medical and rehab appointments as Andrea manages the household and keeps Petra Cliffs' new building on track.

One morning last week at the couple's house in Jericho, Steve slowly shuffled into the dining room behind his walker.

"Good morning," he greeted a reporter in a chipper voice. When asked how he was doing, Charest chuckled and gestured to his walker and wrist brace.

Over breakfast and coffee, Charest sounded like a typical climber — talking about far-off rock faces he planned to scale, fretting about pinch strength and throwing climbing lingo into conversations about his recovery. He leaned over to greet McKinley as she swept around the table with a toy broom. Aside from his closed right eye, Charest looked much the same, with short brown, tousled hair and broad shoulders atop his skinny six-foot frame.

He's grateful to be alive, but Charest is growing impatient with the months of healing and physical therapy.

For Charest, spending time on flat ground is torturous. One of his hardest days since the injury was when Andrea took McKinley to Cochran's Ski Area in Richmond while he stayed home.

To give him something to look forward to, Andrea pitched a family trip to the New Zealand mountains in 2020. That wasn't soon enough for Charest, who wanted to go this summer.

As it is, he's got a packed schedule.

"Pretty much every day I have something," he said. "My full-time job right now is seeing doctors." At almost every appointment, he asks the same question: "When can I climb again?"

Give it time, they tell him. But he has no doubt that it's a matter of when, not if.

Charest realizes that people who don't climb may question the wisdom of scaling walls after such a bad accident, but he said he just wants to get back to his life.

Charest is getting out. Last week, wearing his signature Petra Cliffs flat-brim cap, he joined fellow board members for the climbers' nonprofit CRAG Vermont meeting in Richmond. While hospitalized, he missed two of the monthly meetings; this was his first since the fall. Charest got a warm welcome at the beginning of the gathering.

"I'm not dead!" he declared with a sheepish grin, raising his left hand in a clenched fist. His friends and colleagues laughed and applauded.