An Exhibition by Bill Ramage Revisits Jackson Pollock, the Cold War and the CIA

Passersby at B&G Gallery on Merchants Row in Rutland might think they're seeing an homage to Jackson Pollock through the dusty storefront window. More than a dozen paintings, large and small, feature the splatter execution that the midcentury artist made famous; a photo of Pollock is embedded in each. Those passersby won't know the half of it, though, unless they're invited inside for a tutorial.

"A Lamentation for a Lost Lexicon," as this exhibition by Bill Ramage is called, is based on a remarkable slice of art history in which the CIA clandestinely promoted modern art. Yes, the Central Intelligence Agency.

Post-World War II, during the Cold War, the CIA was on a mission to promote the superiority of the American way of life — specifically, the nation's guaranteed personal freedoms — over that of the Soviet Union. What could be a better illustration of freedom of expression than the innovative canvases of Pollock and other abstract expressionist painters? No matter that the tastes of most Americans at the time were far more philistine. By comparison, Russia's state-approved artwork was stodgy socialist realism.

"I got to live and learn through that history... It's going to be lost if no one reflects on it." Bill Ramage tweet this

As Ramage tells it, the CIA weaponized free-spirited postwar American culture — writing and music, as well as visual art — to underscore the repression that most Russians experienced.

The CIA's target audience was not the Soviets themselves but Europeans who might be sympathetic to communist ideology. A number of online resources corroborate Ramage's account of events, including Louis Menand's 2005 New Yorker article "Unpopular Front."

"The Cold War had battlegrounds all over the world, and it was a hot enough war in some of them, but in the main battleground, Western Europe, it was a war for hearts and minds — an idea war, an image war, a propaganda war," Menand writes. "Global combat on these terms was the policy of the American government. There was no secret about the policy, and most of its enactments — such as the Fulbright Program, which was established in 1946 — were carried out in broad daylight and to public acclaim. But some were carefully shrouded, made to appear the work of individuals and institutions acting on their own, without government sponsorship."

The 1995 documentary series "Hidden Hands — A Different History of Modernism," by Frances Stonor Saunders, which is viewable on YouTube, takes a deeper and fascinating dive into the covert campaign. 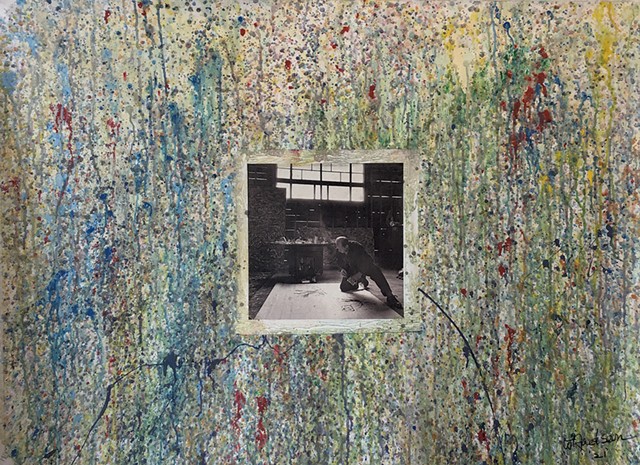 Ramage explained that the CIA organized European exhibitions of American art under the aegis of specious foundations or other funding entities. The agency also supported certain publications and pushed articles about the artists it wished to highlight. Ramage stressed that the artists themselves, many of whom were antiestablishment rebels, probably knew nothing about this stealthy patronage and would have been horrified.

At B&G Gallery, a plexiglass case holds one of the CIA-approved articles: a feature in the August 1949 Life magazine called "Jackson Pollock: Is he the greatest living painter in the United States?"

The magazine spread was just one example of the agency's influence, Ramage said, but it was a crucial one. The story gave the artist immediate renown, and prices for his paintings soared. "Jackson Pollock became a celebrity," Ramage said. "And celebrity culture changed everything."

The "lamentation" in the title of Ramage's exhibition refers to the dismay he feels when contemplating a central trend of that midcentury era: Artists shifted from "hanging out talking about art" to focusing on the monetization of their work. Ramage draws a through line from the CIA effort to the emergence of Andy Warhol, who openly embraced commodification in the early 1960s. In a pamphlet for the show, Ramage quotes Warhol: "Making money is art and working is art and good business is [the best] art."

Ramage satirizes the way we perceive the value of art by titling his own works in the show according to their size and corresponding price. One of his larger pieces, for example, is "No. 60 (x 103 = 6180)." A sign on the wall announces, "All the paintings are on sale: $.29 per square inch!!!!"

In fact, the work is "not really" for sale, Ramage said.

He underscores the hybrid nature of these works — his own splatter and drip paintings paired with a vintage photo of Pollock — with the waggish signature "W.T. Jackson." The initials stand for Ramage's first and middle names: William Taylor.

A better example of Ramage's own considerable artistic skill is the nearly life-size image of Pollock that he has cut out and propped in a corner of the gallery. Resembling an enlarged photo but actually a pencil drawing, it depicts Pollock seated, an ever-present cigarette in hand, gazing down at one of "his" paintings on the floor.

"[Pollock] said, when he was in his painting, he was almost totally unconscious," Ramage explained. "The movement was a kind of meditation to make the drips; he was not unaware, but after a while he would sit back and look at the painting ... He called it his 'get-acquainted period.'"

Besides seeking to illustrate the CIA connection, Ramage is interested in the postwar era of 1949 to 1964 because "it extends from my high school to college years," he said. "For my generation, it's still a living history. I got to live and learn through that history ... It's going to be lost if no one reflects on it."

Ramage, who is just shy of 80, is a professor emeritus at Castleton University. To say he has actively pursued art making in his retirement would be an understatement. He has also worked to establish exhibition spaces in some of Rutland's empty storefronts with the blessing of property owner Mark Foley. One such space, the B&G Gallery, is a former boys' and girls' club.

For now, Ramage welcomes visitors to "A Lamentation" by appointment, but he noted that the exhibition will gradually morph into the next chapter of his exploration of abstract expressionists. In his nearby studio, he's been painting his own versions of Jasper Johns' American flags. Though not exactly abstract, they're definitely expressive.

"A Lamentation for a Lost Lexicon" by Bill Ramage, on view by appointment through June 30 at B&G Gallery in Rutland. Contact bramage93@gmail.com.

The original print version of this article was headlined "Covert Operations"