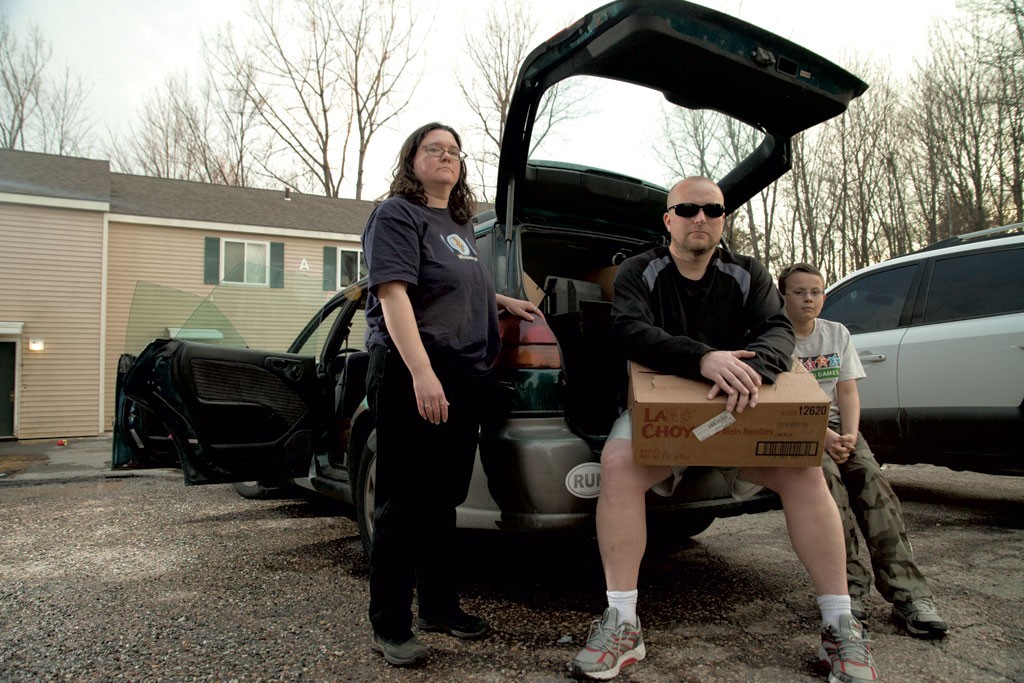 In late March, roughly 100 residents of Green Meadows Apartments in Essex Junction returned home to find that eviction notices had been tacked to their doors. The writing was on the wall — literally: They had 60 days to pack up their belongings and get out.

Where will they all go? That's a tough question for some in the development, where a two-bedroom apartment rents for an average of $850. Finding vacancies — at comparably low prices — in the tight Chittenden County rental market is a daunting task. Fair-market rate for a two-bedroom unit in Vermont's most populous county is $1,309, according to the U.S. Department of Housing and Urban Development.

Few current tenants will likely be able to return to the new, improved Green Meadows, where rent for a two-bedroom apartment will double to roughly $1,600. The building's owner, Burlington physician Jeff Rubman, plans to demolish all 112 apartments over the next three to five years and replace them with 300 new units. There will be additional amenities: more space, laundry facilities in each apartment and exercise equipment in every building. The new complex will also include a swimming pool and a community center, and Rubman promises walking and bike paths that connect to the neighboring Tree Farm Recreational Facility.

"I just wish if they were going to rebuild, they were going to be affordable," said Deborah Quintin, one resident living in the first 40 units slated for demolition. (People in the other 72 apartments, which will be torn down in later phases, can stay put — for now.) Construction is expected to begin by July, with the first new units ready for occupancy next spring.

Rubman says it's no secret that he's been gearing up for a major overhaul. He said he started converting residents in the first complex from long-term leases to month-to-month ones about a year ago. Since 2012, he's been working with Essex Junction's planning commission to get the village's stamp of approval, and he submitted an application for an Act 250 permit this past February.

"We were all in shock," said Quintin, who has lived at Green Meadows for nine years. "Absolutely no one knew ... One poor guy, he just moved in March 1, and they didn't bother telling him." Last Wednesday afternoon, Quintin was boxing up her two-bedroom apartment. "Want any stuff?" she asked a reporter. "I'm serious."

Many of the soon-to-be displaced residents at Green Meadows are in a tough socioeconomic spot. Only a few being evicted this spring, such as Quintin, receive Section 8 vouchers, a federal rent subsidy. Many of the others rely on below-market rents to make ends meet.

Tasha Spaulding, a mother of two, answered her front door to reveal a hallway and living room already crowded with cardboard boxes.

Asked about her plans, Spaulding answered matter-of-factly: "We're moving. We have to."

Spaulding is a stay-at-home mother of two boys, 8 and 11. Her husband is a para-educator at Mount Mansfield Union High School. Spaulding's mother-in-law was on hand last week to help with the packing.

"She tells me I have too many books," Spaulding teased gently.

Her family's sudden search for a new home landed them in Lamoille County, where fair-market rents are 25 to 30 percent less than in neighboring Chittenden. Spaulding tried to find something closer. "I called a couple of places," she said. In most cases, prices were just too high. Or voicemail boxes were already full by the time she called, so she couldn't even leave a message for the landlord.

The rent for their Jeffersonville duplex will be slightly higher than the $825 the family pays now, but Spaulding's looking on the bright side: She'll have her own washing machine and a little more space.

Her biggest worry is that her boys won't be able to finish out the school year in Essex Junction. Crossing her fingers, she said she expected a final decision from the school district within a few days.

Elaine Sopchak had such families in mind when she first expressed concerns about the plan to redevelop Green Meadows. As a member of the village's board of trustees, she weighed in at an early hearing on the project in 2012, noting the need for affordable housing in Essex Junction and speculating about the redevelopment's impact on affected families, particularly those with children in the local schools.

On paper, she said, the village has a "decent" amount of affordable housing. "It's just, they're full," said Sopchak.

Advocates for affordable housing say the loss of 40 units in the Chittenden County rental market will be keenly felt. "I'm trying to think of a time where ... something on that scale has happened," said Chris Donnelly, the director of community relations at the Champlain Housing Trust. "It's significant."

CHT is fielding calls from some Green Meadows residents looking for leads. But the trust has few vacancies. "My biggest concern is, I don't know where 40 households, paying an affordable rent, find a place to live right now," said Donnelly. While Rubman is following all the applicable state rules, he continued, two months of notice seems "in this case, in this market, really short."

The big picture, Donnelly said, is that low interest rates and low vacancy rates are incentivizing developers to build multifamily housing. While that means more units on the market, few are in a price range that individuals at the lower end of the economic spectrum can afford. "If everything's being built for one end of the income level, then we're just leaving other people behind," said Donnelly.

Rubman and a business partner bought the property 33 years ago; today he owns the building alone. The apartments themselves were built between 1973 and 1975. "We've always tried to keep it up," said Rubman, in a small office above his medical practice. Old drawings and aerial maps of Green Meadows were spread out on the table in front of him, next to new, computer-generated architectural renderings. "But what we find is that the buildings were not built terribly well ... They're really showing their age."

Sopchak understands that things need to change at Green Meadows. She just wishes that it didn't have to uproot so many households. Residents, too, admitted that the buildings are in rough shape. Spaulding pointed out mold on her bathroom ceiling, and places where paint and drywall were peeling away from the walls.

It's not just the buildings that are in disrepair. Rubman said there's no water-management plan for the wet, low-lying property because it wasn't required at the time of construction. The new development will include three retention ponds and extensive storm-water management plans. Rubman said the units will be better protected, too; they'll be outfitted with a sprinkler system to protect against fire.

Over the years, structural issues at Green Meadows have given rise to other problems.

"At times this has been called 'Slum Meadows' rather than 'Green Meadows,'" said Rubman. He said he's seen drug raids and arrests, and that the attorney general has threatened to close down the complex if Rubman didn't evict drug-dealing tenants.

With the makeover and rebranding, Green Meadows will also get a new name: "The Village at Autumn Pond." There's a beaver pond tucked out of sight in a nearby wooded area, but no "Autumn Pond" to be found. Rubman said he just liked the word: "'Autumn' has a nice feel," he said.

Paging through the architectural plans, Rubman said that the new development would be "a safer and better environment for tenants."

"I feel badly about displacement, but I've also owned and run this community since 1981," said Rubman. His point? Rubman said he's been told, time and time again, that major changes would be necessary at the apartment complex at some point in the future. "I've delayed and delayed it," he said.

Rubman said that he tried to plan for the evictions. He and his son, who runs the property-management firm that oversees Green Meadows, stopped renting out vacant apartments in the complex's other two buildings a month or two ago. The hope was that departing tenants would free up space so some renters in the soon-to-be-demolished units could move over. But there was less turnover than they expected.

Quintin, a teacher in the infant room of a childcare center, hasn't found a new rental yet. She wants to stay in Essex because, at 61, she isn't interested in commuting on icy roads in the wintertime. Quintin receives a Section 8 voucher, which subsidizes her rent, and she's put her name on the wait list for a senior-housing project. But even with the subsidy, Quintin is worried she won't be able to find another apartment in her price range; her current apartment costs $750 a month.

"Maybe it's a good thing," she said. "Time to declutter my life, move on."

Where that might be, though, she doesn't yet know.