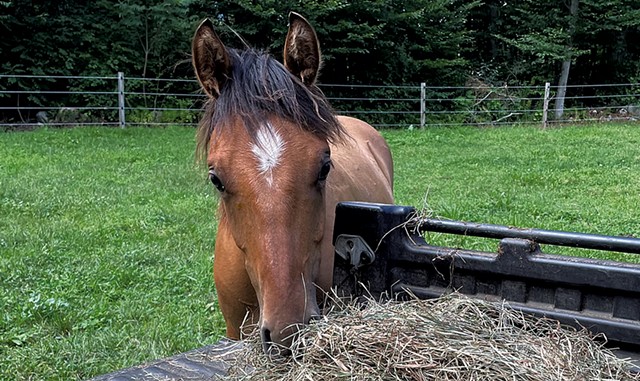 For the past nine years, Jen Straub and her southern Vermont nonprofit, Dorset Equine Rescue, have taken in more than 200 horses.

They come from all over the Northeast in all ages, breeds and sizes. Some have been seized by law enforcement investigating animal neglect and cruelty cases. Others were left homeless after their owners had divorced or died. Some can still be ridden, while others are better suited as "pasture companions" for other animals, according to Straub.

No matter what, they all need a place to live.

"Our mission is to rescue, rehabilitate and re-home abused, neglected and slaughter-bound horses," Straub said.

The pandemic has only increased the need: In 2020, the group received more than 20 "surrendered" horses, the most ever, and adopted out about that same number. Straub currently has a dozen horses on her five-acre East Dorset farm, while another 12 or so are in foster homes.

With limited space and funds, Straub has had to turn away horses, except for the ones in the most dire situations. Often, people want to get rid of horses once they're no longer ridable, "which is sad but true," Straub said. Her organization is really intended for abused and neglected horses.

So, Straub and Lilli Biedermann, a supporter of the nonprofit, came up with another way to help horse owners in need: the Vermont Hay Bank. Launching on October 5, the fund will provide people with a month or two of vouchers to buy feed for their horses. By providing temporary stability to someone in need, Straub hopes to prevent animals from becoming neglected or getting shipped off to auction. The equines that are auctioned often end up in the slaughterhouse.

"We're really designed to be short-term," Straub said. "We don't want to get into buying feed for someone's horse for the whole winter."

The bank has raised more than $6,000 so far, but Straub expects it to go quickly: Hay for just one horse can cost a couple hundred dollars a month.

"We're turning away horses weekly," Straub said, "because there's just so much need."