An Epic Bucket List to Help You Plan Your Summer

Traditionally speaking, summer of 2018 includes 99 days spanning Memorial Day to Labor Day. Technically speaking, we have even less time: 93 days, 15 hours and 47 minutes, to be precise — June 21 to September 22. And then there is the cold, hard truth: Summer in Vermont might be all but over by the time you finish reading this paragraph.

OK, we exaggerate. The warm-weather season in Vermont is woefully brief, but that doesn't mean it can't be chock-full of adventure. Taking full advantage of summer's fleeting bounty requires a bit of planning: You need a bucket list.

To that end, we've compiled an admittedly exhaustive list of stuff to do. It's unlikely the average Vermonter could get to even a quarter of the activities presented here. But use our suggestions as a guide, and you'll be on your way to an epic summer.

You already know Vermont is scenic AF. But you may not realize just how gorgeous the Green Mountain State is until you've experienced it from a bird's-eye view: soaring silently, several thousand feet up in the air.

The longest privately owned toll road in the country, Skyline Drive winds 5.2 miles up the mountain. From the 3,848-foot summit, you can take in a panoramic vista overlooking five mountain ranges: the Green Mountains, White Mountains, Taconic Mountains, Adirondacks and Berkshires.

True, it's not the hippest way to spend a hazy Sunday evening. And the community orchestra might not be the tightest ensemble around. But there's something undeniably wholesome and charming about sitting in the grass listening to the concert band play its way through John Williams medleys, John Philip Sousa marches and orchestral pop-rock classics. The Burlington Concert Band performs Sunday nights from June 17 through August 12 at Battery Park in Burlington.

And while you're there ... eat a cheeseburger with Michigan sauce from Beansie's Bus.

Vermont's newest state park opened to rave reviews last summer. In addition to miles of scenic trails, it offers a serene, immaculately cultivated Japanese garden as its crown jewel. The soothing waterfalls and koi ponds alone are worth the trip.

Go to at least one of the following small outdoor music festivals:

Go tubing on the White River. 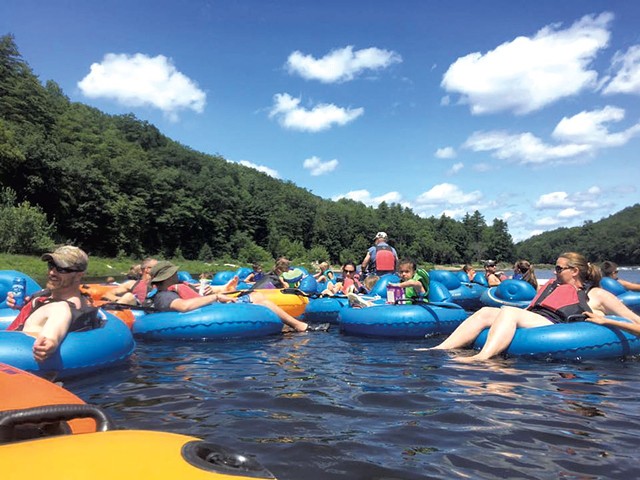 Few activities are more quintessentially summer-in-Vermont. Tweed River Tubing in Stockbridge is one of several local companies that take the hassle out of spending a day bobbing in the current. Tube rental includes a life jacket and a free shuttle back to your car at the end of the trip.

Eat as many creemees as you can from:

Visit any or all of these Vermont vineyards:

*Update, July 9, 2018: Since this story was published, the Champlain Causeway and the bike ferry have both reopened after spring storm damage.

The original print version of this article was headlined "Summer Vermonting"