Want to lower your household’s greenhouse gas emissions but don’t know where to start? Mike Fink has some suggestions. Fink works as an energy data analyst for Efficiency Vermont. He’s somewhat obsessed with reducing his carbon footprint, and not just because of his job.

Initially trained as a chemist — Fink has a PhD in chemistry from the University of Oregon — the 43-year-old grasps the severity of the climate crisis; it’s what prompted his career switch.

“I'm really concerned about the increase in carbon emissions,” he says. “It's alarming that there's a compound in our atmosphere that's gone up in concentration by 24 percent since I was born.” 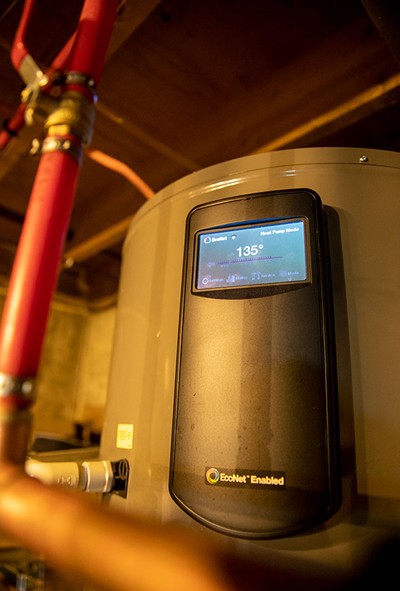 In addition to his work for Efficiency Vermont, Fink has used his scientific training and data skills to analyze his own household energy consumption. When Fink and his wife bought their 2,000-square-foot house in Essex in 2016, he realized that this was his chance to have an impact on climate. He estimates they’ve been able to reduce their reliance on fossil fuels by 59 percent. He’d like to see his emissions drop to zero. His ultimate goal, beyond having a net-zero home? “To see Vermont become a net carbon sink rather than an emitter,” he says.

To help us get there, Fink has collected some of the efficiency lessons he’s learned. The former high school science teacher has shared them in presentations for colleagues and for others in Vermont’s tech community, illustrating his points with graphs, goofy drawings and photos of his kids. His tone is unfailingly enthusiastic and encouraging.

Many of his improvements are what he calls “win-wins” — they cut carbon emissions and also make his house warmer, or save him money. Read on to find out more about a few of them.

Fink says the most important thing to remember is that shrinking your home’s carbon footprint is a journey. “There’s not a ‘right’ path,” he says. “It’s going to be different for everyone.”


Start With an Energy Audit

The first step is getting an energy audit. Efficiency Vermont can help you find a licensed local contractor who can perform one.

Fink got one right after buying his home, and it helped him understand its weaknesses — and strengths. Those are important, too, he says. Identifying the positives helps you feel that you’re making progress. Fink discovered that the previous homeowner had already made some useful improvements — such as sealing the basement and putting cellulose insulation in the attic — which were essential for increasing energy efficiency.

The audit also pinpointed opportunities. At the time, Fink’s home was heated by oil and an aging wood stove. He learned that the house’s layout made it ideal for wood heat, and that it was perfectly situated for solar panels. That helped him determine some of his first priorities.

It also gave Fink a list that he could work from whenever he was considering making improvements. 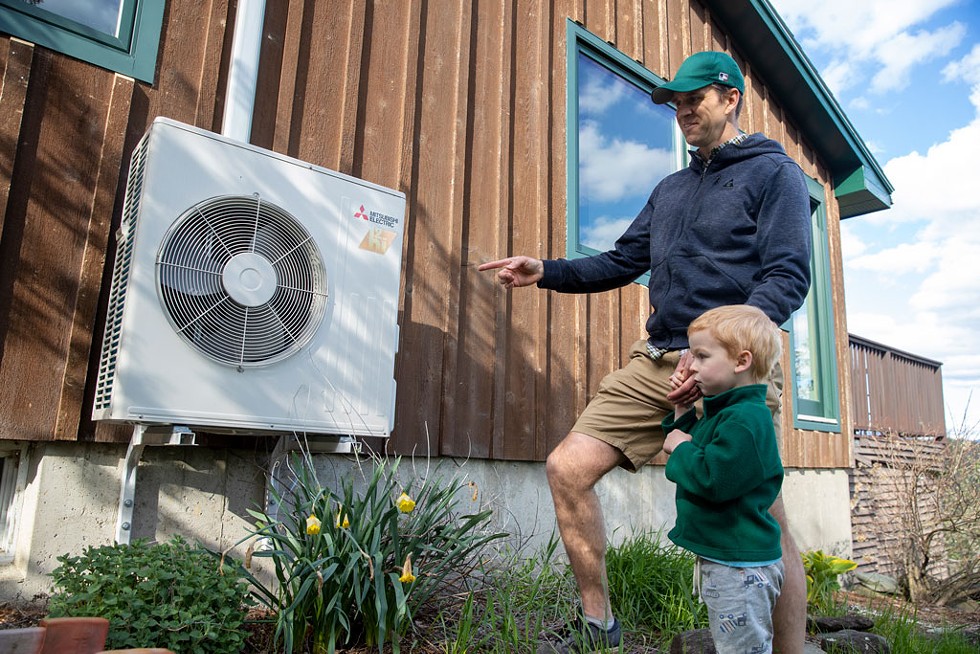 Fink divides home energy use into three main categories: heating, transportation and the electricity needed to power lighting and appliances.

When he and his wife bought their home, he estimated it was emitting roughly 5,500 kilograms of carbon dioxide per winter. In order to cut that roughly in half, they installed a new wood stove with a catalytic converter, which makes it more efficient and cuts down on particulate emissions. “It works great, I really enjoy it,” Fink says. They also purchased a cold-climate heat pump that was recommended by the energy auditor.

The heat pump is one of Fink’s favorite improvements. “It handles about half of our heating load during the winter,” he notes. The wood stove accounts for most of the rest. This winter, he estimates just 5 percent of the family's heat came from oil. “We haven’t had to pay an oil truck to come,” Fink says.

Fink concedes that the up-front cost for two heat pumps was “formidable” — about two to four times as much as less-efficient alternatives. He points out that both are saving the family money in the long run, and both have relatively short payback periods. It’s just harder to see those savings right away.

“Nobody sneaks into your room and leaves a few dollar bills on your night table while you’re sleeping,” Fink jokes. “But that’s what you’re saving every day” — in addition to saving on carbon emissions.

And when you’re upgrading appliances or light bulbs, look for the Energy Star label. Every little bit helps.

Generating your own electricity isn’t always an option, but Fink’s energy audit showed that it made sense for his household. Over the last few years, they’ve installed 40 solar panels on the roof of the house that produce about 70 to 80 kilowatt hours of electricity on sunny days.

They also installed a Tesla Powerwall home battery to store the energy to be used later, which they got through a Green Mountain Power pilot program; Green Mountain Power actually owns it. “They install it in your basement for a fraction of the cost of the battery,” says Fink. One advantage: “You can use it if the power goes out!” 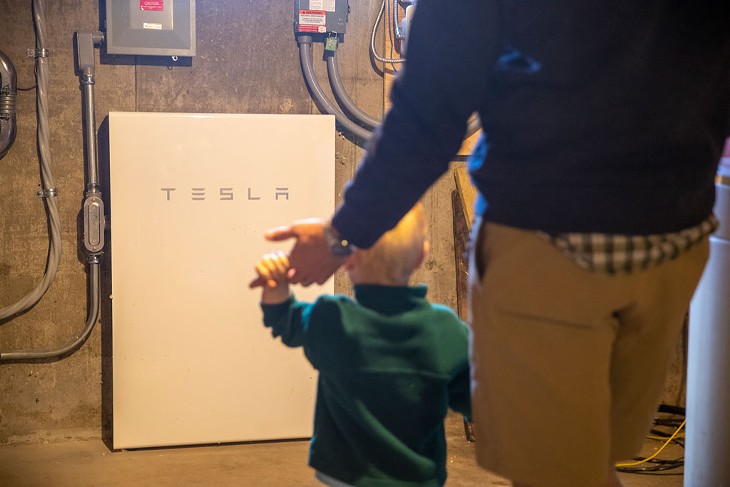 The solar panels are saving carbon emissions — and money — Fink says, but they were expensive. After tax credits and incentives, the 22 panels cost about $24,000. They’ll earn that back in about nine to 11 years, according to an estimate. Still, “you can get started in the solar game for way less,” Fink points out.

He recommends that anyone considering this option first do some research. Figure out whether you can pay for the panels up front or whether you’ll need to take out a loan. Investigate available tax credits and rebates. Fink points out that it may also be possible to rent the panels, resulting in lower power bills while they’re installed at your house.

If an upfront expense isn’t an option, Fink suggests finding a company that will allow you to buy a few shares of production from a community solar project. That will at least green up your power supply. 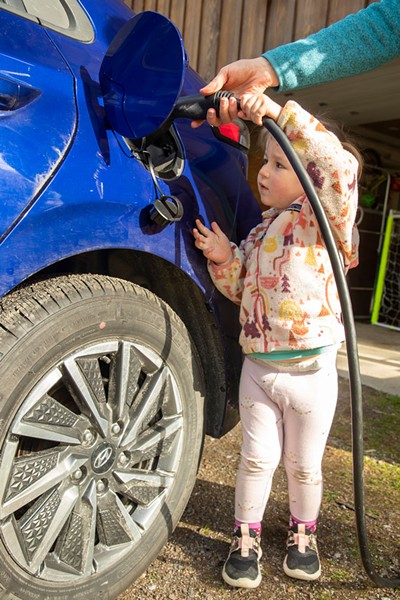 To further reduce your carbon footprint, Fink recommends switching to electric power whenever possible. He notes that Vermont’s electricity is some of the cleanest in the country. “GMP’s power supply, for example, is 95% carbon free,” he says. As a result, electrical solutions are the cleanest way to do nearly every task in Vermont.

He and his family leased an electric vehicle last summer — a Hyundai IONIQ EV. He estimates it’s cut their transportation-related carbon emissions from more than 6,000 kilograms a year to about 4,000.

“In general,” Fink says, “I’ve been really happy with it. It’s by far the most technologically advanced vehicle I’ve ever driven.”

He has one caveat, learned the hard way — don’t let your kids push the buttons. They might unintentionally run down the battery.

Fink also suggests using electric garden tools, such as leaf blowers, lawnmowers and hedge trimmers. He’s switched to using an electric chainsaw for small jobs — “it isn’t appropriate for taking down big trees,” he says — and an electric snowblower. “I really like these tools in general,” he says. “They’re so much quieter, and there are no fumes from the gas.”

Fink knows that improving your home’s energy efficiency can seem overwhelming, but you don’t have to do everything at once.

”That first step felt difficult,” he says of his own family’s journey. “But after that, every additional step just felt easier and easier.”

For more information about how to make your home more energy efficient, check out this guide.

This advertisement for fighting climate change was commissioned and paid for by Efficiency Vermont.