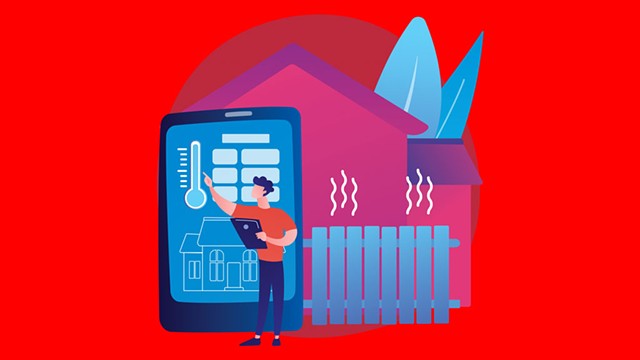 After two decades in the energy efficiency business, Wayne Thompson doesn't necessarily have to walk inside a house to know where it's losing heat. Sometimes he can spot the problem from outside, whether it's icicles hanging from the gutters or a bare patch on an otherwise snow-covered roof.

"I love that, because it makes my job easy," he said.

Still, a thorough home inspection is always part of the job. Thompson works for Vermont Gas Systems as a building analyst and energy auditor, helping customers make their homes more comfortable and their bills more affordable. Heading into the winter months, Thompson's schedule fills up with Vermonters who want to seal up their leaky old — and sometimes not-so-old — houses, save money, and reduce their natural gas consumption.

What's unique about the program, Thompson explained, is that it provides soup-to-nuts assistance. "We kind of hold the customer's hand through the whole process," he said. That process includes an initial home inspection to identify problem spots, finding the right contractor and setting up financing, if needed, for making improvements.

It all begins with the homeowner. Any of VGS' 53,000 customers are eligible to sign up, through the company's website, for either an energy efficiency snapshot or a comprehensive audit. (The home's average energy usage determines which program the customer receives.) Both services are free to VGS account holders.

Thompson starts his audit with an external inspection of the house, during which he checks for potential safety issues, especially gas leaks. In the process, he measures the house, notes the number and size of the windows, and determines how much of the living space is above ground level.

Next, Thompson walks inside with a carbon monoxide detector to check for the colorless, odorless gas. He said he's been surprised by how often he's visited homes with dangerously high levels of the deadly gas due to a burning kerosene heater or an improperly vented stove.

After his initial conversation with the customer and "warming up to each other," Thompson said, he begins his inspection in the basement, again checking for gas leaks. While there, he evaluates the water heater, the heating system and its ventilation, and the foundation to see if it's properly insulated or needs upgrades. If he discovers any safety concerns, he asks a service tech to fix them immediately.

If the kitchen has a gas range, Thompson checks the vents, then he moves on to bathroom fans and other mechanical ventilation. In the winter, Thompson uses an infrared camera to scan the ceilings and walls for inadequate or missing insulation. He walks through every room in the house to identify problem spots, including the problems that are easiest to fix: open windows.

"The customer always tells me that they're closed, but they're not," he said. "I had a college kid who was wondering why he had so many flies. I told him to close the window and it'll fix his fly problem."

When Thompson conducts a comprehensive energy audit, he puts the house into "winter mode" by closing all doors and windows and does a blower door test, usually in the front door. This begins with an attic inspection to make sure there's no vermiculite, or asbestos-based, insulation, which can pose a health hazard to the residents.

While checking the attic, Thompson might spot one of most common culprits for heat loss: under-insulated or non-insulated attic hatches. Often the hatch is nothing more than a piece of thin Sheetrock.

"When I show that to the customer I'll ask, 'Would you have this piece of Sheetrock as an exterior door?'" he said. "That turns the light on for them."

Next, Thompson sets up the blower door test, which is essentially a large fan inserted into the doorframe to create negative pressure inside the house. Thompson slowly brings the house to a test pressure of 50 pascals, which essentially draws air in through cracks and crevices, to see how much the house leaks. He likened it to a 20-mile-per-hour wind blowing through the house.

Thompson runs the blower door test for about five minutes to gauge how many cubic feet of air per minute the house loses. A typical house, he said, with a reading of 1,000 CFM, leaks about as much air as a one-square-foot hole would in an exterior wall. Leakier houses, especially those more than 50 years old, can get readings of 10,000 to 20,000 CFM.

Thompson's home inspection and testing typically takes about three hours. Afterward, he writes up a comprehensive report that includes "the good, the bad and the ugly," as well as recommendations for tightening the building envelope.

Which home improvements provide the biggest bang for the energy buck? Attic insulation and hatch sealing, Thompson said. He compared this to "putting a lid on a pot when you're trying to boil water."

Among the improvements that offer the least cost savings, he noted, is window replacement. Many homeowners assume they will recoup the full cost of new windows through lower energy bills. Though new windows may have a better R value, or insulating properties, in Thompson's experience the savings usually aren't dramatic.

Though he works for Vermont Gas, Thompson insists that his recommendations aren't motivated by a desire to sell more natural gas products. If it makes more economic sense to the homeowner to replace a gas heating system with higher-efficiency electric heat pumps, he'll suggest that. In fact, he has electric heat pumps in his own home.

Thompson said that helping customers be more dollar wise and energy efficient is the best part of his job.

"When a customer calls me and says that the promises I made them about doing the work — that they've seen it, felt it and experienced it in their bills," he added, "that makes my day."

Energy-Efficiency Tips for your home

The original print version of this article was headlined "Getting Warmer"