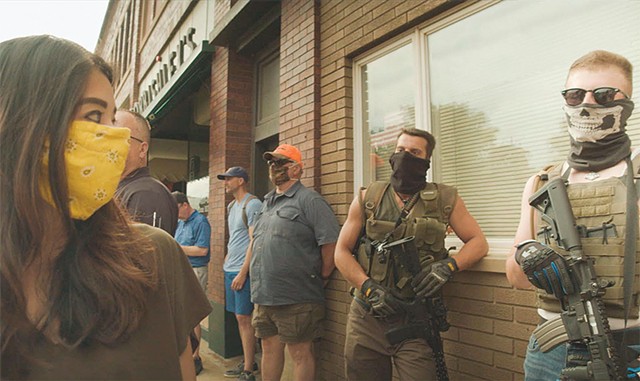 It's time again for the Middlebury New Filmmakers Festival, now in its eighth year and running from Wednesday, August 24, through Sunday, August 28, at various Middlebury venues. The fest offers a wealth of narrative films and documentaries, features and shorts, not to mention appearances by famous folks such as Maggie Gyllenhaal (discussing both her directorial debut, The Lost Daughter, and Secretary), actor Karen Allen and journalist Lindsay Crouse. For a full schedule of events and screenings, visit middfilmfest.org.

One of the many filmmakers set to appear at MNFF is David Siev, director of Bad Axe, which won an Audience Award at the SXSW Film & TV Festival this year. It's an intimate portrait of the director's Asian American family in a setting viewers might not expect: a neighborhood restaurant in a small town deep in Trump country.

As a teenager, Chun Siev survived the Cambodian killing fields. He came to the U.S., where he married a Mexican American woman named Rachel. In 1998, the couple opened the first incarnation of their "classy-casual" restaurant, Rachel's of Bad Axe, in the rural Michigan town of the same name. Their four children grew up in the business.

The documentary covers a period beginning in March 2020, just after the COVID-19 lockdown. Daughters Jaclyn and Raquel Siev, along with filmmaker David, have come home to Bad Axe with their significant others. Together they transform Rachel's into a pandemic takeout joint, fighting to keep their parents' dream alive.

But in May, after the murder of George Floyd, rising political tensions test the long-established ties between the restaurant and the community. At a Black Lives Matter protest, Jaclyn confronts members of a local militia, who call her a racial slur. As the younger Sievs become more vocal in their convictions, the restaurant receives threats and hate mail. Some patrons resist the mask requirement. Can the Sievs' dream survive in an increasingly violent America?

Early in the film, David says, "I always thought my family had an important story to tell." That's true. Yet what makes Bad Axe such a compelling portrait is not so much the weight of the story as the vividness of the characters and the intimacy with which we come to know them.

Like every family, the Sievs offer an interplay of louder and subtler personalities. Jaclyn dominates the screen with her dramatic intensity, whether she's arguing with racists or begging her parents to take pandemic precautions. At moments, she might remind you of a reality-show diva, but the filmmaker makes sure to show us that his sister's grandstanding comes from a place of caring for her loved ones. When she tends painstakingly to a disabled pet, we see her softer side.

Jaclyn clearly gets her temper from her dad, who also emerges from the documentary as a fascinating figure. At first, Chun seems like a smiling, roll-with-it kind of guy who hasn't allowed himself to be affected by the horrors of his youth. That's the face he presents to customers. But he's spent his life finding ways to ensure his family's safety, teaching martial arts and wielding shotguns. (As he points out, there's nothing unusual about his safe full of firearms in Bad Axe.) When Chun fears that political activism could make the family and their business a target, he and his daughters butt heads.

Bad Axe offers a timely study of small-town dynamics, posing the question of whether neighborly bonds forged over good food can withstand the toxic forces of racism, intolerance and acrimony. On social media, we're used to seeing fully formed, polarized positions, but the film shows us people with nuance and capacity for change. The restaurant's event coordinator talks about voting for Donald Trump in 2016 and how subsequent events changed her politics. Raquel's boyfriend, who is Black and was raised by white adoptive parents, admits that he feels uncomfortable speaking out about racism, but he still attends the protest.

The film also explores a generational divide between the elder Sievs and their more outspoken children. If the restaurant is an immigrant success story, it's partly because Chun and Rachel "assimilated in the way that people expect them to," Jaclyn says at one point. "My parents are good at biting their tongue." She, by contrast, refuses to sugarcoat her convictions.

Ultimately, though, the power of family love — not to mention food, fellowship and goofing around — overrides such disagreements among the Sievs. Whatever the future has in store, they're firmly rooted in a community they believe in.

"You want it to get better," Jaclyn says of Bad Axe, summing up one reason why progressives don't just leave red states. "You don't want to just write it off."