An Artist Is Creating Natural Installations at Three Vermont Preserves 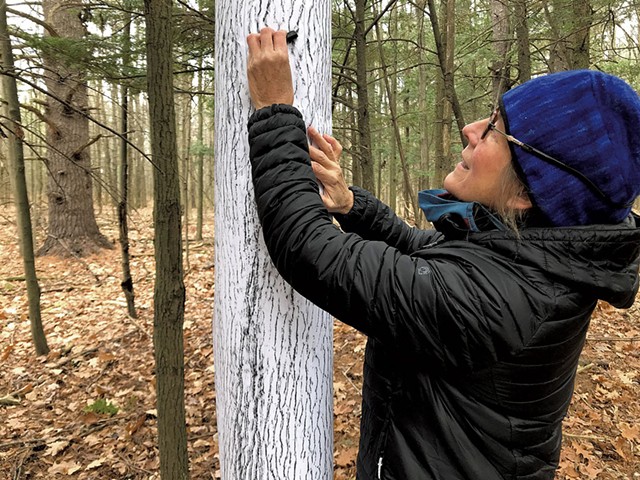 An anonymous benefactor is funding an artist who will create natural, interactive artworks at three Vermont preserves owned by the Nature Conservancy.

Elizabeth Billings of Tunbridge will serve as artist-in-residence, spending the next several months constructing the works, which will be displayed at the Equinox Highlands Natural Area in Manchester, Raven Ridge Natural Area in Monkton and LaPlatte River Marsh Natural Area in Shelburne. Since September, Billings has visited the sites frequently to observe the changing seasons, angles of light and weather.

"Spending time getting to know them, looking at patterns in nature — it's been great!" she said.

Billings is keeping visual journals of her experiences that she'll release on the Nature Conservancy website in the months leading up to installment of the pieces, which will likely occur sometime in May.

"There are a lot of ideas swirling around," Billings said. "They're not ready to be tossed around yet — outside of my own head and heart."

The installations are part 60th birthday celebration for the Nature Conservancy's Vermont chapter and part tribute to those who have visited the organization's 58 natural areas, encompassing more than 300,000 acres across the state, according to the nonprofit's communications director, Eve Frankel.

Trail usage has spiked this year during the pandemic. Raven Ridge, for instance, is on a record-setting pace for visitors, probably because "the natural area is welcoming to folks of all abilities, has opportunity for solitude and connection, and provides a rich showcase of natural diversity right in our backyard," Jack Markoski, the conservancy's stewardship and volunteer coordinator, wrote in an email.

Frankel said the nonprofit has emphasized creating places that are accessible for all. Raven Ridge has a long section of boardwalk, and the outdoor org's future projects will install more of the same at different areas, Frankel said.

"We assume that there's access to nature everywhere, but sometimes it's more challenging," she said. "We have found how much we need it during this time."

Correction, January 12, 2021: A previous version of this story misstated the number of acres the Nature Conservancy has conserved in Vermont.