An Artist Finds Her Niche in Drawing Animals 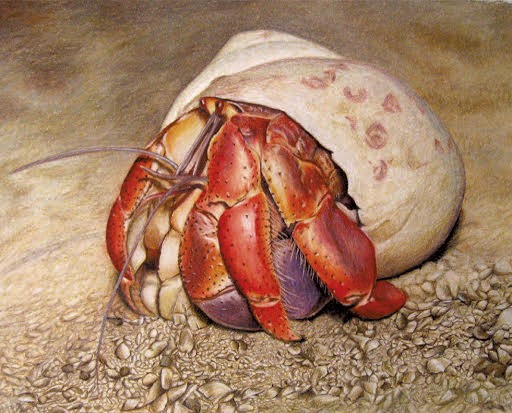 In 2008, Corrina Thurston got a migraine that never stopped. Loud sounds and bright lights hurt her head. She didn't sleep, and she could barely walk. Confined to a dark room, she had to drop out of St. Lawrence University in her first year.

Prior to her illness, the now 27-year-old Barre native did not consider herself an artist; when the mystery malady struck, she was pursuing a double major in biology and anthropology.

Two years into her ordeal, in 2010, Thurston started drawing with colored pencils, propped up in her bed back home in Vermont. Today, she's using her newfound talent to focus on a subject she loves — animals — while giving a portion of her sales to organizations like the World Wildlife Fund and the Humane Society of the United States.

The motivation for taking up art? Thurston says she had to focus on something other than the pain, which she describes as "excruciating." So, the artist says, "I picked up an old poster board from high school and a No. 2 pencil, and I started sketching." Looking at her creation, a female nude seated on a lily pad, Thurston felt something was lacking. So she began layering in colored pencil, building up the pigments to create a vibrant scene.

Thurston was smitten with the medium. In that first drawing, "I wanted to use as many colors as possible, so she's purple with orange highlights and orange hair, and she's on a green lily pad with blue colors all around her for water — although, of course, it didn't look anything like water," she says with a smile. "My mom has it hung up on the wall, even though it's all ripped and torn up."

That scrappy drawing launched Thurston's career as a colored-pencil artist. She learned at a "very quick" rate, she says, with most of her drawings ending up on display. Soon after her poster-board creation, she was drawing hyperrealistic portraits of animals, all while fighting her still-undiagnosed illness.

"Being stuck in bed, this was the only thing I could possibly focus on," Thurston says, "even if it was for a short amount of time each day — it took energy."

After four years of drawing between bouts of pain, Thurston was diagnosed with chronic Lyme disease, Bartonella, Hashimoto's thyroiditis and two types of pneumonia. She started treatment in 2014.

Now able to leave the house on her own, Thurston met this reporter in a noisy café in downtown Burlington, a 50-minute drive from her home in Barre. "I don't have to worry as much about a sudden migraine [popping up] so that I will be completely gone. I'm doing a lot now," she says.

With her freedom restored, she has turned her artistic skill into a business named after initials, C.A.T. Studios. Her detailed drawings of animals have been shown in the S.P.A.C.E. Gallery and Art's Alive Gallery at Main Street Landing's Union Station in Burlington, among other locations. Thurston takes commissions for animal and family portraits and, on her website, sells prints, mugs and jewelry bearing her drawings. She just published her first book, How to Build Your Art Business with Limited Time or Energy, through Amazon Digital Services. 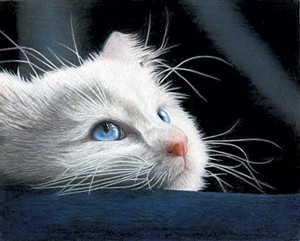 It sounds like a lot of work for someone who says she can be struck with a migraine at any moment, but the artist is doing it her way. When she does commission work, Thurston says, "They can't put me on a deadline. They know that I'm going to get to it as soon as I can, but if health stuff comes up, I can't control that I can't draw for a month."

This summer, Thurston has temporarily stopped taking commissions to focus on two larger projects. First, she's experimenting with drawing directly on wood, then varnishing and lacquering the finished product to preserve her efforts. Second, she's working on a series of black-and-white drawings of endangered species.

The first image she completed in that series was a portrait of an African elephant with a stark white background, which won the Artist's Choice award at this year's Art's Alive Festival of Fine Arts. "I've started my next one, which is the black rhino," Thurston says. "[The point is] to really bring attention to this enormous animal that isn't going to be here in 50 years — if we don't do something."

Why the animal focus? "We've always had cats growing up, and wildlife in general fascinates me, and I'm really passionate about wildlife conservation," Thurston says. "I guess animals are just kind of my thing. I'll never run out of things to draw."

The original print version of this article was headlined "In Wake of Illness, Artist Finds Her Niche Drawing Animals"