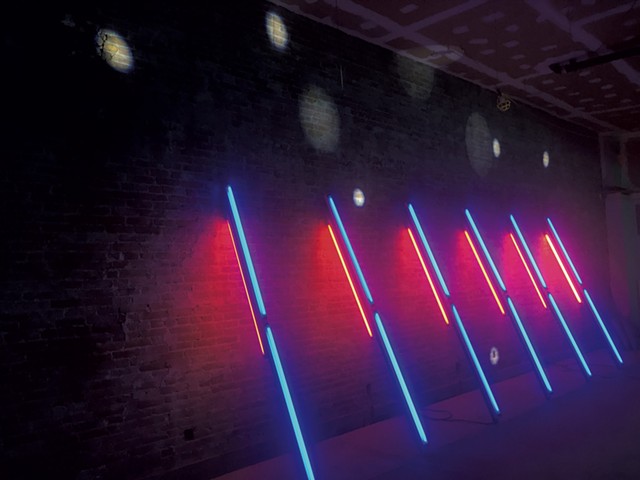 The most obvious divergence between this and Overnight Projects' four prior installations is that viewers need not be inside the space to see the work. Automatic timers activate the installation every evening from 5 p.m. to midnight, and the electric bars of light and ethereal color fields they create can be spotted even from the far end of the Winooski traffic circle. Passersby on foot or in vehicles simply cannot miss it.

"With these installations," Jeffrey wrote in an email, "I'm hoping to get people to notice that something in their environment is a little different — that the vacant space they are used to [passing] by and ignoring has been transformed in some way."

This is Jeffrey's fifth such project since 2012, and his first outside of Montpelier. The installations emerged from his career as a stained glass artist, illuminating an unexpected but simple link between a centuries-old craft and the hypermodern legacy of artists such as Dan Flavin, Robert Irwin and James Turrell.

"My interest in making [these environments]," Jeffrey wrote, "grew out of my dawning realization that what I love about being a stained glass artist isn't so much the imagery of the windows I am building; it is more the intensity and richness of the colors, and the light that creates and amplifies those colors."

The nomadic Overnight Projects seeks to match artists with empty and often historic spaces. "Chris definitely responds more to the architecture [of a space] than to its history," noted Abbey Meaker. She and Sarah O Donnell launched Overnight Projects in 2015, recently adding Seven Days arts writer Sadie Williams to their team. Meaker and O Donnell had wanted to work with Jeffrey since seeing his "8 Items or Less" installation on Montpelier's Main Street in November 2015, they added.

For "Fluorescent Light," Jeffrey has filled the storefront's primary space with two large installations. In the first of these, six stark constructions, each made from three light tubes, lean against the exposed brick wall — a feature of the building that Jeffrey "particularly wanted to draw attention to," he noted. Above the tubes, small spotlights beam circles of various sizes. Jeffrey didn't choose the colors of the plastic sheaths that encase the lights (red and blue) until he had fully conceptualized the sculptural elements.

The second of these large installations is a zigzag of green, purple and blue that spans the entire eastern wall. The tubes are arranged at sharp angles toward the back of the space and spaced more broadly toward the front of the building. Jeffrey has also filled two smaller alcoves with light.

"This is a small space that feels big because of the work," O Donnell said. From the back of the building, the reflection in the front window causes Jeffrey's red-and-blue installation to appear to extend outside and into the street.

Industrial, modern and ephemeral, Jeffrey's installation may serve as an apt metaphor for downtown Winooski, a place that is seemingly always under construction and in transition. No matter what, the work is entrancing. As O Donnell put it, "Art on the walls is easy to walk by."

For those itching to get inside — and the work really should be seen from inside as well as out — a public reception will take place on Saturday, February 25.

The original print version of this article was headlined "Art In Downtown Winooski, Everything Is Illuminated"