An Architectural Philosophy: Buildings for People in Need

The Cornell University-trained architect was speaking mainly to a knowing audience of fellow architects and designers. But even for members of the public listening that night — the lectures are open to everyone — he had a point. The buildings people remember are the large, impressive ones commissioned by clients with deep pockets. Mies van der Rohe's Seagram Building in Manhattan, for example, is the marvel it is because the Canadian distiller heiress Phyllis Lambert persuaded her father to be unstinting.

For Wisniewski, though, architecture has meant something different since he moved to Burlington in 1979. He and his partner, Bob Duncan, renovated the former Wilson Hotel in downtown Burlington for the Committee on Temporary Shelter in 1986, launching their career as Vermont's preeminent architects of housing and community development for low-income people. Their clients are usually collaborating nonprofits; DWA has worked with four regularly: COTS, Cathedral Square Corporation, the Burlington Community Land Trust and the Champlain Housing Trust.

In his talk, Wisniewski ran through slides of at least 15 of the firm's most notable affordable projects, from renovations to new buildings to fully planned neighborhoods. Among them: a historical renovation of Swanton School for senior housing, the Chittenden Emergency Food Shelf in Burlington, the Forest Park neighborhood development in Rutland, the Health Center in Plainfield, the Canal Street Veterans Housing in Winooski and the recently completed Harrington Village, a walkable Shelburne neighborhood.

These living and other spaces are designed to allow in abundant natural light. Wisniewski's talk was titled "'A Clean, Well-Lighted Place': Our Adventures in Architecture for the Not So Privileged." The title alludes to the Hemingway short story in which an older waiter keeps a bar open for a single drunkard into the wee hours because he knows the patron may have no other clean, well-lit place to go. It's also a reference to Wisniewski's idol, the modernist architect Le Corbusier, who advocated for clean lines and ample light.

Unlike Le Corbusier's famous unité d'habitation social-housing projects, however, which eliminated pedestrian interaction in favor of car culture, DWA projects are designed to minimize the impact of parking and make the most of green spaces. In Harrington Village, much of the parking is hidden beneath three duplexes grouped around a central green. Parking at the Rose Street Artists' Cooperative in Burlington, one of the firm's historical renovations, takes up the former abandoned bakery's truck dock.

Many Duncan Wisniewski projects display unexpectedly pleasing details, given their limited budgets. At the top of the Lund Family Center building at McAuley Square in Burlington is a striking curved gable vent. The skin of the Veterans Housing in Winooski is a surprise: multicolored fiber-cement panels in earthy variations of brown. The colors are meant to help the building blend in with the Winooski River's red stone banks, which form part of the site's boundary. They also serve as a hopeful gesture toward veterans' eventual "camouflage," as the firm's website puts it — meaning reintegration — into society. 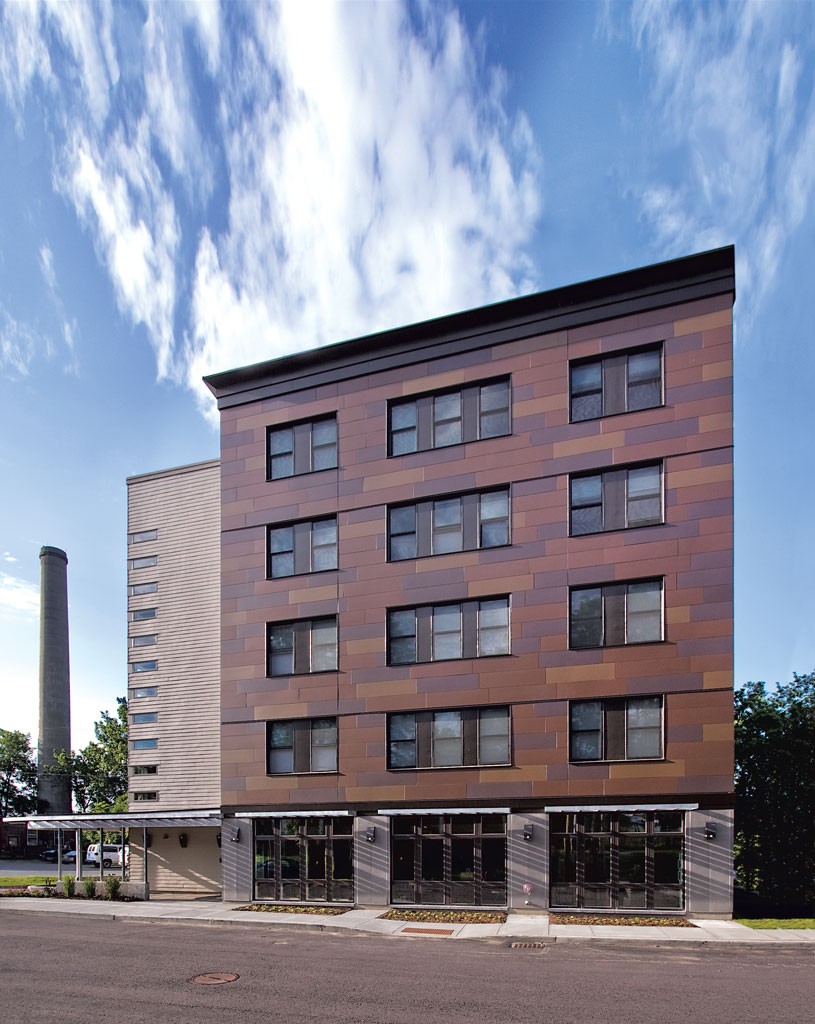 "We were all really astounded at how good it was," recalls TruexCullins principal architect Rolf Kielman. He was on the COTS board when the veterans' building, partly a project of COTS, was going up. The site was a difficult one, he notes: trapezoidal in shape with a sloping riverside edge. Referring to details such as the siding, Kielman comments, "I like the fact that they were thinking about more than what the people in the building need."

Wisniewski and Duncan may have had such thoughts in part because they both grew up "working class," says Wisniewski, who is from Buffalo, N.Y. His mother was a factory worker at Western Electric; his father, a printer. Duncan started out as a union mason like his father. Wisniewski studied psychology and worked as a carpenter before realizing architecture was his passion.

"Architects in general try to be visionary and experiment a bit," he says. Working in a firm with a social mission for clients with severely limited budgets, however, curtails the ability to take risks. The dilemma leaves him "constantly enmeshed in doubt. Am I compromising too much?" the architect admits to wondering. Yet Wisniewski also proudly cites the Burlington Shambhala Meditation Center, a beautiful rooftop addition with an interior lined in warm wood and a view of the lake. The meditation space was created on a $65,000 budget — a pittance in the architectural world.

Wisniewski, Kielman and fellow Vermont architect Roland Batten — whose life and architectural purpose his wife, Lynda Reeves McIntyre, memorialized by establishing the fund and lecture — all "pounded nails on each other's houses" when they first arrived in town, Kielman recalls. Wisniewski has "always been an exacting person," Kielman notes, obsessed with perfecting his hobbies (fencing, tango dancing, cooking) as much as the flow of his floor plans.

"Just look at the simple way they've done the shed dormers and trim [at Harrington Village]," Kielman suggests as a way to understand how the firm can create beauty on a smaller budget. "It's practical, friendly, aesthetically appealing." The pattern of the trim imitates that of older houses nearby, according to Wisniewski; it was an attempt to integrate the development with the surrounding neighborhood.

"Once in a while," Wisniewski admits with a laugh, "I'd really like to work for a wealthy client." But he also likens his art under constraint to that of the eponymous character in the short story "The Bound Man," by the Austrian writer Ilse Aichinger.

Wisniewski recounts the tale: A man wakes up in a forest bound from head to toe in rope. He can't remove the ropes, but he finds they're loose enough for him to hobble and hop. When he reaches the nearest town, he's spotted by a circus master who is amazed at his athletic contortions and makes the man into a hit circus act. The master invites the protagonist to take off his ropes, but he declines, even at night. There's just so much more to learn — so many more ways to create interesting movement — within their constraints.