An Aphasia Choir in Burlington 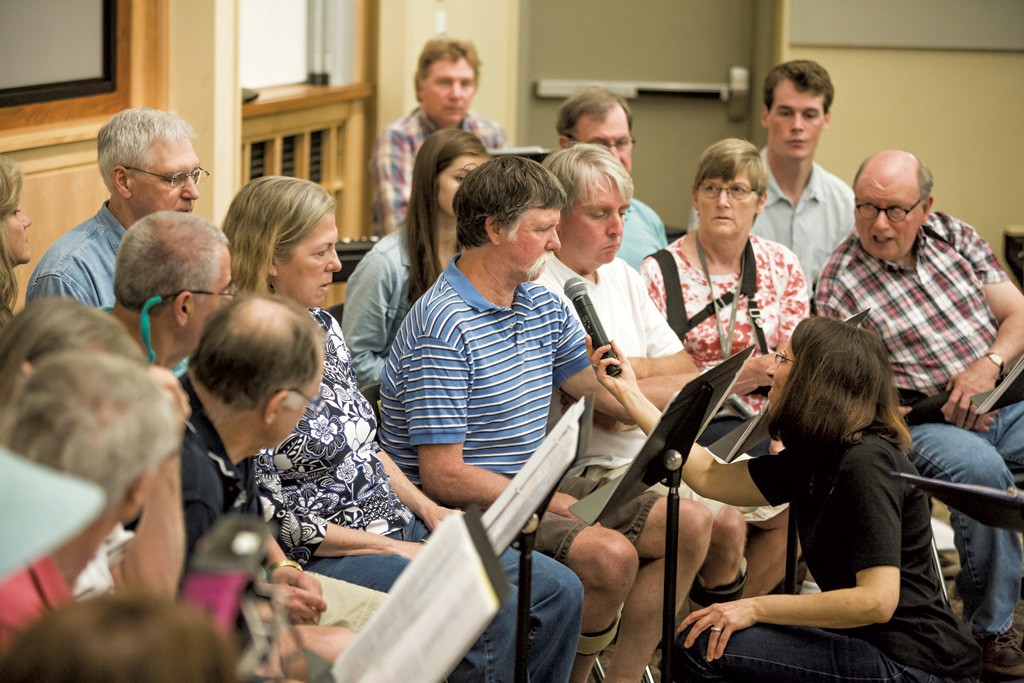 Six years ago, Julie Stillman was waylaid by a stroke so severe that, for a time, even a partial recovery seemed unlikely. The stroke not only partially immobilized her right arm and leg but also left Stillman — who, as a former writer and editor, made her living with words — with a painfully ironic condition: aphasia.

Aphasia is a neurological disorder, typically brought on either by a stroke or a traumatic brain injury, that impairs the ability to speak, read and write. For those who have it, aphasia is a phenomenally frustrating affliction, as it effectively locks up language in the brain, preventing victims from expressing fully formed thoughts and ideas.

Stillman, 60, who struggles to articulate and recall words, feels sufficiently strongly about aphasia to summon up a perfectly lucid bit of invective. "It sucks," she says, with a bluntness that lets you know she's not kidding. "Boy, does it suck."

But a novel treatment program has offered Stillman and 10 other people with aphasia a chance to express themselves in a remarkable way. They are the members of Vermont's first Aphasia Choir. Their first concert, which took place last Sunday at the Davis Auditorium at Fletcher Allen Health Care in Burlington, was a tremendously moving experience.

How can someone without the ability to speak perform in a choir? The answer, as medical science ascertains it, has to do with the complex, mysterious amalgamations of neural tissue that reside in our cranium.

The stroke survivors who performed in the Aphasia Choir all suffered a stroke in the left hemisphere — the part of the brain that has dominion over language, among other functions. The right hemisphere, by contrast, controls our response to the components of music: melody, harmony, pitch and so on. It seems that the brain "transforms" songs' lyrics into strictly musical information. As far as your brain is concerned, you're not singing the words "my dog has fleas"; you're singing four musical notes that get mapped atop meaningless utterances. And that's why some people with aphasia are perfectly credible singers.

The director and driving force of the Aphasia Choir is Karen McFeeters Leary, a speech-language pathologist at Fletcher Allen who specializes in working with adults with neurological disorders. Leary, 45, is also a well-regarded singer-songwriter who has released three albums of intelligent folk-pop. "I feel like my passion for singing and my passion for helping people have converged in my job," she says. "It's why I love what I do."

Leary recalls from her graduate coursework a story about a 19th-century man who had suffered a massive blow to the head; stripped of his ability to speak, he still allegedly sang fluently in his church choir. Her own research turned up only a couple of other aphasia choirs: one in California, one in Texas; both supported by large metropolitan hospitals. Leary's concerns about an insufficient local population for the choir were allayed when she found, via local stroke support groups, 11 willing volunteers.

The choir is twice that size, though, as each stroke survivor was accompanied during the concert by a spouse, friend or volunteer speech pathology student from the University of Vermont. "I wanted [the stroke survivors] to have some vocal support," says Leary. "Most of these folks have never sung in a choir, or ventured outside of the shower with a song."

For the same reason, Leary and the choir members, who've been rehearsing weekly since mid-March, decided that the program would consist of simplified arrangements of familiar pop tunes. Accompanied only by pianist Paul Webb, the singers took on nine well-known songs, including Bill Withers' "Lean on Me" and Neil Diamond's chestnut "Sweet Caroline." For the latter, the famous "BA-BA-BA" refrain was performed, in concert, on kazoos, a surprising and hilarious touch that made this crowd pleaser all the more pleasing.

More experimentally inclined choirs can twiddle with new arrangements of Arvo Pärt or Björk; Burlington's Aphasia Choir is all about allowing its members to find their voices. "This is not about a perfect performance," Leary says. "In fact, we don't care. Our goals were to have fun ... and educate the audience about aphasia."

To that end, Leary designed many educational materials and made them available to attendees. June, she points out, is National Aphasia Awareness Month.

The cost of staging the concert, as well as secondary expenses such as producing a rehearsal CD and binders of lyrics, was covered by the Fletcher Allen Auxiliary, a 200-member foundation that, through various charitable enterprises, raises money for the hospital.

Fletcher Allen Foundation development officer Yael Friedman, who oversaw the funding for the choir, says that Leary had no trouble making the case for a $1500 grant from the Auxiliary. "It's the most beautiful thing I've ever heard," says Friedman. "We were delighted to provide funding for it, and we're really hopeful we can find continued funding for it."

Leary, who directed the project as a volunteer, hopes that Sunday's performance was just the first of many. "I would really like to keep this going on an annual basis," Leary says. "I know there are more than 11 people in this community who have aphasia."

Before the show started, additional chairs had to be brought into the 150-seat Davis Auditorium, the better to accommodate an audience that surely ranks among the most supportive in history. The two standing ovations that the choir received were not necessarily for the quality of the singing, which was never the point of the concert. They were for the performers' tenacity and achievement. Nearly everyone — from Leary to the singers to cynical journalists — got choked up at some point.

The stroke survivors' voices were, at times, tentative, especially when they sang without their supporters' vocal accompaniment. But as the concert progressed, their voices grew bolder as their confidence visibly surged. On such songs as John Denver's "Take Me Home, Country Roads," the choir achieved genuinely lovely harmonies.

Leary says she knows that this concert, uplifting as it was, was not "some kind of magic bullet." While it doubtless boosted the singers' spirits, it did not "cure" their aphasia; nothing can. Still, she's seen anecdotal evidence of improvement in some of the singers' speech, perhaps brought on by the confidence that comes with taking part in a challenging experience. "There's something coming alive in these people," Leary says, "that I have been honored and privileged, to the point of tears, to witness."

Jeff Nagle, Julie Stillman's husband and a member of the choir, has seen his wife try just about every kind of therapy known to medicine. "I don't know if I'm saying this because I'm paying closer attention to it than I had been," Nagle says, "but I think her speech has gotten a little better over the last month." Nagle says he's noticed improvement in his wife's ability to articulate her words. "I think the singing is helping," he says.

The original print version of this article was headlined "Strokes Be Damned, an Aphasia Choir Starts Up in Burlington"