An Anarchist-Turned-Communist in Vershire Takes on Rep. Peter Welch 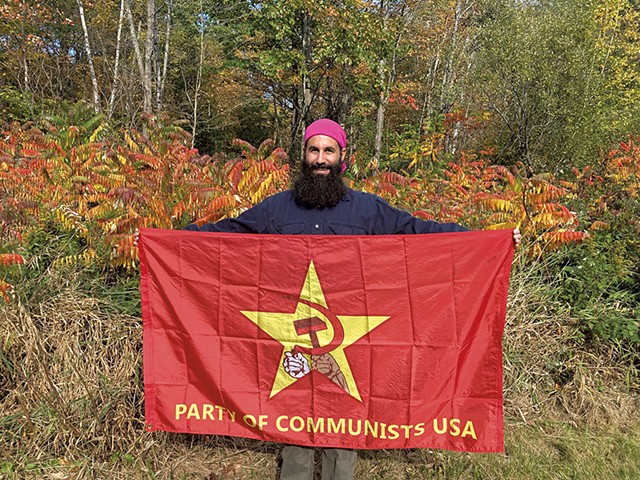 To most Americans, including many on the left, the term "communist" carries only negative connotations: ideological fanaticism, concentration camps, sclerotic economies. But Christopher Helali, a candidate for Vermont's sole U.S. House seat, wears that designation as a red badge of honor.

The bushy-bearded 32-year-old is running as a member of the Party of Communists USA. His challenge to incumbent Rep. Peter Welch (D-Vt.) marks the first appearance of a communist candidate on a Vermont statewide ballot since 1984. Gus Hall and Angela Davis ran that year for president and vice president on the ticket of the Communist Party USA (not to be confused with Helali's Party of Communists USA).

The program Helali espouses stands far to the left of Welch's liberalism and is more radical than Sen. Bernie Sanders' (D-Vt.) "democratic socialism." In a September 17 debate carried on Burlington-based CCTV, Helali distinguished himself from all six of his opponents — Welch, Republican Miriam Berry, and independents Peter R. Becker, Marcia Horne, Shawn Orr and Jerry Trudell — by calling for the elimination of the capitalist system and its replacement with a "workers' democracy."

"We need to nationalize all major industries and seize the means of production for the people," Helali declared.

Specifically, he said he wants to cut the $712 billion Pentagon budget "at least by half," bring home all 165,000 U.S. troops stationed in 150 countries, abolish the North Atlantic Treaty Organization and "end support for the apartheid state of Israel." The resultant savings should be used, he proposed, to provide free health care and education for all Americans.

In a recent interview on his 30-acre farm in Vershire, Helali said he has so far raised $1,200 for his campaign. Welch, who won a seventh term in 2018 with 70 percent of the vote, has more than $2 million available for his reelection effort. Helali said he harbors no illusions about actually unseating Welch but is instead aiming "to change the political conversation" in Vermont.

And that wasn't the only paradox on offer. Helali explained that he is aligned with the 6-year-old Party of Communists USA because he agrees with its critique that the century-old Communist Party has grown too cozy with the Democrats. Simultaneously, however, he serves as Orange County chair of the Progressive Party — which some Vermont leftists disdain for what they see as its own cozy relationship with Democrats.

Earlier this year, Helali noted, he volunteered for Sanders' campaign for the Democratic Party's presidential nomination, although he views Sanders as "not leftist enough." The Vermont senator has erred egregiously, Helali maintained, by steering his mass movement into backing Democratic presidential nominee Joe Biden's effort to defeat President Donald Trump.

Biden, in Helali's view, is "an imperialist and warmonger" and thus fundamentally indistinguishable from Trump. He says he'll be voting for Gloria La Riva, the presidential candidate of the Party for Socialism and Liberation.

A Massachusetts native and the son of a Greek Orthodox mother and Iranian Muslim father, Helali calls himself an atheist, although he earned a master's degree from the Holy Cross Greek Orthodox School of Theology in Brookline, Mass. That religious affiliation need not be seen as contradictory to his political views, Helali cautioned. His mother, a religious woman who was also a communist, taught him that those two creeds are "interconnected."

Helali's political odyssey has been odd indeed. He joined the U.S. Army Reserve in 2009 as an undergraduate at the University of San Diego, leaving the military six years later as a first lieutenant. Next, he studied Marxist philosophy for two years at a university in Wuhan, China. But he then entered what he described as a rebellious phase characterized by an emphasis on individualism and an embrace of anarchism.

In 2017, Helali traveled to the Rojava region of Syria. There, he fought on the side of the People's Protection Units, a Kurdish military force battling ISIS, the Islamist group that specialized in beheading apostates. Helali says he fired a version of the AK-47 assault rifle while taking part in a frontline assault on Raqqa, the capital of ISIS' self-proclaimed caliphate.

Kurdish political leaders in Rojava claim to practice a radical form of democratic decentralism modeled in part on the writings of Murray Bookchin, an anarchist philosopher who lived in Burlington for 35 years until his death in 2006. Helali, who's versed in Bookchin's works, was attracted by Rojava's social experiment. He said he went to Rojava as an anarchist but left nine months later a communist.

"On the ground, I came to realize that the revolution in Rojava wasn't all it said it was," Helali remarked. "It wasn't true that the rank-and-file people were involved in democratic decision making. The PKK [the governing Kurdistan Workers' Party] exercised strong central control." Rejecting "the utopian idealism of anarchism," Helali came to believe that a top-down approach was essential to the effective exercise of political power.

This turnaround "somehow induced [Helali] to join a party of authoritarians, the Communists," Janet Biehl, Bookchin's partner and chronicler, wrote in response to an email query about Helali's transformation. "Wow — if he ever really did read Bookchin, anarchist scourge of Marxism-Leninism, he must not have read him very carefully."

Biehl, a Burlington resident, has had her own firsthand experiences of political life in Rojava. She spent a month there last year studying the region's neighborhood assemblies and regional bodies. "I found that democracy may not be perfect but it's real and should be supported and encouraged," she wrote.

Helali moved to Vershire in 2018 after returning from the war. The property includes two other homes occupied by the farm's owners, who are related to his partner, Amanda Helali. She is the mother of the couple's 17-month-old son, Theodore, and works in an administrative office at Dartmouth College, making her the couple's primary breadwinner. Helali said he has held paid positions with the U.S. Census Bureau and on neighboring farms. He's also studying for a master's degree at Dartmouth in cultural studies and the anthropology of religion.

Helali has another child with a woman in Boston who claims he abandoned her and their baby to go fight in Rojava, he said, and a dispute with her over custody and support payments is playing out in court.

Boston is also the scene of another unhappy episode in the Helali saga. Leaders of that city's branch of the Industrial Workers of the World, a 115-year-old international union, charged in a 2017 statement that Helali embezzled $4,510 from the organization. Helali denies the accusation, saying the money was used during a local IWW feud to pay for a member's cancer treatment and to finance his own trip to Rojava. He's paid back the money, Helali said.

That Rojava foray, belittled by his IWW adversaries as an exercise in "war tourism," resulted in federal intelligence officials' inclusion of Helali on a list of U.S. activists with purported links to Antifa and the Kurds' war against ISIS. He's named in a U.S. Department of Homeland Security report dated July 14 and leaked to the Nation magazine. Titled "The Syrian Conflict and its Nexus to the U.S.-based Antifascist Movement," the document discloses the Social Security numbers and home addresses of the individuals it names.

During an "encounter" with U.S. Customs and Border Protection agents at the Derby Line crossing point in June 2019, Helali was found to be in possession of "numerous pictures of and physical items related to Antifa, anarchist materials and communist propaganda," the report states. He also "admitted to being an anarchist, anti-imperialist and socialist and was attempting to meet with fellow socialists and anarchists in multiple countries, including Cuba and Venezuela," the report adds.

The roster of radicals compiled by the Department of Homeland Security is creepily reminiscent of the blacklists of suspected U.S. communists assembled by congressional witch-hunters during the post-World War II McCarthy era. Live-and-let-live Vermont was not immune from the reds-under-the-beds hysteria of those years.

Historian Rick Winston, a former co-owner of Montpelier's Savoy Theater, recounts two such outbursts that derailed the careers of academics in Burlington and Lyndon.

In his 2018 book Red Scare in the Green Mountains: The McCarthy Era in Vermont 1946-1960, Winston tells the stories of Luther MacNair, who was forced to resign as dean of Lyndon State College in 1948, and Alex Novikoff, a University of Vermont professor of medicine sacked by the school's trustees in 1953. MacNair was hounded because of his support for the foreign-policy positions of left-wing presidential candidate Henry Wallace, particularly a call for a less hostile approach to the Soviet Union. Novikoff was driven out because of his refusal to provide a U.S. Senate subcommittee with the names of individuals with whom he was associated in the Communist Party while a student at Columbia University in the 1930s.

The anti-communist fury that raged throughout the country subsided after its instigators were discredited, and it was all but extinguished following the collapse of the Soviet Union in the 1990s. But the term "communist" remains tainted, Winston said in a phone interview.

"'Communist' is much more stuck in the past than 'socialist,'" he reckoned, agreeing that Sanders has soothed the sting that the latter term used to impart. "Real-world examples of communism have been so full of really bad lessons for anyone who wants to go forward politically," Winston observed.

He also noted, however, that U.S. communist activists helped achieve some landmark social and economic reforms during the 1930s. Helali makes the same point. And he acknowledges that the record of communism in the Soviet Union and China, while partly positive, contains much that is abhorrent. Mao Zedong's Cultural Revolution, which convulsed China in the 1960s and '70s and took millions of lives, amounted to an "unleashing of brutality against working people," Helali said. Joseph Stalin, the Soviet dictator responsible for millions of deaths from famine and political persecution, "made many mistakes," Helali further conceded.

When Vermont voters challenge him on crimes committed by communist regimes, Helali tells them "they should be skeptical of what's often propaganda," he said. Some academics, he added, have raised serious questions about the extent and circumstances of persecutions in Mao's China and Stalin's Soviet Union.

Overall, however, Helali says he gets a "warm and friendly" reception during his limited campaigning stints. "There's an especially positive response to my anti-war stand," he recounted. "People agree we should get out of Afghanistan, Syria and Iraq and spend here the money we're wasting there."

He also spins his support for free, universal health care and childcare as a patriotic proposition. "I say I'm simply endorsing family values. I use Republican rhetoric against the right wing."

It's Helali's way of suggesting that communism can be as American as apple pie.