An All-American 'Figaro' at the Hop 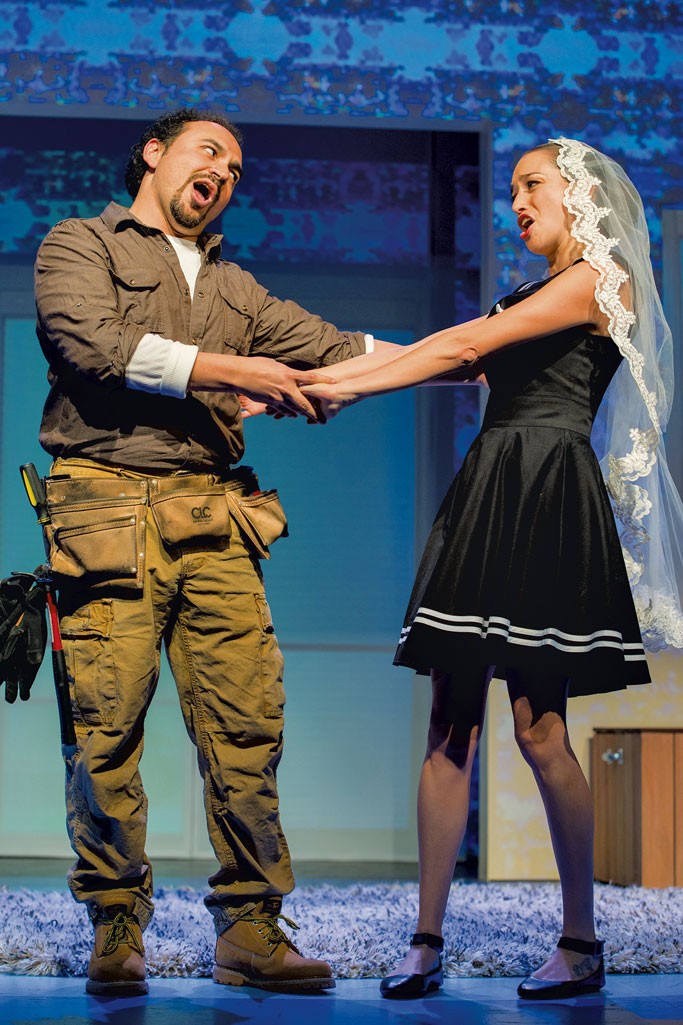 Shaking things up in the opera world generally means setting an old opera in a more recent era — as in the Metropolitan Opera's recent version of Rigoletto as a Las Vegas Rat Pack tragedy — or, perhaps, staging an operetta as musical theater, such as the Met's recent The Merry Widow.

As operatic possibilities go, though, those barely move the furniture around, compared with the rug yanking that is ¡Figaro! (90210). This trendy, contemporary adaptation of Mozart's The Marriage of Figaro, coming to Dartmouth College's Hopkins Center for the Arts next week, recasts the barber Figaro and his fiancée, Susanna, as undocumented Mexicans working as handyman and maid in a Beverly Hills mansion. Their employers — Paul Conti, a real-estate mogul, and Roxanne, a former Hollywood star — stand in for the original count and countess. Everyone sings in English, though Susana (as it's spelled here) is a little unsure in her adopted tongue and occasionally resorts to Spanish.

Musical-theater and drama writer Vid Guerrerio didn't just change the plot and rename the characters; he wrote his own libretto to Mozart's music, packing it with clever rhymes and contemporary slang. He remade Cherubino, a trousers role usually sung by a mezzo soprano, as L'il B-Man, an aspiring young male hip-hop artist who sings "Girl, You So Money" to the tune of "Voi che sapete." Instead of Mozart's letter-writing scene between Susanna and the countess, Guerrerio has Susana and Roxanne conspire in a "sexting" scene, with Roxanne sending Paul cleavage shots on Susana's phone. "Men can be dumb when it comes to love; all they need is a little shove," the women sing in duet.

Guerrerio's version of the opera is condensed; he shrank the work from four acts to two, so it lasts about as long as a lengthy feature film — two and a half hours — instead of the typical three and a half or more.

The writer accomplished that by cutting some of the score, which may rattle Mozart devotees. But, given Guerrerio's background, his adaptation might also be considered an homage to Mozart's music. The St. Louis native says he grew up attending the Opera Theatre of Saint Louis, which still performs operas only in English.

"So I had no notion of opera as elitist or foreign," explains the 40-year-old, speaking from his home in Los Angeles, where he works as a film-marketing consultant. "There was no distinction between operas and musicals." Guerrerio majored in music at Dartmouth and earned a graduate degree in writing for musical theater at New York University's Tisch School of the Arts.

Asked what he thinks of traditional opera productions such as a Madama Butterfly, in which a white lead soprano is made up to look Asian, Guerrerio says with a chuckle, "There's a reason I'm not in the real opera world. At some point, [traditional opera] needs to confront its colonial legacy."

Meanwhile, he intends ¡Figaro! to forward his own "vision of opera as truly contemporary popular entertainment." So far, Guerrerio seems to have succeeded in that aim: A 2013 concert staging of the work in New York City and a fully staged production by LA Opera's Off Grand initiative this past January both sold out every performance. LA audiences, Guerrerio recalls, ranged from older opera lovers on the first night to "a much more diverse crowd in their mid-thirties" at a final, added performance.

The director of both those productions, Melissa Crespo, will also direct the Hop's — a semi-staged concert performance for which she is creating the projections. Musical director Louis Burkot, Dartmouth's Glee Club director and the artistic director of Opera North in Lebanon, N.H., will assist. A cast of professional singers and Dartmouth faculty, alums and students will be accompanied by six musicians, including Burkot on a synthesizer imitating a guitar during recitatives.

New York-based Crespo, 31, has directed many plays, but Figaro is her first operatic work. Guerrerio wanted it that way, she says. "He liked that I didn't know opera, because I didn't hold to any conservative standard," Crespo explains. "He said, 'Now, don't you go studying opera and learning all about it. Stay as you are.'"

Crespo did finally see the original Figaro last fall at the Met. She enjoyed hearing a full orchestra play Mozart's music but found the story "a little boring," she says. "This adaptation has higher stakes. It's life and death" — Paul hints that if Susana sleeps with him, he'll prevent her deportation — "and it's more political. It's about race, gender, politics, class.

"And," Crespo adds, "it's so much funnier." At one LA show, she caught the cellist cracking up in mid-performance.

The work is even winning over opera buffs like Dartmouth senior music lecturer Erma Mellinger, who will sing Roxanne. Mellinger, who calls herself a "Mozart purist," has sung Cherubino several times, as well as major characters in Mozart's Don Giovanni and Così fan tutte, and she has shared the stage with opera greats Sherrill Milnes and James Morris.

"I was a little skeptical at first," Mellinger admits. "Then I got the score, and it's hysterical. Opera is a current, vital art form, and we just have to get it to younger people so they can see the value of it. I'm sold."

Guerrerio plans to adapt Mozart's other two collaborations with librettist Lorenzo Da Ponte — Giovanni and Così — in similar fashion, thus creating "a trilogy about life in contemporary America," he says. "Opera should reflect life as it's actually lived," he adds, "and not some fantasy from the past."

The original print version of this article was headlined "With a Multicultural Cast, This Figaro Is All-American"