Amozen, A Moment of Zen 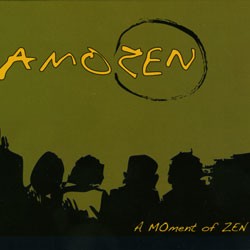 Loath as fans are to admit it, jam has lost its way. Once flush with bright, eclectic talent, the scene has collapsed under its own weight, its denizens fading as indie- and post-rock hordes gather strength. With Phish reuniting in March, local hopes linger. But the genre’s B-listers still circle a black hole, and nascent acts such as Amozen won’t be granted the same latitude as were their predecessors.

The Swanton four are, indeed, impassioned, as the liner notes of their debut, A Moment of Zen, suggest. And that’s part of the problem. Amozen’s earnest pleadings — what does it all mean? — are vaguely adolescent, like the sentimental waxing of some dorm-room poet whose ponytail you desperately want to snip off.

Zen opens auspiciously with “Intro,” a ringing duel between guitarists Blaine LaChance and Iain White. The tease promises prog but fizzles inexplicably. Instead, listeners are slow-dipped in a tepid title track that flails under LaChance’s off-pitch vocals. This same upstroke-reggae vibe holds sway through much of the self-produced album, betraying Amozen’s mandate — presumably, to jam. Not until the playful “New Year’s Eve” is there any jump in the mix. Sprinkled with hooks and dexterous runs, it’s an easy favorite.

Then, like a sonic right cross, the honky-tonk “Wheels of Emotion” comes out swinging harder than Jimmy Buffett on Red Bull. “Big” Matty Pendris trades bass for harmonica, and guest pianist Armand Messier bangs the ivories with abandon. It’s a raucous boogie, buoyed by Matt Dulude’s splashy percussion. At 7-and-a-half minutes, it’s also unabridged and screaming for a producer’s polish.

With their Rasta beats on ice, Amozen show real muscle. “Build a Wall” is a dirty composition that leans hard on progressive blues à la Jethro Tull. Buzzing with psychedelic ’60s echo, the band snakes through six minutes of edgy rock that’s as dark as it gets — for hippies, that is.

White is clearly the nerve stem here, flexing an ambitious guitar attack that should be fun to watch live. His leads on “Terminal,” a spirited acoustic number, and the soulful “Welcome Home” are standouts among a sea of tedious reggae. Zen’s tone shifts measurably during these detours, its soaring confidence evoking mid-’90s roadsters God Street Wine. With a little more swagger and some focus on harmonies, Amozen are sure to find a perch in Burlington. Here’s hoping their jams continue to ripen.