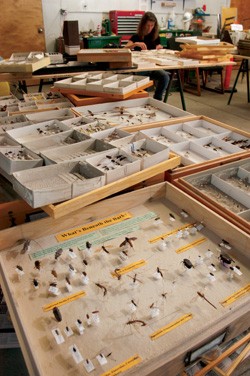 Two weeks ago, the Vermont Department of Health issued a press release that ominously announced, “West Nile virus has arrived in Vermont.” For the first time since 2003, two cases of the potentially deadly virus had been confirmed in humans — one an Addison County resident; the other someone from Franklin County who tested positive for the disease when he or she went to donate blood.

The health department noted that while most people infected with the mosquito-borne virus do not become ill, about 20 percent experience flu-like symptoms and less than 1 percent develop a more severe illness that attacks the nervous system.

“West Nile virus activity is being seen in most of the state,” the press release read, “and the activity is peaking now.”

There couldn’t have been a worse time for Tropical Storm Irene to shut down Vermont’s mosquito-testing program. Floodwaters at the state office complex in Waterbury inundated three state insect labs with more than three feet of silt-packed water. The Agency of Agriculture, Food and Markets lost its entire mosquito reference collection — amassed over a 35-year period — and the lab freezers that house specimens in need of testing. The DNA instrument that samples mosquitoes for West Nile remains in the flood-damaged building, on the second floor, and officials aren’t aware of its condition.

While the health department’s testing of humans and birds continues, mosquito testing is not being done, says state entomologist Jon Turmel. It could be several weeks before the program is up and running again, he says. Testing for eastern equine encephalitis, another mosquito-borne disease, has continued unabated.

Mosquitoes aren’t Vermont’s only insect casualties attributable to Irene. The flooding wiped out much of the state’s official insect reference collections — beetles, butterflies, moths, bumblebees, grasshoppers and other native and non-native species. Thousands of pinned specimens catalogued over five decades were covered in water and muck, leaving only thumbnail-sized “data labels” to explain when, where and by whom the insects were collected.

The agriculture lab was the hardest hit. Its three storage cabinets — each with 24 cases of pinned insect specimens — were completely submerged in floodwaters. Turmel says the lab lost its collection of “insects not known to occur in this country” as well as several collections used to help farmers and nursery workers identify invasive species and problem pests.

The floods took out only a few of the state’s mosquito surveillance traps, Turmel says, but with the lab’s “ultra-low” freezers knocked out, preserving the specimens to test for West Nile virus is temporarily impossible.

“We can trap all we want, but we have to put the specimens in minus 50 degrees or the virus breaks down,” he explains.

Down the hall from the agriculture lab, the Department of Environmental Conservation’s biomonitoring laboratory fared considerably better. The lab collects aquatic insects from Vermont’s rivers and streams to assess their ecological health. All identified insect specimens are stored in glass jars filled with alcohol and placed into an archive room, explains DEC environmental technician Heather Pembrook. Like its neighbors, the DEC lab took on three to four feet of water that upended specimen jars.

“Luckily, most of the specimens were retrieved and moved to a dry storage container just outside the lab building,” Pembrook says. “A few jars of specimens were broken and lost, which are irretrievable and can never be replaced.”

At the Department of Forest, Parks & Recreation, entomologist Trish Hanson has spent the past week doing triage on hundreds of bug specimens rescued from her lab two days after the storm. Part of Hanson’s job involves monitoring for destructive invasive species such as the emerald ash borer, an Asian beetle that has wreaked havoc on ash trees throughout the U.S. and Canada. Of the 84 insect cases in her lab, only 32 were completely untouched; Hanson estimates thousands of specimens were lost. In one beetle study alone, 22,000 were destroyed.

Last week, Hanson had spread out salvaged specimens to dry in a forest department maintenance garage in Essex Junction. Many of the pinned insects were virtually untouched — including Compton tortoiseshell butterflies and buprestidae beetles — while whole trays of moths were drowned in brown muck. Using a dry paintbrush, Hanson has begun the painstaking process of trying to clean and save the tiny data labels affixed to each specimen — now the only record left — so the information can be entered into a database.

Beyond the paper labels, none of the labs backed up their specimen data, an all-too-common practice, according to Kent McFarland, a conservation biologist at the Vermont Center for Ecostudies in Norwich.

Several years ago, McFarland began working on a project called the Vermont Invertebrate Database Alliance that seeks to bring together all of the state’s insect collections into one database that would protect them. He had secured some funding to digitally photograph the specimens to create a permanent, publicly accessible record.

“Unfortunately, we weren’t fast enough,” McFarland says. “We thought about, maybe there would be a fire. We weren’t thinking about a tropical storm.”

Jon Turmel wasn’t predicting epic floods, either. In the four decades he has worked for the state, he says he’s never seen anything like the torrents unleashed by Irene. In the immediate days after the floods, Turmel says he contemplated retirement, but now thinks he’ll keep working for a few years — to help rebuild the insect collection.