Amid the Pandemic, Lawmakers Debate a Return to Montpelier Next Year 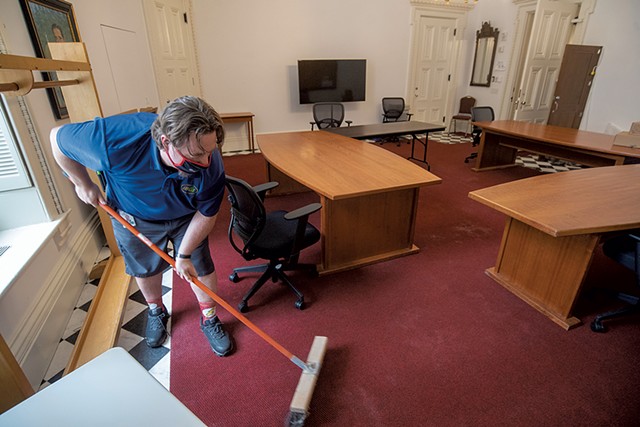 Vermont voters just sent 180 lawmakers to work on their behalf in the General Assembly. How many of them step foot in the Statehouse is anyone's guess.

The stubborn spread of COVID-19 in the state, the vulnerability of many older lawmakers, and lawmakers' ability to legislate from the comfort of their couches make a full return to Montpelier in January look less and less likely.

"If we can find a way to do it safely, and we all feel comfortable with it, then I would be open to returning to the Statehouse," said Sen. Ruth Hardy (D-Addison). "But I remain skeptical, knowing what I know about that building."

Most of the rooms in the 161-year-old granite edifice are cramped and poorly ventilated, making social distancing between lawmakers, staff, media and the public a tall order. A study performed over the summer by Burlington architecture firm Freeman French Freeman outlined the building's significant space limitations and suggested legislators explore new digs if they wanted to meet in person.

"I'm trying to get back to some normalcy while staying safeat the same time." Senate Minority Leader Joe Benning tweet this

Yet some lawmakers feel strongly that returning to Montpelier is both their duty and only fair, given state guidelines that have encouraged teachers and students to return to the classroom and businesses to reopen.

"I'm trying to get back to some normalcy while staying safe at the same time," Senate Minority Leader Joe Benning (R-Caledonia) told colleagues during a virtual Rules Committee meeting late last month.

Lawmakers won't officially convene the two-year session until January 6, but decisions about where and how to meet are being made now. Legislative committees will ramp up debate this week about whether to return to the Statehouse in person, continue working remotely over Zoom or use a hybrid arrangement of both.

Statehouse staff are already rearranging rooms, updating the building's IT capabilities and even ordering plexiglass barriers to shield lawmakers from the public, and one another, should they return.

The issues legislative leaders are grappling with are numerous, highly personal and politically charged.

"Some of them are saying, 'Look, between my kids remote learning two days a week and [COVID-19] cases on the rise, I'm not driving to Montpelier — I'm sticking with Zoom,'" House Speaker Mitzi Johnson (D-South Hero) said last week. "I have others who are saying, 'Our democracy is really hobbled. We have to all get back. If the school kids are doing it, we should be doing it.'"

The Vermont Constitution requires that lawmakers meet in person at least once for housekeeping matters at the beginning of the session, according to Senate secretary and resident parliamentarian John Bloomer. The remote voting rules that the Senate and the House passed in March applied only to the last legislative session, so they must meet in person to approve such rules again.

A quorum of each chamber — 16 of the 30 senators, and 75 of the 150 representatives — will be required to take up several orders of business. Each chamber must elect a secretary and leaders: a speaker of the House and a president pro tempore for the Senate.

The Senate also must appoint a member to join the lieutenant governor and the pro tem on the three-person Committee on Committees. The powerful but little-known panel issues committee assignments, thereby allowing members to begin work on legislation. Last session, Sen. Dick Mazza (D-Grand Isle) served as the third member.

Lawmakers must also hold a joint meeting of both chambers to sign off on November's election results. That meeting typically takes place the day after the first January session and requires the 180 members of the House and Senate to congregate. Precisely how that will take place remains unclear, Bloomer said.

In the unlikely event that a top vote-getter in races for governor, lieutenant governor or treasurer doesn't receive at least 50 percent of the vote, he explained, lawmakers must quickly vote on who should serve. In such cases, Bloomer noted, the state Constitution requires that lawmakers pick the winner of those offices by "a joint ballot" — which, to him, means using a paper ballot system.

On that same day, the newly elected governor would typically deliver an inaugural address to the joint session, but there is no indication that it has to be done in person, Bloomer said.

To Johnson, the only option is to have the 150 House members meet in some fashion on January 6 in the Barre Auditorium, one of the largest indoor arenas in Vermont. "From my perspective, there is no other place for us to be," Johnson said.

The facility can accommodate 238 socially distanced people on its main floor and another 112 in the basement. That's enough to fit all 150 lawmakers (or 180, were the Senate included) for that first day or two of the session, but it wouldn't work long-term, Johnson said.

"We're not going to rent out the Barre Auditorium every single day the House has to meet," Johnson said. "That would be expensive and a logistical nightmare."

Johnson wants the House to convene in person at least once, in part because there will be two dozen or so new representatives who deserve the chance to be sworn in for the first time in front of their colleagues. Lawmakers who can't or don't feel comfortable attending should have the ability to participate remotely, she said.

As for public participation, opinions vary regarding whether it's enhanced or hindered when the legislature meets remotely, given that the body streams its sessions over the internet.

Benning said his constituents are "naturally suspicious" about all that might be going on behind the scenes without in-person meetings. "If I've heard anything this campaign season, it's that people feel like there's shenanigans going on behind closed doors," he said.

Sen. Becca Balint (D-Windham), who is widely expected to be elected the next Senate president pro tempore, said she feels the opposite is true. "I've heard from so many constituents that they love they can watch everything on YouTube," Balint said.

Significant questions remain about air circulation and filtration in the building, which the Freeman French Freeman study did not address. Balint said she plans to ask for additional analysis.

The lawmakers' decision will also affect the Montpelier economy. Now that the leaf peepers are gone, the streets of the state capital are pretty quiet and businesses are suffering, said Lilli Cain, CFO and manager of the Capital Plaza Hotel, a block from the Statehouse.

Legislators are an important economic driver for the city, and their return "would bring some vibrancy back" to the downtown restaurants and bar scene, said Cain, whose hotel has a steakhouse popular with some pols, lobbyists and groups that book meeting rooms.

Businesses such as hers have had to adopt numerous safety measures — requiring that staff and guests wear masks, and cleaners scrupulously wipe down surfaces — to stay in business. She thinks lawmakers could do the same.

"We're following their guidelines," Cain said. "They should show the people who are showing up at their workplaces now that the state is able to do it responsibly, as well."

Administration officials announced last week that most state employees who have been working remotely should expect to do so through March 31, 2021 — extending the date from the end of 2020.

As a separate branch of government, however, the legislature makes decisions independently, Bloomer stressed. "I don't think the governor can restrict where you meet, when you meet and how you meet," he told senators during the recent Rules Committee meeting.

Benning suggested that the legislature's independence even extends to whether lawmakers follow the governor's health and safety orders. If the six-foot social-distancing guidance that Gov. Phil Scott has urged hinders the legislature's ability to meet in the Statehouse, they could use their own judgment, Benning said.

"Six feet or five feet, I'm not sure how much difference that would make," Benning said. "I'm very tempted to say we should proceed as we normally do."

Benning said his wife, Deb, is a public elementary school teacher who has been required to return to the classroom. If she can do it safely, Benning said, legislators should be able to, as well.

"We expect her to be in a classroom full of kids, and those kids come from all different walks of life. Their families travel. But they've carried on," Benning said.

That wasn't terribly reassuring to some of Benning's colleagues, including Sen. Mark MacDonald (D-Orange). He noted that public health guidance in many cases encourages people to be exceedingly careful about interactions, even with other family members.

"The Senate is probably just a big family," MacDonald said.

He noted that many lawmakers share apartments in Montpelier with other members — and then drive home on weekends to communities around the state.

Senate President Pro Tempore Tim Ashe (D/P-Chittenden) lost his bid for lieutenant governor and won't be back in Montpelier next year. But he's heard from some lawmakers that landlords are pressuring them to sign leases for the session. Legislative leaders, Ashe said, will need to give their members guidance on that front soon.

Other lawmakers have expressed significant anxiety about remaining remote indefinitely. Returning to some semblance of normal may very well "reverse that malaise people feel," Ashe said. But even the best laid plans wouldn't create the certitude people crave.

The recent outbreak associated with hockey leagues at the Central Vermont Memorial Civic Center in Montpelier showed how quickly infection rates can spike to levels that would trigger travel restrictions if they were occurring in other states.

"We could have a great safety plan in place at the Statehouse, and then if there's a major outbreak in late December, I don't think anyone is coming back," Ashe said.