That was before the coronavirus crisis hit. Now Nanton works from home and spends most of her days helping people file for unemployment benefits. But on one call three weeks ago, a Burlington woman told Nanton that her daughter had just fled an abusive relationship in California and needed diapers for her 1-week-old baby. At the end of the workday, Nanton drove to a Hannaford supermarket, bought some Huggies and groceries, and delivered them to the caller's Pine Street apartment. It was Nanton's first time buying diapers, on the job or off.

"It's been an enormous privilege to provide some measure of support to folks through these tumultuous times," she said. "To me, this is just a little itsy-bitsy something I could do."

With day-to-day government operations interrupted by the pandemic, the City of Burlington is facing a conundrum about what to do with its 700-person workforce. Some employees may be furloughed or even laid off as the mayor writes next year's budget, which has been wrecked by the economic slowdown.

In the meantime, the city has placed 45 employees with little to do — including school crossing guards, parking enforcement officers, and some parks and recreation staff — on paid leave. About 50 others have been reassigned to other city jobs .

City planners, for example, are researching how to set up quarantine sites for coronavirus patients. Burlington City Arts employees are coordinating a face-mask-making initiative. CEDO workers are helping small-business owners apply for loans.

Most, including Nanton, are working for the city's new COVID-19 Resource and Recovery Center, where their job is to help Burlingtonians find information about free meals and childcare, to answer questions about evictions and deferred tax payments, and to address other pandemic-related needs that emerge.

Mayor Miro Weinberger says the employee shuffle shifts city resources from places where they're not currently needed to where they are.

"I think it's going to be a long emergency," he said. "There really are scenarios where the safety net breaks down and the city has to step in."

Weinberger announced the creation of the recovery center on March 23, the day before Gov. Phil Scott issued his "Stay Home, Stay Safe" order. It is led by CEDO Director Luke McGowan and staffed primarily by CEDO employees, but it also borrows from seven other city departments.

The recovery center isn't a "center" at all. The 39 city employees assigned there work from their homes and communicate frequently by email, phone and, of course, Zoom.

"The way people are working has changed almost for everybody," McGowan said. "This is very new for a lot of city employees."

That's an understatement for Zach Williamson, the festival and event director at Burlington City Arts. This time of year, Williamson is typically planning a summer concert series and street performances for the Festival of Fools on the Church Street Marketplace. Now, he's heading up the city's Community Mask Initiative, which distributes cloth face masks to Burlingtonians. When BCA Executive Director Doreen Kraft asked Williamson to help, he didn't hesitate to say yes.

"If you think of this as an event, I have some logistics skills and planning and managerial skills that I thought would be useful," he said. "I certainly didn't know exactly what I was getting into." 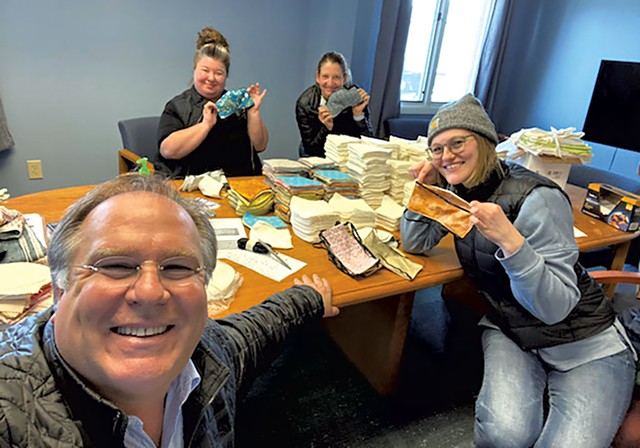 The mask initiative has taken off: More than 150 sewers from the Lyric Theatre, Vermont Teddy Bear and the Milton Artists' Guild have crafted 11,000 facial coverings to date. Nearly 40 percent of some 760 calls to the recovery center have been requests for masks or offers to make them.

Williamson and his team also sought out people and places that might need the coverings. He said they used Seven Days' Vermont Eldercare Navigator, a database of the state's senior living facilities, and the newspaper's Good To-Go Vermont website, which lists restaurants offering food takeout and delivery, to make a list of essential workers who may need masks. Williamson also cold-called convenience stores to make sure those workers were covered, too.

"They're like, 'Really? It doesn't cost money?'" Williamson said of the workers' typical reaction. "There's a lot of surprise just that you're calling and offering and that it's a service we're providing. It shows we ultimately just want everyone to be healthy and get through this."

Once the masks are made, they're professionally cleaned and then distributed by Burlington International Airport staff and Burlington police officers.

Rachel Jolly, who runs CEDO's Community Justice Center, also has a completely different gig during the crisis. In normal times, her outfit operates programs focused on crime and conflict — court diversion, victims' services and others. Now, as operations director for the recovery center, Jolly starts every morning by setting up a standing desk at her family's dining room table and logging on to SeeClickFix.

The web app is typically used to catalog citizen-reported zoning violations and graffiti, but during the pandemic the city retooled the program to assign job tickets to coronavirus-related calls. Jolly, who once used the app to report illegal dumping in her neighborhood, analyzes the tickets to determine what Burlingtonians need and how the recovery center can respond during the crisis. Most calls — whether they're about food assistance or unemployment benefits or offers to volunteer — are addressed within 24 hours, she said.

"I've never done emergency management in any way," Jolly said. "That was what was hard in the first few weeks, for sure: Reading these individual tickets that are coming through, there's a lot of pain and suffering right now, and a lot of anxiety." 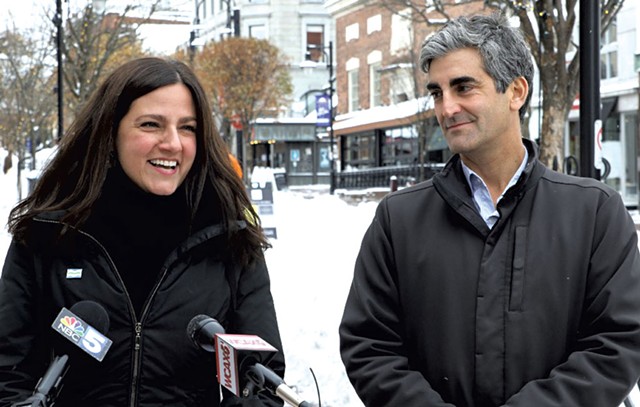 Among the anxious are small-business owners, who have been hit particularly hard by the governor's stay-at-home order. Church Street Marketplace Executive Director Kara Alnasrawi had only been on the job for four months — and was in the midst of planning a maple festival to boost traffic during the winter doldrums — when Weinberger asked her to take on a new role.

At the recovery center, Alnasrawi is tasked with helping all Burlington businesses survive, not just those on the city's downtown pedestrian mall. Instead of planning the now-postponed Burlington Discover Jazz Festival, she's been organizing webinars, helping merchants advertise curbside or delivery services, and assisting businesses cut through the red tape of the federal Paycheck Protection Program. So far, 67 businesses have contacted the recovery center.

Related Burlington Discover Jazz Festival 'Will Not Happen as Planned'

"No one is doing the same amount of business they were doing before," Alnasrawi said. "And that's obviously the main concern: how to stay afloat long enough until the doors can be reopened."

Weinberger thinks the recovery center might be needed for a year or longer. Last week, he requested some of the state's $1.25 billion in federal relief funds to help sustain it.

"Even if it costs $1 million to run this for a year, I think that would be money well spent if it's providing real help to people in need," Weinberger said. "So far, I think that's what it's been doing."

The mayor may be faced with some hard decisions the longer the crisis continues. At a Zoom meeting on Monday, Weinberger told the city council that Burlington could lose up to $15 million in revenue between now and June 30, 2021. There are only a few ways to fill the gap, the mayor said: borrowing money, spending down reserve funds, securing federal cash or cutting costs.

And because employee salaries and benefits account for 60 percent of the city's $79 million general fund budget, "the great majority" of cuts could be labor-related, Weinberger told Seven Days in an earlier interview. The mayor had pledged not to lay off any city workers in the early days of the crisis, but the looming budget shortfall has forced him to reconsider. Weinberger and the council went into a closed-door meeting to discuss the issue.

"We have no choice but to consider significant cuts," Weinberger said, adding: "It's impossible to be confronting an economic impact of this magnitude [without] discussing what the options are."

The prospect of losing government employees — especially when so many of them have taken on new roles literally overnight — weighs heavily on Weinberger. He praised the parks employees who helped turn the North Beach Campground into a low-barrier shelter for homeless folks and the staff who cooked up online programs once the Fletcher Free Library's doors closed. And he gave a nod to Nanton, the CEDO worker who delivered diapers to a mom in need.

"I've been issuing a lot of directives asking people to do a lot of challenging things," Weinberger said. "It's a time when government matters more than ever, and I think the team has been rising to that challenge."