Amid a Rise in 'High-Risk Conflicts' With Black Bears, Officials Urge Vermonters to Take Precautions 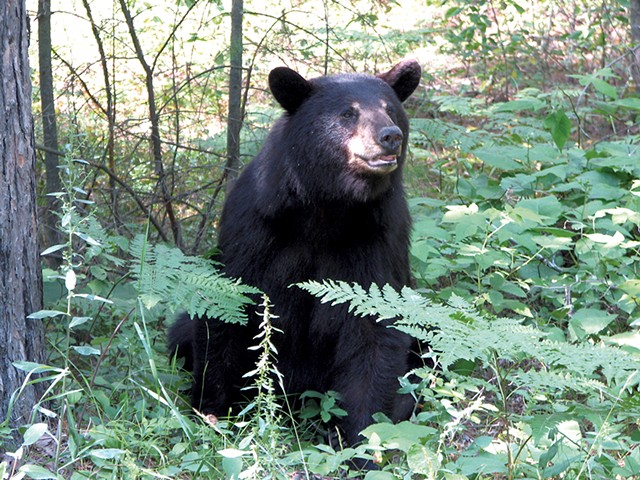 One evening earlier this summer, Carin Roberts and her husband, Jack, were sipping beers on the porch of their North Ferrisburgh home. As they sat unwinding to the sound of chirping crickets in rural Addison County, something startled their dog, Pretzel. The "all-American mutt," as Carin described her, bounded off the porch and around the back of the house, barking wildly.

Pretzel is a "pretty nervous" dog, according to Carin, so the Robertses didn't think much of her agitation as Jack followed her to the backyard. But then, Carin recalled, "All of a sudden, I heard a yelp, and my husband yelled, 'It's a bear!'"

In fact, it was five bears — a mother black bear and her four cubs — whose regular sightings around Ferrisburgh this year have made them local celebrities and an almost daily staple of the area's Front Porch Forum postings.

Jack collected Pretzel in a flash and put her safely inside the house, from which he and Carin watched in fascination as the bears sat eating honeysuckle. Or, as Carin put it, "They were just sitting in the backyard bein' bears."

After a bear encounter the previous summer, the couple thought they'd already "learned their lesson," Carin said. They'd cleared the outside of their home of trash cans, bird feeders and other items that could tempt bears. This summer, assuming the bears would move on when they realized there was no human food to be had, the Robertses were content to let them be.

Pretzel, however, was not. She pinballed from window to window, barking, until the frightened cubs climbed a tree by the front porch. Then Mama Bear lumbered onto the porch.

"That's when we knew we had to do something," Carin recalled.

The Robertses' bear experience — don't worry, it ends well — was one of hundreds of human encounters with black bears recorded in the state this year. In July, the Vermont Fish & Wildlife Department reported that "high-risk bear conflicts," which have been on the rise for a decade, have dramatically spiked in 2022. As a result, the department is urging Vermonters to take more proactive steps to coexist with their burly neighbors.

"What's driving a lot of this is a learned changed behavior in our bear population." Jaclyn Comeau tweet this

In 2021, about 600 bear encounters were reported to the department. Already this year, Fish & Wildlife has received more than 800 reports from all over the state. Another 250 sightings have been reported to local game wardens.

According to Front Porch Forum chief of staff Jason Van Driesche, more than 600 posts in the Vermont-based online neighborhood message board's "wildlife" category have mentioned bears this year, compared with about 370 in the same time frame last year.

And not all encounters are reported. "We know this is only a fraction of the problems going on out there," said Jaclyn Comeau, a wildlife biologist and leader of the Black Bear Project at Fish & Wildlife.

That's not to suggest that Vermont has suddenly become a landlocked version of Amity Island from Jaws, where people should stay out of the woods for fear of being mauled.

Comeau said black bears are "extremely risk averse," looking to avoid conflict whenever possible. Since 1943, she noted, Vermont has had only three reported bear attacks, defined as encounters in which a bear makes physical contact with a human that causes injury — or, as in that 1943 case, death.

The other two cases were in 2011 and 2018. Both resulted from people intentionally feeding bears. And, in both instances, the humans involved escaped with only minor injuries — and, presumably, Darwin Awards.

"Considering all of the relatively close encounters between people and bears in Vermont, I believe this highlights how tolerant bears are of people," Comeau said. But, she added, the encounters underline that "there is a risk when attracting bears to human spaces."

The gravest risk in those instances is usually not to the humans but to the bears. 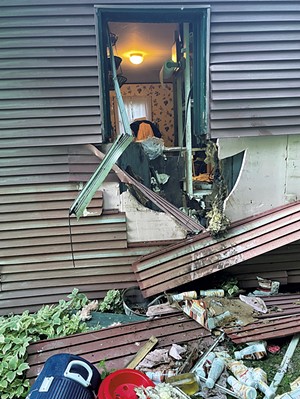 So far this year, 13 bears have been killed for "high-risk" behaviors, such as breaking into homes or killing livestock, by Vermont game wardens or citizens authorized by wardens to do so. Comeau believes that number is also an undercount. "In years of really high reports of conflicts ... we do see spikes in the number of bears killed directly" by civilians in high-risk conflicts, she said.

She added that bears foraging in backyards are usually also crossing roadways and that periods of high bear sightings tend to bring accompanying spikes in the number of bears killed by vehicles.

What's driving the increase in bear encounters? Comeau suggested a confluence of factors.

One is Vermont's robust black bear population — around 6,000, according to 2021 estimates — which is among the densest in the country. When you have a lot of bears in a relatively small area, Comeau pointed out, they're bound to become more visible.

Another potential factor is that bears' natural supply of food is dwindling, whether through development or other factors. The dearth drives them to seek alternatives such as backyard bird feeders, berry bushes or that most prized bear delicacy: your smelly trash.

"If natural food is plentiful, bears are going to choose that over human foods," Comeau said. But she added that bears are "really flexible omnivores," looking to maximize their caloric intake. They are also, she noted with admiration, capable of learning.

"We think what's driving a lot of this is a learned changed behavior in our bear population," Comeau said. "They're amazingly adaptable. And they're figuring out that coming into our backyards, into our communities, they can reliably find high-calorie foods, like birdseed and garbage. Until that changes, they're going to keep coming back."

She advises taking down bird feeders from early spring until winter, calling them "one of the biggest driving factors that bring bears into communities," given that bears' diet consists mostly of nuts and seeds in the wild.

"That's honestly the easiest problem to solve," she said.

Comeau also suggests keeping trash and compost locked in a garage, basement or other sturdy structure. If that's not an option, she recommends looking into bear-proof containers or keeping a rag soaked in ammonia — a bear irritant — in or near the garbage can.

Your local garbage haulers willappreciate those efforts. Wade Acker of Acker Waste Management in Bristol said his drivers have been cleaning up after bears along their routes all spring and summer.

"Every day, we're picking up knocked-over cans," Acker said. "One of my drivers called me at 5:45 the other morning to tell me they were following a bear up the road with a trash bag in its mouth."

One hopes those drivers kept their distance. Comeau explained that the most important thing to do when you cross paths with a black bear — whether you're hiking, biking or strolling in the neighborhood — is to keep a safe distance and alert the bear to your presence.

"If the bear is way off ... and doesn't see you, just enjoy watching the bear and that cool opportunity to get to see a bear," she said. If it's closer, "calmly call out to the bear, like, 'Hey, bear!' And maybe move your arms around."

There's no need to be aggressive or threatening, she added: "You're just letting them know you're there."

What if you encounter a black bear at home? Comeau advised doing "everything you can to make that bear feel uncomfortable." Ideally from the safety of your home, make as much noise as possible — yell, bang pots and pans, even set off your car alarm.

"Most bears who don't have a lot of experience around people are going to take off when they hear that," Comeau explained. Bears that are more acclimated to people, such as the mama and her cubs in North Ferrisburgh, may need a bit more encouragement.

When the mama bear climbed onto the Robertses' porch as her cubs perched in the tree, Jack took more aggressive measures. He leaned out of the windows blasting an air horn; he tossed firecrackers. About two hours after the encounter began, the bears finally moved along. They haven't been back, probably because the property offers no food source.

"They're adorable, right? Baby bears are the cutest," Carin said, adding that she enjoyed their brief visit. "But also, Mama will rip your face off."