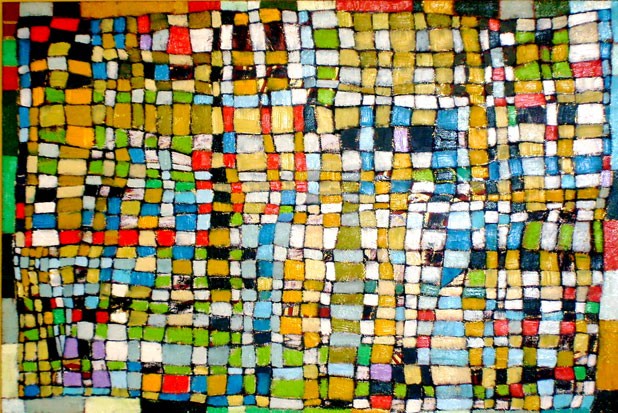 The main difference between 21st-century pop-culture art and that of the 1960s may be intent. “Measuring & Collecting,” a current exhibit at Burlington’s Select Design, features 12 painters who might be considered 21st-century pop artists. While their predecessors wryly commented on the look of American culture, these current artists are shaping that culture from the inside — directly, from the worlds of graffiti and skate- and snowboarding, rather than from Madison Avenue.

The most successful contemporary pop artists, including some of those in this exhibition, are also astute businesspeople. “Measuring & Collecting” features several artist/designers whose images have appeared on prominent clothing labels and CD covers, as well as in major museums and galleries. The selection was curated by Michael Montanaro, who owns a gallery in Newport, R.I., and represents the artists on view.

The most notorious “imagesmith” in the show is Shepard Fairey. He’s the creator of the controversial 2008 “Hope” poster picturing Barack Obama, and his earlier “Obey Giant” wheat-paste icon is nearly as famous. His recent “Defeat the World” poster, used by Comedy Central’s Stephen Colbert at the Winter Games, may well become so.

An “Obey Giant” print appears in the Burlington show, as does Fairey’s “Peace Fingers,” printed on metal. The artist’s works are controversial because of a penchant for plagiarism, exemplified by his Obama print. But his appropriation of images from earlier designers is so common in this context that it might be considered part of his anarchistic, graffitist approach.

Jesse Reno from Portland, Ore., has also had serious success as a nonmainstream illustrator. His 4-by-4-foot diptych “Follow Your Vision Changing Shape Not Direction” is a thickly layered figurative abstraction featuring one of his trademark mystical, yet grotesque, characters. Reno is more than a designer; his surfaces are complex acrylic and mixed-media statements that take lines and shapes into unexpected realms. There’s a suggestion of aboriginal art in these paintings, and Reno’s figuration seems believably personal in a way that much of the rest of the exhibition does not.

Another West Coast artist, Randy Noborikawa, displays a group of 13 small vacuum-tube sculptures from his “El Sugar Skull” series. In one, a tall vacuum tube is flanked by smaller tubes on either side, like three crosses on Golgotha. Noborikawa painted tiny patterns and skulls on the fetishistic objects, but such details aren’t really necessary. The forms are engaging enough without the predictable pop idioms decorating them.

The two Burlingtonians in the show, Clark Derbes and Mikey Welsh, have been placing their work far beyond the Queen City for quite some time. And both are producing their most formally original and mature creations to date. Derbes and Welsh are the only two nonfigurative painters in this show.

Welsh gained considerable acclaim with the toothy, faux-art-brut figures he produced for several years. Their virtue was the way they were painted, rather than their subject matter. Welsh has now dropped the figures and seems focused on the energy and sophisticated color harmonies that were always his strong suit. The untitled, multipaneled pieces at Select Design are structurally solid, consisting of raw, flatly painted passages of color. His “Untitled Quadtych” contains bravura violet, blue and black brushstrokes over four vertical 11-by-36-inch panels. It has the grace of Asian calligraphy and the strength of Jackson Pollock. In other pieces, Welsh works with broader arrays of hue, yet keeps his picture plane shallow. That technique is a continuation of the spatial approach that gave his earlier figurative works such vitality.

Derbes seems more painterly than ever. His “Quilt Weave” series is somewhat reminiscent of Paul Klee’s use of tile-like squares of color, but each of Derbes’ squares could practically stand on its own. His largest painting here is the 24-by-36-inch “Quilt Weave #5,” which has a matrix of small, uneven squares layered over a foundation of larger ones. Thin black outlines animate each of the squares, and tonal variations punctuate Derbes’ blankets of color.

It’s hard to know what’s contrived and what’s genuinely personal in much of the art of “Measuring & Collecting.” But maybe it doesn’t matter. When an artist’s main goal is to have an impact on popular culture — and acquire some of the financial success associated with it — being “personal” seems like an anachronism.