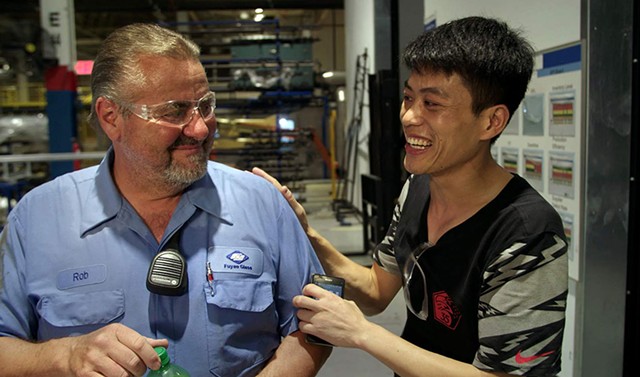 In 2014, China's Fuyao Glass opened a branch near Dayton, Ohio, in a former General Motors factory. The gigantic plant, where as many as 10,000 were once employed, had stood empty since the 2008 recession.

While politicians blustered about Chinese investment in the U.S., Fuyao quietly got under way. Chinese supervisors received tutorials in American culture. (Americans are chatty and not prone to abstract thinking, they were told.) Local workers expressed their gratitude for jobs, even as some noted they were making less than half their GM wages.

Five years later, is Fuyao a story of globalization's triumphs, or of its discontents? That depends on whom you ask, and for their absorbing documentary American Factory, just released on Netflix, directors Steven Bognar and Julia Reichert asked a wealth of people, from Fuyao's CEO down to the workers on the floor.

As a result, American Factory doesn't feel partisan, despite the backing of Barack and Michelle Obama's new production company. It's a deep dive into the differences between two cultures and how they manifest on the terrain of work, with no easy answers on offer.

Dayton locals Bognar and Reichert attained a degree of access that makes viewers feel like flies on the wall. We watch CEO Cho Tak Wong finesse his strategy for presenting the plant to the public; we visit management meetings; we attend a fiery union organizing session. We tag along on a visit to the main Fuyao plant in China, where workers do military-style drills and promote the company in slick musical numbers. We even listen in on a mandatory meeting where high-paid consultants try to persuade the Ohio workers not to unionize.

On the factory floor, the difference between Chinese and American workers appears stark: energy and tireless efficiency on the one hand, disorganization and dissent on the other. Americans insist on eight-hour shifts and weekends, the Chinese managers note with exasperation. Their "fat fingers" make them slower.

But the personal stories make it hard to see anyone as a national stereotype. We meet an engineer who misses his family in China and rhapsodizes over the de-stressing effects of his evening cigarette. We meet a supervisor who takes inspiration from the boot-camp drills at the Fujian plant and starts lining up his workers at home. We see cross-cultural friendships forming, people becoming less foreign to one another.

And, inevitably, by the end of the film, we see people being replaced by machines. When an Ohio worker evokes the American dream, the narrative turns elegiac. Older workers who remember their GM wages fear prosperity is gone for good. Younger ones who voted against the union simply fear losing their jobs. The Chinese have their own version of such regrets: Both the engineer and the CEO speak nostalgically of growing up in a poorer but less frantic world.

A recent Bloomberg story observes that American Factory has journalists and bloggers "buzzing" in China, though the film can't be legally streamed there. While state media have spun the doc as a paean to Chinese investment abroad, others haven't ignored its darker currents.

Bloomberg quotes a viewer named Zhang Ming who says the film evoked both admiration for Chinese efficiency and "empathy" for American workers: "The feeling is very complicated." Indeed it is, and that's why Americans should also be buzzing about American Factory. To see it is to ask ourselves tough questions about what we expect from work and life, and about where the quest for "efficiency" ends.

The original print version of this article was headlined "American Factory"