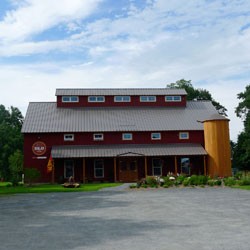 Vermont’s craft distilling wave seems to be headed exponentially upward. Yet another local vodka has debuted this summer, from a brand-new microdistillery that shares land with Harpoon Brewery in Windsor.

Owners Peter Jillson and Anne Marie Delaney opened American Crafted Spirits six weeks ago. Their first product, SILO Vodka, is now for sale there and in a handful of Vermont liquor stores, where it retails for $34.99 and sports a sketch of a grain silo on its bright-red label.

Jillson crafts the spirit on a custom-built German column still. “It’s like a musical instrument, and it sort of looks like one, too,” he says of the glimmering contraption, which visitors can gawk at from behind a glass wall in the tasting room. “If you work it the right way, with the right raw materials, it’s fun to sort of make it sing.”

For now, the raw material is organic grain from Windsor’s Great River Farm, which Jillson distills into a slightly sweet spirit that visitors can sample straight or in a daily cocktail — such as a watermelon martini — in the distillery’s tasting room.

Within two months, Jillson and Delaney hope to release a gin — and, down the road, a whiskey. “There’s quite a demand for whiskey right now, but we’re trying to stay conservative and grow organically,” Jillson says.

American Craft Spirits was funded in part by a roughly $100,000 loan from the Vermont Economic Development Authority, and it’s the latest food-related business to land in the Windsor Industrial Park on Route 5. Harpoon, Vermont Farmstead Cheese Company and the Sustainable Farmer — with a creemee stand and a wood-fired outdoor pizzeria — also operate in the complex, along with an outdoor tour company and a sculpture garden.