Ambitious Ideas Flow from a New Gallery in Stowe 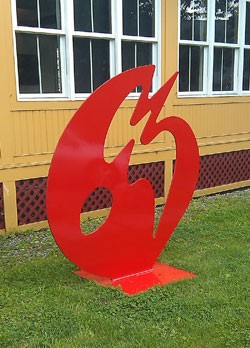 You’ve heard of the Fresh Air Fund, which enables urban kids to escape the city for a relatively rural vacay? Mia Feroleto has come up with a similar concept for artists. Not just to come to Vermont for the landscape, but to maybe paint it, or anything else. Feroleto, 54, owner of the new Green + Blue Gallery in Stowe — in the former location of the late Stephen Huneck’s gallery on the Mountain Road — envisions artists from elsewhere spending an art-making sojourn in Vermont at the home of an obliging patron, preferably, but not necessarily, in the Stowe area. “I’m in the process of working out the details now,” she says. “I’m writing a questionnaire for the families and the artists to cover things like smoking, allergies, the basic living situation, what would be off limits, what would be expected.”

In exchange for staying with a family, the artist would gift his or her hosts with a work of art. The only expense would be a “modest administrative fee for reproductions and paperwork,” says Feroleto. And during their visit the artists would create work that Feroleto would exhibit at her gallery before their departure. She’s thinking of staging a group show of all the participating artists, as well as creating social occasions for them to mingle with each other.

It’s an appealing idea, albeit in its infancy. Feroleto plans to begin advertising it this week on the website of the New York Foundation for the Arts — which she calls “perhaps the number one online resource for artists” — as well as sending word out to “ a large group of galleries I know.”

And Feroleto does know a lot of galleries. She curated dozens of shows and organized many events during her years living in Manhattan, and is the founder of Art Walk New York, an annual charity event for the city’s homeless. Though born in Burlington while her father attended the University of Vermont Medical School, Feroleto grew up in Connecticut. She graduated from the College of New Rochelle in fine arts and obtained a master’s in lithography at SUNY Albany. Despite these arty degrees, Feroleto worked as a hospital administrator in New York. Eventually, she realized her organizing skills could be applied to the arts.

And critters. A lifelong animal-rights activist, Feroleto recalls writing her first letter to the editor in the eighth grade. “I said people should not buy baby chicks and ducks for their children for Easter,” she says. “I’m a very big letter writer.” Recently that passion has been turned into a book project. With illustrator Erica Harris, Feroleto has the first of a planned series of children’s books, titled The Furry Feroletos, in process. The theme: real-life animal rescues.

Meanwhile, she’s beginning to promote an upcoming exhibit of drawings and sculpture by Rita Blitt at the Stowe gallery. And it’s not just the artist’s dynamic, abstract aesthetic that interests Feroleto. “She is a very interesting woman who is gifting an enormous body of work to museums, universities and not-for-profits to use in their fundraising work,” the gallerist explains. “I’m working with her foundation to achieve this goal.”

Feroleto notes that Blitt is currently also working on an installation piece for the Anne Frank Center USA in Manhattan, and has completed a short film (“Caught in Paint”) in collaboration with the Parsons Dance company and photographer Lois Greenfield. In it, Blitt paints in large gestures on transparent surfaces while the dancers mirror her movements on the other side. The film “has been shown at Cannes and at over 100 film festivals around the world,” Feroleto says. “I’m hoping Rita’s generosity will inspire other artists to do the same.”

A bright-red metal sculpture by Blitt already adorns the lawn at the Green + Blue Gallery — a name chosen simply because Vermont has so much, well, green and blue, Feroleto explains. Though she returned to Vermont four years ago, the gallery materialized just last month. So far, Feroleto is showing a variety of contemporary works by artists from around the world, a mix she expects to evolve over time. One thing’s certain: Feroleto is not lacking for ideas.