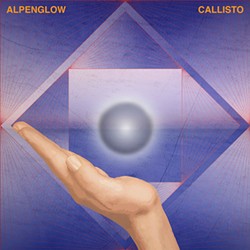 Middlebury-born Alpenglow relocated to Brooklyn more than a year ago. Since then, they've recruited a new producer, jumped onto a record label (conceptual artist Yoshi Ashi's Chizu Records) and released their first full-length album, Callisto. How does all this change translate to the music?

It's much the same, but also somehow different.

Not that anyone would immediately identify a "New York sound" on Callisto. But it's clear the former Vermonters have been influenced by a change of scenery. The band that made Chapel and Solitude in Vermont is still evident at the core of Callisto. But new energy is at play here.

That is due in part to the new atmosphere (the band's website notes that its members have always been influenced by their environment). It is due, as well, to the involvement of producer Sam Cohen, who also plays bass on the album. Cohen, known from Apollo Sunshine and Yellowbirds, injects the psychedelia of those bands into Alpenglow. The marriage feels so natural, it's as if the band always sounded like this.

The album's opener, "Dreaming Too Much," kicks off with ethereal guitars and vocal harmonies that play off each other. They blend seamlessly with a haunting synth pad — it's nearly impossible to tell where vocals end and synth begins.

Vermont fans of Alpenglow's previous offerings will find familiar the sound of Graeme Daubert's voice. He and bandmates Peter Coccoma, Elori Kramer and Kenneth Root are responsible for the album's vast sonic footprint. But Callisto doesn't take listeners too far too soon: The band reprises "Solitude" from its 2013 EP of the same name. This serves as a convenient A-to-B comparison to gauge the progression since their debut effort. It also serves as an ironic callback with the lyric, "If I wanted my solitude / I'd move to the city."

"Wishing Well" lulls the listener with sparse piano and guitar strums. That serenity is stripped away by a synth effect that recalls a 1950s sci-fi flick. That in turn clears the path for a Moog-esque synth, which splits the track apart as it draws to a close.

Next up, "Following the Scene" is one of the most impressive examples of the band's reinvigorated sound. Analog-era polysynth sounds sit comfortably beside guitar tremolos, while violin trills dance alongside a haunting, Theremin-like synth. A tightly interlocked bass and tom-driven drumbeat provide forward momentum.

Even with these journeys away from the "traditional" Alpenglow aesthetic, Callisto offers some familiar ground. Whether representing the isolation of Vermont hills or surrounded by the static of strangers in a city, Alpenglow bring a spirited sound to the solitude.

Callisto by Alpenglow is available at alpenglowband.bandcamp.com.