Side Dishes: Getting Fruit-Looped, Hawaii- Style 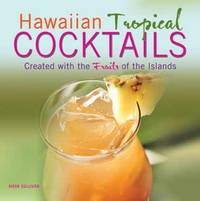 Pineapples, mangos and Kona coffee don't grow in Vermont, but a newly released, coffee-table-style book called Hawaiian Tropical Cocktails has a significant Vermont connection. The author, bartender Mark Sullivan, grew up in the Green Mountain State and is the brother of Dirty Blondes singer and Seven Days Art Director Diane Sullivan. A childhood friend, Dave K. McAteer of South Burlington, who works for Homeland Security, helped write "biographies of the fruits" that are included the book.

Before moving to Hawaii, Sullivan tended bar at Perry's Fish House and ESOX during a brief stint as a UVM medical student. When he gave that up, he decided he ought to live in a place with better weather. "I figured if I was going to tend bar for a living, it might as well be there," he explains.

Sullivan's first book, a colorful collection of recipes called Hawaii's Tropical Drinks and Gelatin Party Shots, came out last year. The new book, released this week, is filled with gorgeous pictures and labor-intensive recipes, all of which incorporate fruits that grow on the islands. For instance, you can make the "Hawaiian Hurricane," a blend of guava juice, rum, pineapple schnapps and juice, macadamia nut liqueur and grenadine. Or a "Lychee Fizz," which combines lychee, simple syrup, vodka, lemon juice and club soda. Feeling relaxed yet?

Sullivan's next venture? A book of Vermont-y drinks. On a recent trip home, he experimented with maple cocktails and a rhubarb martini, and he plans to return during the apple harvest to work on a few cider-based beverages. A nip of something to stave off the autumn chill . . .