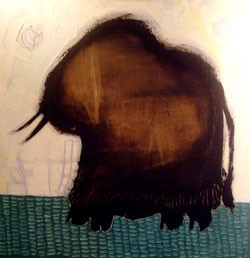 West Branch Gallery & Sculpture Park in Stowe is getting a jump on spring by featuring two painting exhibitions that are decidedly unwintry: bright and sunny oils by Aline Ordman and a herd of stylized animals, including some found in warmer climes, by Christopher Griffin. The two shows are different enough to stand on their own, yet their equally high caliber makes them nicely complementary.

Ordman’s half of the exhibit, titled “Suspended Moments,” brings together more than a dozen small-scale oils and a few strong figure drawings. The paintings are very formal: well composed, with highly controlled values and deliberate, strong brushwork. The 20-by-16-inch “Waiting for the Bus, Cambridge” is a typical street scene that marshals a group of standing figures doing just what the title says at a downtown bus shelter. Ordman’s figures are blurry, as if seen by someone nearsighted, but that lack of extraneous detail makes gestures and shadows more important and interesting.

In the oil painting “Riding,” a 9-by-12-inch equestrian-themed canvas, a horse and rider angle away from the viewer and are broken into patches of color. The background meadow and hills are also simplified, so that broad shapes induce the eye to focus on Ordman’s smaller strokes describing the rider.

If the paintings seem formal, the drawings are intriguingly spontaneous. “Nude Composition” is a 29-by-24-inch mixed-media drawing that breaks through the borders of the picture plane. Magenta pastel seems to fly off the right edge, and the muscles of the partially covered nude model appear tense. The gesture is ambiguous, the hues brilliantly layered.

Griffin is a Canadian artist who last presented a body of work at West Branch in the spring of 2008. His current collection is entitled “New Mythology.” Subjects range from a tiny lizard to a leviathan whale. Griffin’s technique of using an asphalt medium with oil is inventive, and his critters are creative and lively. Like nearly all of these paintings, the 18-by-14-inch “Fish Market Pelican” is monochromatic — in this case a pale raw umber, with wide and dark asphalt lines defining the form. Griffin also indulges in playful mark making; dashes and dots add visual rhythms to his works.

In “Isabela Iguana,” a small lizard transverses a white-on-white ground beneath a mass of sapphire-blue growth, delineated by broad, brown asphalt lines. Another brilliant blue piece conveying movement is the massive 72-by-112-inch “Sperm Whale.” Griffin painted it on three unevenly spaced panels with a high horizon line. The mighty cetacean beast seems to be crossing the blue-green underwater world by effortlessly floating alongside a shoal of fish. Fine lines, like scars from ancient battles, trace the whale’s expansive contours.

“City Bull” depicts a 26-by-25-inch Pleistocene-era animal, but this image represents a more modern kind of shamanism — reading the entrails of the stock market. Griffin’s artist statement reveals, “2009 has brought a new series … a bear or a bull is painted every day in response to the day’s activity on the stock market.” A group of 12-by-12-inch paintings dating to January and February 2009, of hulking bulls or grumbling bears, hangs in a grid of 12 images. The rich brown of Griffin’s asphalt medium is applied like stain painting and soaks into the canvas, contrasting with the impasto application of oil paint.

These colorful tandem exhibitions are worth a visit, especially while the earth outside is still frozen and covered with snow.