A preschooler blew bubbles while he and his mother waited for their order of smoothies and loaded nachos last Thursday at Sweet Alchemy Bakery and Café in Essex Junction. Pairs at other tables chatted quietly as they ate. They dug into brown rice harvest bowls blooming colorfully with purple cabbage, sweet potato, red pepper and stir-fried tempeh; and burritos stuffed with scrambled tofu, caramelized cabbage, kale and "cheesy" sauce. A glass case displayed an array of freshly baked treats: maple-glazed doughnuts; dense, moist pumpkin bread; and a luxuriously caramelized fig-and-rosemary upside-down cake. Each bore a label detailing its properties: vegan, gluten-free, soy-free and/or nut-free.

All the offerings at Sweet Alchemy are vegan (no meat, fish, dairy or eggs), and most are gluten-free, but that's not the only attraction of this newish business at the Barns at Lang Farm. Rachel Gray of Richmond, the preschooler's mom, said she comes to Sweet Alchemy simply because the food is really good.

"We love the nachos with the butternut squash 'cheese,'" Gray said of the bright mustard-colored, cashew-based "cheesy" sauce enriched with squash and miso, "but we also love regular cheese." Both she and her 3-and-a-half-year-old are big fans of the Green Monster smoothie made with pineapple, mango, coconut milk, mixed greens, local spirulina, ginger and lime. "I always know we'll get a good, healthy treat here," Gray said.

Sweet Alchemy's owner, Bhava Carr, is neither gluten-free nor vegan herself, but a series of twists and turns led her to focus on what she calls the "allergen-friendly market." It's been 18 months since Carr, 32, made the leap to her own brick-and-mortar location with a large commercial kitchen.

Chatting in the homey, light- and plant-filled café, she kept an eye on the room, jumping up at one point to deliver a take-out order to a waiting customer. "Food service is a service," Carr said as she described the winding path that led to her small café and expanded wholesale business, originally named Four Sisters Bakery.

Being sole proprietor of a food business is intense work, but it's balanced by the appreciation customers show for her creative and varied menu that makes it easier for them to avoid undesired ingredients. Carr does caution that Sweet Alchemy's offerings may not meet the needs of those with celiac disease or nut allergies; items with wheat and nuts are prepared in the facility on the same equipment even though great care is taken to avoid cross-contamination. 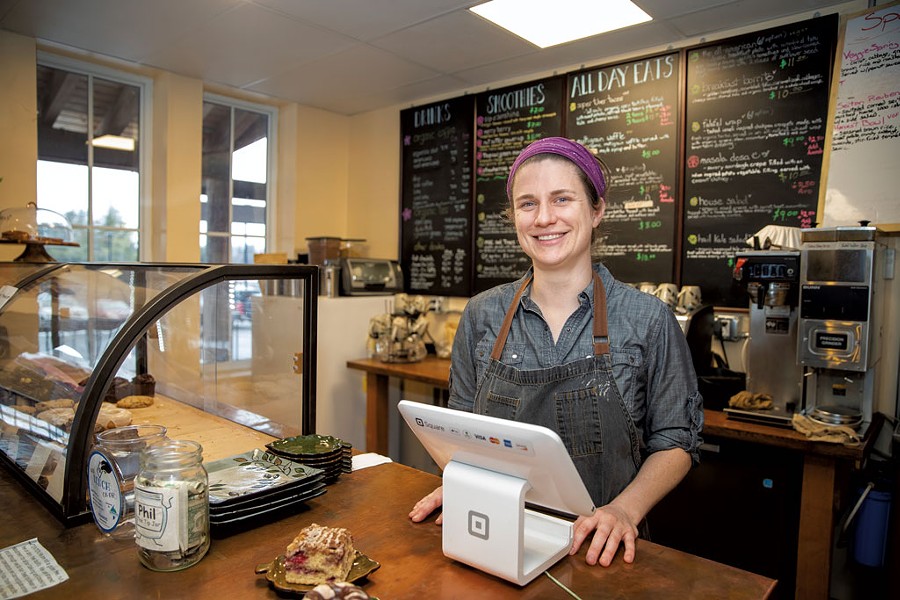 "I feel really lucky," Carr said. "I especially love when little children come in, and they start vibrating with joy because they can have anything on the menu. It's a small thing," she continued, "but also such a big thing when you can go out to eat."

Running Sweet Alchemy is more than a job. "Baking is my profession, but it's also who I am," Carr said. She grew up the youngest of four siblings — though barely younger than her twin, she noted with a smile. Her mother is a seventh-generation Vermonter from Rutland; her father, a University of Vermont alum.

Between the ages of 9 and 19, Carr moved with her family back and forth between the U.S. and southern India. "I saw it as a great lark," Carr said. "I had no idea that you could live in any other way." She spent two to six months of each year in India, where her entrepreneurial father had an importing business and her parents were members of an ashram, or "spiritual community."

She started baking in earnest when she went to college, her first experience with institutional education. "I was painfully shy and awkward in social groups," Carr recalled. Parties could be difficult, until "I figured out if I brought something to eat, like seven-layer bars in my backpack, it was a good way to break the ice, to make people happy."

Carr eventually completed her degree at UVM. After graduation, she taught English in Europe for two years, but her heart wasn't in it. "I kept coming back to baking," she said. "I felt most like myself in the kitchen."

Back in Vermont, Carr worked for several different food businesses, including Vermont Bean Crafters, where she helped develop a black-bean-based chocolate cookie and appreciated the company's efforts to model ethics and sustainability. When she was hired as a barista at the now-defunct Block Gallery & Coffeehouse in Winooski, she convinced her bosses to let her offer pastries. At the time, she was baking "all the regular buttery, wheaty stuff," she said.

But Block customers requested vegan baked goods, and Carr's next job, at Burlington's vegan Pingala Café, sent her further in that direction. Meanwhile, a friend's celiac disease diagnosis led Carr to dip a toe into gluten-free baking. "She was so sad," Carr said. "I tried a bunch of [gluten-free] stuff and said, 'There's no way it has to taste this bad.' I decided I was going to figure this out."

Carr clearly relishes the challenges of baking without ingredients others consider essential. She comes at it with a couple of advantages. First, her family did not eat eggs, so she has never cooked with them. She grew up eating her mom's excellent egg-free baking, she said, including an apple spice cake with brown sugar penuche frosting and an almond cake drizzled with bitter chocolate, both of which appear occasionally on her menu.

Second, Carr loves to "putz around the kitchen," as she put it. "I got really intrigued with making it work," she said. "It's chemistry. I'm a mad experimenter." Eggs, for instance, add fat and a lifting agent, so she tweaks recipes with a little more baking powder, liquid and fat.

On the savory side, Carr also grew up on food made without alliums, which are eschewed by followers of her family's spiritual tradition. She still uses no garlic or onions, yet you'll never miss them in her full-flavored food.

"The way I was raised informs how and why I cook," Carr said. It has also influenced her career path. "I was always destined to do my own thing," she reflected.

Having a café, however, wasn't part of her plan. Carr initially looked at the Essex Junction space as a place to expand her wholesale business. But when she and her dad checked it out and saw all the windows and the view of the Lang Farm gardens, "I said to him, 'I guess I'm opening a café,'" she recalled.

She maxed out her credit cards to make it happen, she admitted, and family help was essential. Her father, who had experience as a contractor, ran the project, working up until the day he went in for a planned knee surgery. Others, including aunts and her twin brother, pitched in. "This place very much feels like a labor of love," Carr said, her eyes filling for a moment. "It's built into the walls."

"The circle of reciprocity," as Carr called it, extends to her suppliers and customers, both individual and wholesale. Sweet Alchemy's baked goods are available at a handful of stores and cafés in Burlington and Montpelier. Those accounts keep her business stable: "They pay the bills and balance out the dips of the café," she said.

For her savory menu, Carr works closely with local farmers and food producers. Breakfast and lunch dishes are root vegetable heavy, she explained, "because I can get them from Vermont year-round, and they're delicious and affordable." Inventiveness and execution elevate these humble ingredients. Carr's south Indian dosa, the traditional lacy fermented crêpe made from ground rice and lentils, has a masala-spiced root-vegetable filling. Her Rainbow Roots shredded pancake, thin and crisp, is folded around scrambled tofu and kale.

Carr sources many of her vegetables from Bear Roots Farm in South Barre, tofu from Vermont Soy in Hardwick, and tempeh and miso from Rhapsody Natural Foods in Cabot. Some ingredients come from even closer. The Lang Farm location has garden space, and over the summer Carr grew all her own peak-season tomatoes and hot peppers, as well as cucumbers, greens, herbs and zucchini. She plans to expand the garden in 2019. "I have no life in the summer," she said ruefully.

Looking back over the past year and a half, Carr is a little tired but proud of what she and her team accomplished with the support of their community. Last year, when she broke her ankle, "people offered to help in all sorts of ways," she said. It was a reminder of why she loves what she does.

When she's in the back cooking, Carr prefers to leave the kitchen door open. "We like when people poke their head in to say thank you or ask questions," she said. It helps keep everyone motivated. "I think in some ways you have to be insane to do all of this," she said. "It has to be your passion."

Stonecutter Spirits Acquired by New Ownership, Will Stay in Vermont