Allan Nicholls on the Digital Reissue of His Band’s 1965 LP, ‘J.B. and the Playboys’

Vermont audiences might know Allan Nicholls best now as a member of the vaudeville-inspired Americana comedy band the Hokum Brothers, but he's had a long and storied career. A close friend and colleague of the late Robert Altman, the part-time Vermonter acted in and composed music for the acclaimed filmmaker's 1975 film Nashville and others.

Nicholls also appeared in the 1977 hockey comedy Slap Shot alongside Paul Newman, among other film credits. Prior to that, he played the lead role of Claude in the original Broadway production of the hippie musical Hair. He's also directed music videos for megastars such as Meat Loaf and Leonard Cohen.

But in the 1950s and '60s, the native Montréaler was big in the city's rock scene. Nicholls was the lead singer for J.B. and the Playboys, who were well known not only in Québec but all across Canada. As heard on their only record, a self-titled 1965 LP, the Playboys fully embraced the British Invasion sound, writing sweet, peppy love songs full of fast blues riffs, sweeping harmonies and catchy hooks.

At their peak, the Playboys opened for game-changing artists such as the Beach Boys and the Rolling Stones. But when Nicholls transitioned to Broadway in the late '60s, the band fizzled and, along with its lone album, faded into obscurity.

That is, until the mid-2000s, when Shawn Nagy, owner of the Super Oldies label, randomly discovered J.B. and the Playboys in a record store bin. In 2005, his imprint reissued the album and a few other singles as a CD anthology. But the album had never been released in digital format — until now.

After renewing interest among the band's members, Nicholls, who lives in Raleigh, N.C., and Ferrisburgh, reached out to Montréal jazz label Justin Time Records to see what could be done about launching the Playboys into the streaming world. Repeating the same release strategy the band used in the '60s, Justin Time dropped the band's three original double-sided singles shortly before rereleasing the LP. It hit the internet on February 19.

In 2019, the band re-formed for the first time in more than 50 years, with a mix of original and next-generation players. They performed one gig: the Hudson Music Festival in Hudson, Québec. A sort-of comeback was envisioned, with live shows planned for 2020. The pandemic temporarily quashed that goal.

In a recent call with Nicholls, he discussed the album's history and Montréal's 1960s music scene and revealed that J.B. and the Playboys plan to get back onstage as soon as it's safe to do so.

SEVEN DAYS: What kind of music were you and your bandmates listening to when you were writing J.B. and the Playboys? How did you discover music then?

ALLAN NICHOLLS: I was in a band in the late '50s, the Montereys. We played a lot of instrumentals with guitar leads. We played a little bit of rockabilly, like "Rock Around the Clock" and "Hey Little Girl (in the High School Sweater)." Then, in the '60s, our drummer had an aunt who lived in England, and she sent him this Meet the Beatles! album. And we listened to that.

Needless to say, we were immediately inspired. So we transitioned into writing our own melodic, harmony-based verse-verse-chorus, chorus-bridge, maybe. We were struck by the originality of the songs. We were also struck by the fact that they were doing almost girl-group R&B stuff. 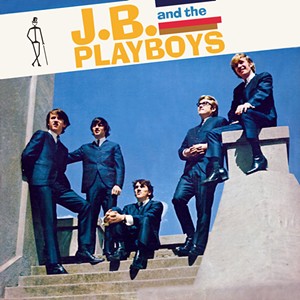 AN: It was very big, but it would be different in every province, because Canada is different in every province. The Maritime provinces deal with music a different way. They had a very large Black population and had a lot of R&B bands. Montréal and Québec had a very large French Canadian music scene. Toronto had more UK immigrants. Ontario was probably the focus of where the British Invasion came. Early on, those British tours would come over. I remember playing some shows with Herman's Hermits, Sandie Shaw, Adam Faith, the Searchers, the Dave Clark Five — all on the same show.

SD: Did the band ever make it down to Vermont back then?

AN: No, the biggest hurdle was always getting into the U.S. We could never break into the American market.

AN: It wasn't segregated as much as it became when the separatist movement took over. But the music scene was pretty nonsegregated. It was really kind of wonderful, actually. We played shows with French bands. I had great friends in the French music scene. We used to introduce ourselves onstage bilingually. I would make jokes in my poor French pronunciation.

SD: Artists today have a lot of freedom and can do whatever they want. How constrained were J.B. and the Playboys to fit a certain style or genre?

AN: We felt free to create, but we had a big challenge: We could never get on record the excitement we would get with our live performance. We had records played on the radio, and that was fine. But what we were trying to get to was a place where we could match the dynamics that we had onstage on a record. We never achieved that.

Another thing is that we were trying to get a different sound all the time. We didn't want to sound like the Beatles, any of the British bands. We wanted to sound like a new thing. And that was tough. We even tried country. We had a steel guitar, did some Buck Owens tunes.

SD: What about the way that you were styled and branded?

AN: We thought about it. Initially, the idea was to give the audiences something they couldn't see anywhere. We wore suits and gave them a high-end concert — in their high school. They never saw anything like us before. We even wore makeup. Not to make us look like anything else but what we were, makeup to enhance what we looked like.

SD: Here's one for all of the crate-diggers out there: What's a lost record like J.B. and the Playboys that you think vinyl enthusiasts should be on the lookout for?

AN: There are a couple of Montréal bands that I find terrific. One's called the Rabble, and the other one is called the Haunted. They were both contemporary bands of ours, but different. The Rabble were more psychedelic, I guess. The Rabble had this great song called "Give Us Back Elaine!" And the Haunted were Rolling Stones-like. They had a pretty big hit called "1-2-5." And that is a sought-after piece of vinyl.

The original print version of this article was headlined "Canadian Invasion | Allan Nicholls on the digital reissue of his band's 1965 LP, J.B. and the Playboys"