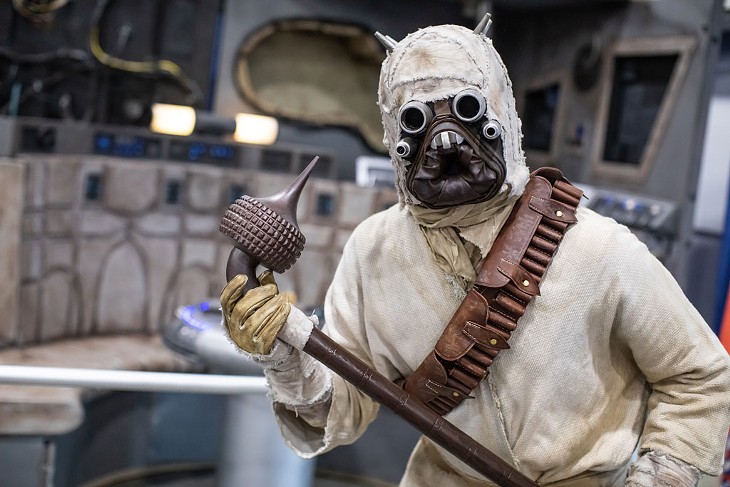 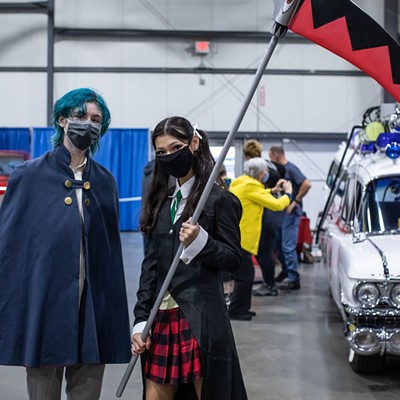 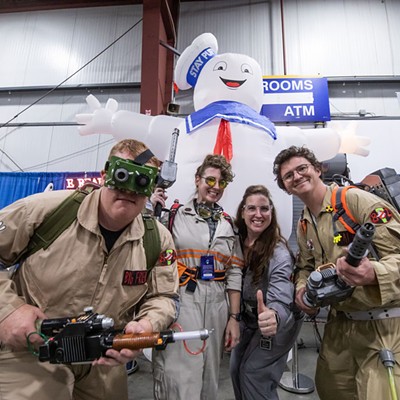 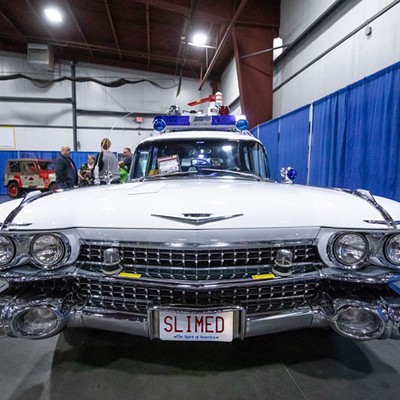 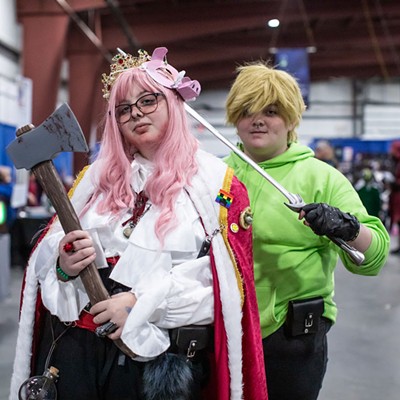 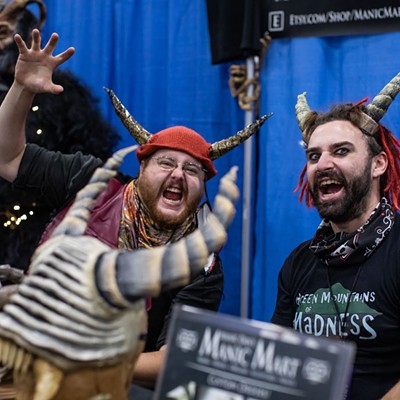 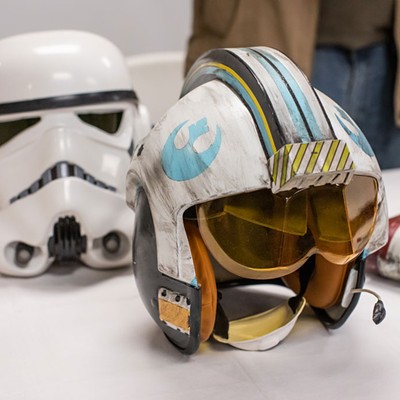 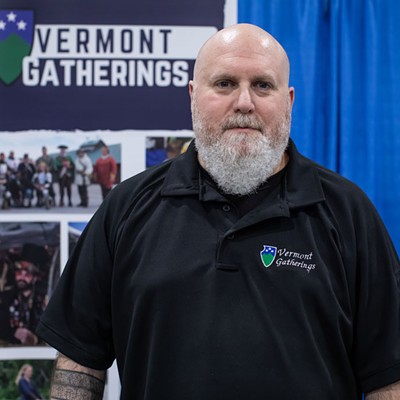 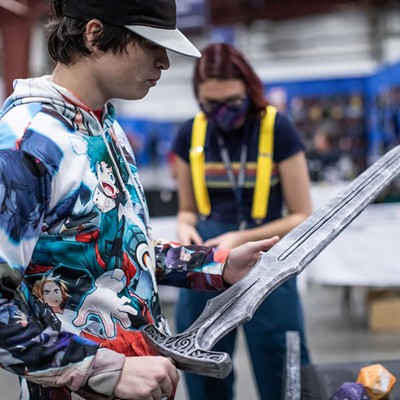 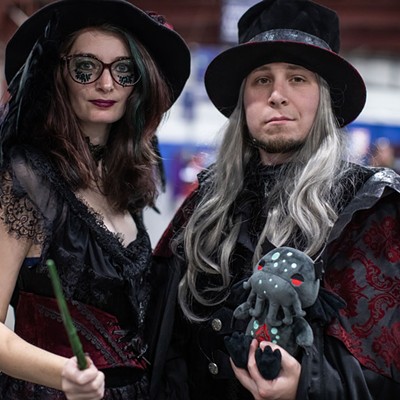 The Tusken Raider stared me down, menace oozing from their posture as they raised a gaffi stick over their head. The worn, dust-covered weapon loomed above me. Memories from well over 30 years ago resurfaced, and I had a long-forgotten reflex: My hand went to my hip, looking for a lightsaber.

Perhaps I was playing to the crowd a bit as I walked into the Champlain Valley Exposition in Essex Junction. After all, there were a handful of children dressed in full Jedi garb watching, as well as half a dozen or so adults in Stormtrooper armor flanking the entrance. Though I was wearing jeans and sneakers — criminally underdressed for such an occasion — I couldn't help but feel the instant sense of community the moment I reached for my imaginary laser sword.

Such was the magic of the second annual Vermont Sci-Fi & Fantasy Expo, held last weekend. The convention is home to lovers of geek culture, a catchall category that includes science fiction, fantasy, horror, comic books and even Sasquatch hunting. Vermont Gatherings owner and general manager Jeffrey Folb and his wife, Debi, launched the event, the only one of its kind in Vermont.

"People hear a lot about Comic-Cons," Folb said of comic-book conventions, as a woman in a Harley Quinn costume sauntered through the convention hall. "We do something a little different. We have authors, artists, gaming, prop makers ... Our focus is to give Vermont-based creative people a venue to show what they can do — but also to get the patrons involved so they might go home and try it themselves."

"I know so many introverts who become extroverts at these events."Jeffrey Folb tweet this

Strolling through the aisles, I found a diverse collection of people, most of them borderline giddy with excitement. Out in the "real world," vendors and attendees might feel marginalized for their nerdy passions. But at the convention, many told me, they feel safe and eager to be around so many like-minded people.

"If you're into genre or comics or costumes, you might be a little nervous to bring that up in conversation at a bar when you meet someone," said Folb, who met his wife at a Renaissance Faire. "But if you meet them at a convention, you can be pretty sure they're already into it! I know so many introverts who become extroverts at these events. These are people who are scared of rejection normally, but you're not going to find that here. We accept them."

Folb estimates that nearly 100 small local businesses and craftspeople participate in each event that Vermont Gatherings runs, including the Sci-Fi & Fantasy Expo, which offered at least 66 booths this year devoted to vendors, authors and organizations.

One business at the expo, New York-based Starforge Sabers, makes custom lightsabers on the spot. A saleswoman dressed as Star Wars favorite Ahsoka Tano, complete with blue skin and an elaborate headpiece, swung around two glowing sabers as she grinned from ear to ear. "They're almost impossible to break!" she exclaimed as she gave the concrete floor a whack with the lightsaber.

A blacksmith and leatherworker chatted me up about fitting me for a full suit of something called "dragon armor." Before that, I had a surprisingly long and entertaining talk with a gentleman who is pretty sure Bigfoot is chilling in upstate New York.

After making a few jokes about a Sasquatch running a bed-and-breakfast in the Adirondacks that really didn't land, I moved on to the Harry Potter booth. Two women called out to me, swearing they could already tell which Hogwarts house I would belong to. A sign above their heads read, "Are you a Muggle or a Wizard?" (I already know I'm Ravenclaw House, ladies, but thanks, anyway.)

A father and his two sons — one in a "Dragon Ball Z" outfit, the other in full Jedi garb — moved in to inspect the wands for sale at the Harry Potter booth.

"Is it weird to get two wands, Dad?" the diminutive Jedi asked his father.

Given that it was a sci-fi and fantasy convention, the dad's answer was not short. As he relayed everything he knew about wand lore from J.K. Rowling's book series, it struck me how much fun the adults and children were having together.

"Vermont used to have so many family events," Folb told me. "I feel like now it's all brew fests or other adult stuff. Or it's just a kids' event. We want to hold events for the whole family to come to together, where an 8-year-old and someone in their fifties can interact about what they're passionate about."

That passion was on full display as the 501st Legion marched through the convention. An international group of people who don Stormtrooper armor and other villain garb from Star Wars, the organization is all but ubiquitous at Comic-Cons and sci-fi expos, as well as charity events.

I bumped into fellow writer Andrew Liptak, who is a card-carrying member of both the 501st Legion and its heroic counterpart, the Rebel Legion. He wasn't in full regalia yet, but the patches on his bomber jacket made his affiliation clear. He also had a Rebel Alliance starfighter helmet tucked beneath his arm.

"One of the best things about doing this is seeing fan reaction," Liptak revealed. "When you see the look in someone's eyes as they take in the armor, when they see something in person from their favorite film, it's just a really cool feeling — for both of us, actually."

Other local writers and artists were out in full force. After stopping for a quick chat with cartoonist Robert Waldo Brunelle Jr. and checking out The Vermont Ghost Experience, which he published with Joseph Citro, I met a local author and auctioneer named Dean Whitlock.

"I try to touch on many genres," Whitlock said as he showed me his books. "I have a more young-adult sort of series about magic, but I'm also writing a so-called 'shipboard romance' called The Bell Cannon Affair."

The joy on Whitlock's face as he conveyed the plot of his latest book was unmistakable: Like so many others I'd encountered, he was in his element.

"I've been to the New York Comic Con," Folb said. "There are just so many people there. I went there, walked through the crowds, sweated my ass off, bought some stuff, then left. We don't want that. We want people not only having fun but also taking something away from the experience."

As I made my way to the exit after hours of geeking out, I watched a small crowd of people surround a replica of the Ecto-1, the car from Ghostbusters. Several cosplayers dressed in movie-accurate Ghostbusters outfits mingled, took selfies and sat inside the car. A college-age woman in an X-Men shirt pointed to the Proton Pack strapped to one cosplayer's back.

"That is so badass," she enthused. "I need one of those."

The last thing I heard as I left was the cosplayer explaining exactly how to build the prop. Folb's mission was accomplished.