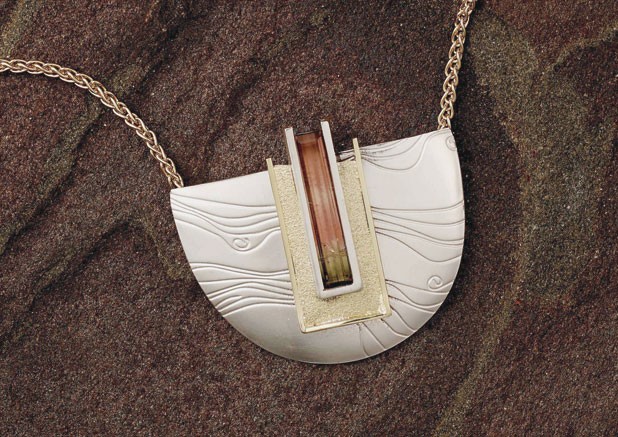 An upcoming exhibit that honors retiring art professor Laurie Peters applauds her 45 years at the University of Vermont. Actually, Peters insists it was “only” 41 years, though “before that I taught in elementary and high schools around the Burlington area,” she says. Either way, four decades and change is a long time to be influencing students.

And that she did. In fact, it could be argued that the results of Peters’ tutelage are more tangible than those many other teachers could claim. Consider the successful jewelers and sculptors in the area whose names you probably know: Timothy Grannis, Jane Koplewitz, Jacob Albee, Kate Pond, Chris Curtis, just to name a few. At least a couple — Donald Friedlich and Etienne Perret — have gone on to international careers. All were Peters’ students.

Peters’ courses in fine metals and “jewelry perspectives” at UVM gave each of these artists a solid foundation in the skills, tools and design possibilities of their craft. In a show that opens next Thursday, December 5, at Von Bargen’s in downtown Burlington, some 15 jewelry designers will convene to show their work alongside that of Peters herself.

The show, organized by recent UVM grad Jon Black and fellow art department prof Lynda Reeves McIntyre, is both an unprecedented gathering for the artists and a rare opportunity for the public to see the progeny, as it were, of a single beloved teacher. “To have that type of outcome for a teacher — it’s amazing,” suggests Black, 24, “and to see where Laurie has influenced each of the jewelers and their pieces.”

Peters, now 68, is a New Jersey native who lives in Warren and says she “prefers rural.” She’s not keen on talking about herself, but friends reveal that she has long been as passionate about playing polo, kayaking and traveling as about teaching and making jewelry. Peters readily waxes enthusiastic about the last, however, noting that metalworking is “addictive.” Her strategy in the classroom was simple: “If I can get someone who’s basically interested, I can get them hooked,” she vows.

Making jewelry is seductive, Peters suggests, “because you can put it on and take it with you and show it to people. Our society almost expects people to wear jewelry,” she adds. “It’s almost the only thing people wear that draws the world into you — an interesting piece can start conversations.”

That’s probably just what the jewelry in the Von Bargen’s exhibit will do — including generating discussion among the designers themselves. Their work will illustrate the makers’ grounding in solid technique as well as their individual, unfettered visions. Peters can take some credit — though she probably won’t — for both. To a person, those interviewed for this article acknowledged her for being tough — “She does not allow students to take shortcuts,” says McIntyre — and for nudging them toward their own artistic expression.

“I always admired how Laurie bounced back and forth between technique and design,” says Albee. “She was great at getting students to not be afraid of the tools, to get them to express themselves.”

For Koplewitz, Peters’ fearlessness proved an important model, even though she had learned welding in high school. “It was so encouraging to see a woman tackling this big equipment that could be dangerous if used in the wrong way — she taught us how to do things correctly and safely without fear.”

Peters emboldened her students in other ways, as well. Koplewitz notes that being required to draw in her fine-metals class was instructive. “Laurie really had us stretch in terms of how we saw,” she says. “You had to learn how to see, how to draw, how to express yourself before you even got to the bench work.”

Grannis, who graduated from UVM in 1976, remembers that Peters had students tackle big metal sculpture first as a way of working out visual and technical problems. “When your thinking is expanded, you’re opened up and [you] apply your opened mind to making tiny sculpture — jewelry,” he says, noting that jewelry design is more constrained. “It has to fit a body, be comfortable and wearable,” Grannis says. This kind of mind-expanding strategy was a hallmark of Peters’ teaching, he adds.

Peters’ own work — clean and minimalist in style — is “exquisitely designed and masterfully built,” says McIntyre. “She’s a technical genius.”

Yet, despite Peters’ own strong aesthetic, she didn’t “push it on anybody,” Albee says. “I see lots of people now who say, ‘I studied with so and so,’ and you can see that influence. That’s not a bad thing, but Laurie could help students find their own aesthetic.

“I don’t think her aesthetic influenced me, but her attitude absolutely did,” Albee adds. He summarizes that attitude as: “You can’t be afraid of it. Just sit down and do it. If it doesn’t work, it doesn’t work — but if you try, it probably will.”

That advice worked for Albee, 37, whose striking designs and eye for unorthodox materials — including meteorite — have led to a successful career. But other Peters students “are not doing it commercially,” she says. They just love making jewelry. One of them is Lynne Bond.

A professor in the psychology department at UVM and former member of the art faculty as well, Bond declares herself an amateur but has been taking the “extremely popular” evening courses with Peters “semester after semester” — for eight years. “After you’ve taken Introduction to Fine Metals and Advanced Fine Metals,” she says, “Laurie lets you sign up again and again, and often she’ll pick a theme for the course.”

Echoing students before her, Bond observes, “Laurie is very feisty and pushes hard, and never, ever coddles. But in pushing you, she tries to figure out where you are in your skill level and nudges you along.”

In the end, says Bond — who will have work in the upcoming exhibit — “you look back and realize how much you’ve learned.”

It’s a shame, then, that no more students at UVM will have the opportunity to share in this passion for artistic expression — or a career — in fine metals. With Peters’ retirement, the department is discontinuing the program, and that has put some of her former students in a state of mourning.

“I’m really disappointed,” Grannis concurs. “When I got out of the program, I was faced with ‘How am I gonna make a living here?’ I chose to go into jewelry because it seemed like I was going to starve if I went into painting or sculpture. I opened up a studio, and I made a living. I haven’t worked for a paycheck since.”

“I think the [art] department feels they just don’t have enough room to do everything they want to do,” Bond says diplomatically. “They’re desperate for space to do more sculpture, drawing, painting and printing — their four big things.”

So a literal and emotional sense of closure comes with the exhibit that opens next week — and with an event honoring Peters at the university earlier the same day. For her part, the teacher and designer quips, “It’s time to slack off a little and do my own work. And stop the driving at night.”

Still, Peters can’t help but look back fondly at years well spent with countless students. “I’m proud of the program, building it up from very few classes and improving the studio, getting the tools that allow students to try new things, and bringing new techniques into Vermont,” she summarizes. “And setting the students up in an environment where they could experiment and not worry about failure.”

Exhibit featuring Laurie Peters and 15 other jewelry designers, December 5 to 18 at Von Bargen’s in Burlington. Reception, December 11, 5 to 8 p.m.