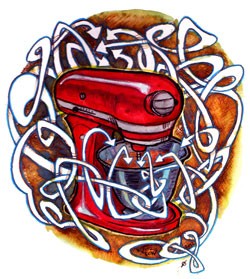 The KitchenAid stand mixer is the gold standard of wedding gifts. Over the past few years, I’ve watched my peers pair off, each couple acquiring the elegant, multipurpose cooking tool like a matrimonial medal of achievement. It’s a gorgeous piece of equipment, but I’ve often wondered how regularly my married friends actually use it. When you tie the knot, do you suddenly acquire such a rigorous cake-baking schedule that mixing by hand would be unthinkable?

I’m about to find out. I’m getting married in just under two weeks, and my fiancé and I have already received our own “bayleaf”-colored mixer. What’s more, it came with an embarrassment of specialty attachments, including a pasta maker, meat grinder and ice cream maker.

I am in my element when I’m in over my head. So perhaps it’s no surprise that my idea of a perfect Saturday — when I should be finishing DIY wedding projects such as making escort cards, sewing table runners or, I don’t know, writing my vows — involved a challenge. I planned to use every single attachment of my brand-new KitchenAid to make one over-the-top, entirely from-scratch, primarily local and seasonal meal for 10 guests.

I was tracking down recipes by 9 a.m. on the day of the meal. I made coffee and got pumped. And then I made a shopping list. And noodled around on Facebook. And talked to my dad on the phone. And putzed around in my laundry room. And before I knew it, it was past 10:30.

I’d told people to arrive at 7. No problem; I had eight and a half hours. I hopped in the car, parked in a 15-minute spot near the Burlington Farmers Market and dashed out. I cruised the stalls at a brisk clip, scanning for the items on my list. I found lush, jewel-like strawberries from Adam’s Berry Farm and huge bunches of rhubarb from the Farm Between. I snagged the last two heads of broccoli rabe, fringed with bright-yellow, edible blossoms, at the Jericho Settlers Farm stand.

I got back to my car just in time — no ticket! — and whizzed through City Market for cream, eggs, semolina flour, Parmigiano-Reggiano and unsweetened chocolate. Finally, I trekked to Shelburne Meat Market in Williston, where I’d heard you could procure sausage casings.

At the counter, I realized I had no idea what to ask for. I didn’t know what kind of meat to put in sausage, or how much of it to buy. When Travis Hunt, the guy in the white apron who makes the market’s sausage, asked me how many feet of casing I wanted, I started giggling. Feet? Um, I don’t know. Enough for 10 people?

At Hunt’s suggestion, I settled on three pounds of pork shoulder and five feet of casing. I watched as he pulled the slippery white casing from a plastic bag, winding it around his fist like twine. He cut off my portion and put it in a smaller bag, which he topped with water and a sprinkle of salt. “Uh, this is somebody’s intestine, right?” I asked, trying to sound like I knew a thing or two.

It was. I paid for the meat and got the casings for free. I’d been anxious this dinner party was going to break the bank, especially when I’d decided to buy largely local. And I hadn’t intended to invite 10 people. I’m a nervous hostess, the kind who worries that no one is going to show up, so I just kept inviting people — and everyone said yes.

When I finished my shopping, I added up the damages: $66. This was going to be the cheapest dinner party ever!

I raced home to get started. It was already 12:30. I had six and a half hours. When a friend called to ask if I needed anything, I made the executive decision to nix the from-scratch garlic bread. “Pick up a couple baguettes?” I asked.

A little more than an hour in — after the cake was safely in the oven — I hit my first snag. I hadn’t opened any of the attachment boxes yet, let alone read their instruction manuals. The ice cream maker came with a frightening number of complicated-looking pieces and a quick-and-dirty instruction sheet, which advised, to my dismay, storing the bowl in the freezer for 15 hours before beginning an ice cream project. Yes, 15 hours.

I found no consolation in my recipe, which instructed me to let my custard refrigerate overnight before pouring it into the ice cream maker, then to store the churned ice cream in the freezer for four to six more hours before serving.

Here’s my beef with recipe writers: Would it be too much trouble to print a warning to the hapless home cook — perhaps in bold, red, capital letters at the beginning of a recipe — when the project should be started a day in advance? Why must the instructions to leave something overnight always appear halfway down the page?

Fuck it, I decided. I’m making the ice cream anyway. If it turns out as slop, we can spoon it over the chocolate cake like cold, strawberry cream. Yum.

It was almost 2 p.m. I made simple custard with milk, cream, eggs and sugar and whisked it for what seemed an eternity. Why wasn’t it thickening? I knew that if I let it boil, I’d end up with scrambled eggs. But I didn’t have a thermometer. So I watched vigilantly for the slightest change and kept my nose on high alert in case the cake was burning.

My heart was pounding because I’d been guzzling the leftover coffee I’d brewed for the cake. I hadn’t made any sort of cooking schedule, so I jumped and ran in place while deciding what to do next. I felt like a delinquent contestant on “Cupcake Wars.”

By the time I finished the cake glaze — chocolate, butter, powdered sugar, sour cream and coffee — and boiled the strawberries with lemon juice and sugar for the ice cream, it was 4 p.m. Three hours left.

I opened the pasta-maker box with trepidation. Would its booklet tell me to let the dough sit overnight? The dinner party could go on without ice cream. But it would be a disaster without a main course.

Thank the Lord. Fresh pasta, it turns out, is best when served fresh. I switched out the KitchenAid’s whisk attachment for the flat mixer and doubled the recipe for semolina pasta I found in the pasta-maker booklet.

The dough was gorgeous: yellow, firm and forgiving. I cut it into small logs, about three-quarters of an inch thick, and prepared the mixer. The pasta-making set comes with three attachments (plus a dainty little brush, presumably for egg-washing ravioli): a flattener and two cutters, one for linguine and one for spaghetti. I unscrewed the cap from the front of my mixer, inserted one end of the flattener and tightened it into place.

Apparently, I didn’t tighten it enough. No sooner had I turned on the machine and begun to feed my dough through the spinning wheels than the whole attachment began to spin. It flopped around wildly, while I screamed, until it loosened itself from the mixer and shot out onto the floor.

On the second try, after some more-attentive attaching — the fixture had been facing the wrong direction — it worked like a charm. And I quickly got the hang of feeding the dough through the spinning wheels, gradually tightening them with each pass until I had delicate scarves of pasta dough ready to be cut.

It was 5:45 when I started the sausage. Luckily, two guests arrived early. I put them straight to work hacking pork shoulder into chunks small enough to pass through the meat grinder. There’s really no better dinner-party icebreaker than asking your guests to grind meat. While one of them gleefully jammed pork into the feed tube, his girlfriend squealed in delight as it squirted out the bottom in squishy pink ribbons. “It looks like brains!” she cried out.

The KitchenAid sausage-casing attachment, we learned, is sold separately. So we didn’t get to experience the rude joys of slipping the condom-like casing onto the nozzle and filling it with meat.

No matter. We mixed our ground pork with fresh sage from a coworker’s garden, several cloves of garlic, salt, pepper and a generous pinch of red pepper flakes and browned it in a sauté pan.

It was a miracle — the meal was coming together! Guests were arriving, finding their way to the wine, beer and garlic bread. Pretty soon all 10 of us were happily crammed into the kitchen. I carried industrial-size pots of boiling pasta water from one side to another, nimbly avoiding guest’s toes, and enlisted volunteers to chop broccoli rabe, set the table and offer creative solutions to new dilemmas.

The last big one: We had to set up the ice cream maker. One person flipped through the instruction manual while three of us tried out different configurations for the perplexing plastic pieces: a medium-size ring, a mixing paddle, a plastic contraption and the bowl, which had now been in the freezer for about five of its recommended 15 hours.

Finally, with a mixture of ingenuity and force, we got the machine running. I poured the creamy custard into the spinning bowl and breathed a sigh of relief. The last piece of this ambitious dinner extravaganza had come together — even if it never quite turned to ice cream.

At 8:30 p.m., we popped three bottles of bubbly and dove into the meal. I’d forgotten all about the rhubarb syrup. Maybe next time.