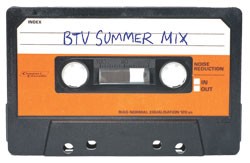 More than any other season, summer requires a soundtrack and at least one or two good anthems. While many will turn to the guilty pleasures of mainstream pop, we’d encourage you to add some local flavor to your summer playlists, too. After all, one can’t subsist on Kanye alone.

So with that in mind, here’s a mixtape of some great new local music to blast in your Beats headphones, whether you’re laying out on the beach, straight floatin’ on a boat, or simply chilling in the backyard with a cocktail.

Whether you’re compiling tracks to woo the object of your desire or to simply rock out, there is an art to any good mixtape. And the two most important cuts are the first and last. There needs to be a discernible flow, which means setting the tone from the start. You don’t want to overplay your hand, but you also need to grab the listener’s attention with a killer opener. To that end, we’re leading off with the shake and stomp of the aptly titled “Warm Chills” by Persian Claws. Actually, we could go with any song from that band’s recently released, self-titled garage-rock opus. It’s pretty much the perfect summer record. persianclaws.bandcamp.com

The Pilgrims, “Duck and Cover”

We’re big fans of the Pilgrims, a punky little outfit who reside on Windsor-based micro-label What Doth Life. “Duck and Cover” is the first single from that band’s forthcoming new album, Buss, due out in July. It’s a crazy-catchy tune that seems to share some angular DNA with early Ted Leo and the Pharmacists, or maybe the Angry Young Men-era work of Messrs. Costello, Parker and Jackson. Oh, and it’s got more hooks than a tackle box. pilgrimsvt.bandcamp.com

Doctor Sailor, “Laying It Down by the Ocean”

Villanelles have been a local staple of our summer playlists for years. Unfortunately, their new record won’t come out until front man Tristan Baribeau comes home from Alaska later this summer. Luckily, Baribeau was kind enough to offer “Laying It Down by the Ocean,” the lead track from The Greatest Lyric, released this spring under the pseudonym Doctor Sailor. Simply put, the song is as breezy as its name implies. You can almost smell the salty air in its bright, rolling guitar riffs. doctorsailor.bandcamp.com

This is a mix of summer jamz, so we should resist our impulse toward melancholia in favor of lighter fare. After all, we’ll have all winter to be mopey. “Lullabye” from Montpelier’s Scott Baker (ex-First Crush) tiptoes the line. It’s mellow, but comfortingly so. Released on the local comp State & Main Records: Volume II, its gentle sway and warm Belle & Sebastian-esque melody makes it the perfect cut for relaxing by an evening campfire with a cold one after a long day in the sun. stateandmainrecords.bandcamp.com

After a pair of relatively low-key entries, it’s time to pump up the volume. Enter “Eighty Nine,” from the self-titled debut EP by Burlington garage rockers Black Rabbit. Snarling and deliciously lo-fi, we can’t remember a song that makes the combo of “lemonade and cigarettes” sound so damn good. blackrabbitvt.com

“The Prize” is the lead single from Ryan Power’s new record, Identity Picks. We won’t lie. That album is not for the faint of heart, or ears. It’s a recording that takes a concerted effort to fully appreciate and understand. We think it’s more than worth that effort, precisely because of songs such as “The Prize.” Easily the most accessible and catchy cut of the bunch, it’s a bright, bustling slice of electro-pop genius with not-so-subtle nods to Hall & Oates. That’s right, Hall & Oates. You know you love it. ryanpower.org

Burlington’s Nuda Veritas never fails to impress. Or confound. Her latest EP, Meaty Hooks, is well named. Indeed, it has no shortage of sticky hooks, couched in her singular avant-pop style. “Never” is that record’s closing cut, a propulsive number that kind of evokes Deee-Lite on a meth bender. But in a good way. nudaveritasmusic.com

Heloise and the Savoir Faire, “Bottom to the Top”

Continuing on a theme of arty dance-rock, Diamond Dust, the latest full-length from Heloise and the Savoir Faire, is likely to be in heavy rotation on the stereos of discerning dance-music fans, locally and beyond, this summer. That’s because tunes such as the Madonna homage “Bottom to the Top” are just irrepressibly groovy. heloisemusic.com

We’re closing with a tune by local duo Shark Victim with sincere hopes that it’s not a harbinger for those vacationing on Cape Cod this summer. Jaws-inspired paranoia aside, “Theme Song,” from the band’s recently released debut EP, Scenes On the Outside, sounds something like what might happen if Dum Dum Girls beat up the perky singers from the Go! Team and kidnapped their band. And then made them play fuzzed-out bass guitars at gunpoint. sharkvictim.bandcamp.com