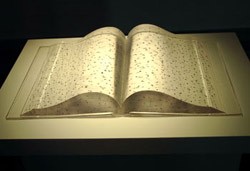 Light fascinates visual artists, yet it has always been a bit of a conundrum. Even after the invention of light bulbs, Paul Cézanne asserted, "Light is a thing that cannot be reproduced but must be represented by something else - by color."

The contemporary participants in "Art Now: Transparency" at the Middlebury College Museum of Art conceive of light's effects in a whole different way from the Impressionists. Notions of reproducing and representing the visible spectrum are not among the concerns addressed in this exhibit - that is, in pigment. Indeed, light seems to emanate from, rather than fall upon, objects in the dimly lit gallery.

Seven of eight pieces in this show are sculptures. Seattle artist Mark Zipel took advantage of new technologies in the creation of his 40-by-30-inch work "Leaf." It features a graceful lanceolate leaf form - perhaps a long, pointed ficus - sandblasted horizontally onto a clear, gently arced glass surface. Zipel's hyperrealism results from transferring a digitized leaf in the design process. When the design is applied to the curved glass, fine textures illuminated from below make the silvery leaf appear to float above a base.

Lighting thermoplastic resin generates a similar illusion in a piece by internationally known mixed-media artist Richard Humann entitled "Codex." The 11-by-17-inch translucent open book contains dozens of jumbled, shimmering letters beneath its pages. Much can be "read into" this work - the symbolic motif of a glowing text, familiar in Western art, dates back to images of Bibles in medieval Christian iconography. Humann's tome is both indecipherable and illuminated - though not in the same sense as an illuminated manuscript.

Dennis Byng is a pioneering Lucite sculptor who's been creating abstract geometric works since the 1960s. His 1974 "Split Cube" is sliced into two pieces positioned 5 inches apart. The halves, called cuboids in geometry, refract the primary colors of light - red, blue and green - like large jewels. One cuboid is dominated by warm colors, the other by cool ones. Blended sapphire-blue and emerald-green reflections produce a rich yellow topaz within the warm-colored cuboid.

Middlebury art professor Hedya Klein's "Xanadu" is a three-tiered wall of a dozen 12-by-16-inch wooden light boxes. Each presents blown-up photos of different manifestations of light reflecting from various surfaces, such as gemstone facets. The mounted light-box photos are misty, and the lack of sharpness and specificity renders the images nearly abstract.

The eighth work in the show is a 2-minute video called "Ocularis" by Berlin video artist Bettina Pousttchi. It shows electromagnetic waves flowing outward from a dot of pulsing red pixels on a 14-inch Apple flat-screen monitor, like a red star on the ceiling of a planetarium. As the image glows and grows beyond the red spot, layers of iridescent color flood the screen. A fantasia of space music, described in the curatorial statement as a "soma-like soundtrack," accompanies the video. The effect is mesmerizing.