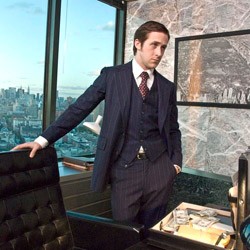 The fiction-feature debut from award-winning documentary filmmaker Andrew Jarecki is as schizoid in many respects as its main character. As he did in 2003’s Capturing the Friedmans, the director spills a dysfunctional family’s dark secrets. This time, though, the result comes across as two completely separate movies stitched together.

All Good Things is based on the true story of Robert Durst, the black-sheep heir to a Manhattan real estate dynasty. In the film, his name has been changed to David Marks, and his story is told in flashback from the witness stand of a 2003 murder trial in Galveston, Texas Ryan Gosling stars.

In his early 1970s incarnation, Marks is a thoroughly sympathetic figure, an affable pothead goof-off who doesn’t remotely fit into the world of his domineering father, Sanford (Frank Langella), or have the slightest interest in the family business. He takes an immediate interest, by contrast, in a tenant whose leaky sink he’s sent to repair.

Recently arrived from Mineola, Katie McCarthy is everything Sanford Marks would look down his nose at — a qualification that, along with her sunny smile and unfettered spirit, inspires his son to make her Mrs. David Marks. Kirsten Dunst delivers a beautifully calibrated performance.

Eager to make a clean break, the pair escape to Vermont to realize David’s dream of opening a health-food store, and, for a time, they are blissfully happy together. The name of the place is, yes, All Good Things. I wish Jarecki had lingered a bit longer on this chapter, so we could have a clearer sense of the early months of the couple’s marriage, but it’s virtually a blur. Before you know it, never-clearly-explained pressure from the old man has brought David and Katie back to the city, where they live in luxury but ever-diminishing bliss.

The principal reason life becomes a hell for Katie: Her husband suddenly and without satisfactory explanation descends into madness. One minute they’re happily purveying tofu; the next, David’s talking to himself and roughing her up at a family reunion — her family’s!

Dunst does a convincing job of conveying the confusion and mounting fear her character experiences as she gradually realizes she no longer has any idea who David is. But her contribution ends when, in 1982, Katie vanishes without a trace. We’re told her body has never been found.

That’s the first movie. The second follows David as he moves to Texas and assumes a new identity as a woman. What ensues is a lurid series of deceptions, betrayals and murders, complete with glimpses of dismemberment but lacking meaningful insight into the central character’s motivation. Oh, sure, his father’s a manipulative bastard, and we learn that, as a child, David witnessed his mother’s suicide. But it’s a little too much of a leap to say this background explains a penchant for interstate cross-dressing and homicide.

Gosling’s affect-free, almost zombielike performance in this part of the picture offers little help. As a result, we’re left with an artsy version of the sort of true-crime tabloid melodrama that would normally be the province of the Lifetime channel.

Of course, it’s interesting that this tale is based on real-life courtroom testimony — at least, the portion that isn’t wholesale speculation. And it’s interesting that the film’s subject, Robert Durst, was never convicted of any of the misdeeds depicted. (A free man to this day, he reportedly attended a private screening and gave the movie a thumbs-up.) But those sensational elements aren’t likely to give the picture much interest to most viewers. Thanks mainly to Dunst, it has its moments. Virtually all good things to be said about it, however, concern its first half.