On a paddle with dragon boat racers 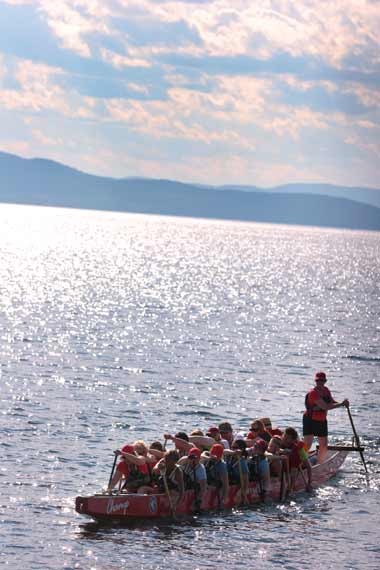 Waving their paddles and smearing on sunscreen like war paint, the men and women clustered behind the Lake Champlain Community Sailing Center on a Monday evening in July look like they're conspiring a mutiny. In fact they are members of Dragonheart Vermont, a dragon-boat racing club, and they're about to hit the water for a different sort of battle.

The sport of dragon boating, in which 20-member teams paddle 40-foot-long canoes decorated like the mythical, fire-breathing beasts, arrived in Chittenden County in 2004. But it really blew everything else out of the water last August, when the Lake Champlain Dragon Boat Festival attracted 52 teams and 12,000 spectators. I watched enviously as the dragon boats furiously raced, so I was game when Dragonheart Vermont invited me to one of this summer's practices.

When I arrive for the early-evening paddle, I discover that the teams are busy prepping for not only the 2007 fest on Lake Champlain - scheduled for this Sunday, August 5 - but also major championships in Montréal and Australia. A former competitive rower, I assume this will be a breeze, and I swagger confidently toward the red shed behind the sailing center to receive my paddle. Dragonheart member Jim Cross eyeballs me and calls for a size 45 paddle, the shortest available.

"But I've rowed crew," I protest, figuring I deserve a longer paddle to give my strokes more oomph.

"But this is different," he says firmly.

Cross reviews some of the dragon-boating terminology with me. To "sit pretty" is to lean forward with the paddle out. To "hold water" is to stop. "You know canoeing and kayaking?" he says. "Well, this is nothing like that."

Then, Coach John Dyer places me with 19 women who have something in common beyond their matching lifejackets and paddles. "These are breast-cancer survivors," he explains as we walk toward the dock. "They're going to blow you away today."

Dragon boating has long been associated with empowerment. The sport that now has nearly 50 million participants worldwide originally surfaced more than 2500 years ago in China. There, farmers would race the "dragons" - which symbolize control over water - at the summer solstice to rail against the whims of nature that might threaten to destroy their crops.

Fast-forward to 1995. That's when Don McKenzie, a sports-medicine physician in Vancouver, B.C., was studying the effects of exercise on breast-cancer survivors, who had long been told to keep their activities to a minimum. He chose dragon boating as an example because it tests the limits of the upper body, and also because it provides teamwork and a soothing, on-the-water activity.

By 1996, McKenzie had pulled together a group of paddlers, called Abreast in a Boat, for the Vancouver Dragon Boat Festival. By the time they competed, the women had become hooked, and they started spreading the word about dragon boating. New teams soon formed across Canada.

Now the sport has trickled south to the United States. At least nine states have teams, including Hope Afloat in Philadelphia, Pennsylvania, the Pink Phoenix in Portland, Oregon, and the Orange Roughys (motto: "We're so rough we beat cancer") from Orange County, California.

Dragon boating came to Burlington thanks to Linda Dyer, who had paddled with Hope Afloat before moving to Vermont from the Philadelphia area with her husband, John, in 2003. "We saw the lake and had a dream that this would be the perfect place for dragon boating," says Linda. She began recruiting prospective paddlers and arranged to borrow a boat from Boston for the summer of 2004. Dragonheart Vermont, a nonprofit organization, was born.

Three years ago, Dragonheart's 55 paddlers shared that single borrowed boat. Thanks to various fundraising efforts and a donation from Fletcher Allen Health Care's radiation oncology department, the team now keeps five boats on the Burlington waterfront throughout the summer. And its ranks have swelled to 165 members, many of them breast-cancer survivors.

At our Monday evening practice, I'm sitting in front of Louise Crawford, a 65-year-old retired bookkeeper from Ferrisburgh who had breast cancer 10 years ago. "I've never been a very competitive person," she says. "But I love being out on the water."

Each boat has 20 seats. Toward the bow are the "pacers," who, well, set the pace; behind them is the "engine room" that provides much of the power. Toward the stern are the "terminators," whose short strokes and quick recoveries help the boat move smoothly through chop created by other paddlers.

Sitting two abreast, we fit snugly in the boat. In front of me is Katie O'Connor, 45, of Shelburne. She was diagnosed in June 2004. "This is a sorority that none of us ever intended to join," the Champlain College project manager says wryly. "But it's been one of the biggest blessings of my life."

Coach Dyer stands in the stern of the boat, steering and shouting directions. During races, a drummer at the bow pounds in sync with the strokes. Many of the survivors are also drummers; they say the rhythm is another way for them to connect with one another.

"Sit pretty," says the coach. Before I know it, we're off. And so am I - I've already lost the rhythm, and my paddle starts clacking against Crawford's. Dyer reminds me to watch the paddlers in front instead of keeping my head down. Already breathing hard, I'm humbled. This is, indeed, nothing like rowing, canoeing or kayaking. As we pass the Boathouse restaurant, Splash, I gaze at it longingly, wishing for an ice-cold cocktail.

Paddling by Splash and its sister bar, Breakwater, has become a tradition for Dragonheart Vermont, I learn. "It makes our night," says Linda Dyer. "We always get cheers and claps, and it gives us the energy to keep going. If the music is playing at Breakwater, we usually do a little paddle dance."

Elsewhere on the lake tonight are two other Dragonheart boats filled with more survivors, as well as supporters. One of the latter is Damien Cross. The 26-year-old from Burlington joined the team for his mom, who was diagnosed with breast cancer in 2003. Later, he tells me that paddling gives him a good workout as well as the feeling of doing something good. "Every time I go out there I'm able to exceed my limits," says Cross, who works for Select Design. "I'll always remember the times I've been out there in rain and waves toughing it out."

Rain? Waves? As I break from paddling to watch the silky sheen of the lake and the shimmering hulls of nearby sailboats, it's hard to imagine inclement weather. But, as Linda Dyer explains, the mercurial nature of Lake Champlain harks back to dragon boating's beginnings - as a battle with nature. "Some people paddle on these nice little waterways," she says. "It can be a challenge with the wind and the waves - our boats have even sunk when they've been moored."

Conditions were ideal at last year's Dragon Boat Festival, which raised $35,000 for a new ultrasound machine for Fletcher Allen's radiation oncology department - the same one that donated money for the Dragonheart boats. This year, proceeds from the daylong event will go toward Vermont Respite House, a hospice for the terminally ill in Williston. Seventy-seven community teams have entered the festival. Many are from Fletcher Allen, including Bottoms Up (the endoscopy department), Dragons Bugs (infectious disease), It's Not Just Luck (breast care center), Rays of Hope (radiation oncology), the Bye Bye Belly Club (labor and delivery), and the Emergency Crew (ER staff).

Dragonheart has also invited 12 breast-cancer-survivor teams to participate in the special Well Healed Challenge workshop on Saturday, August 4, and to compete in Sunday's races. All told, nearly 100 teams of 20 paddlers and one drummer each will be racing a 250-meter course. They'll take turns boarding 10 different boats at the sailing center and racing every 12 minutes.

During our practice, I begin to understand the sport's addictive appeal. Once I learn to relax and watch my teammates, I get the hang of the stroke and feel the serenity of the synchronicity. "It's the ultimate team sport," Linda Dyer says. "You just feel that incredible glide, and, for breast-cancer survivors, there's this incredible sense of empowerment when you're out there and you're feeling that connection and you're not thinking about cancer."

On this night, though, the whims of nature win out. Just as we get into some sprints, thunderheads roll in, and a few spits of rain quickly turn into a downpour. Spotting lightning, we paddle to the docks as fast as we can and scramble for cover. Everyone looks out for one another, grabbing paddles for storage, securing boats, and sharing raincoats.

Then I realize that even a "wet blanket" can't bring down the indomitable team spirit of Dragonheart Vermont. That camaraderie lured Burlington resident Liisa Reimann, 38, to Dragonheart last year. "It's very uplifting," says the web designer and historic-preservation consultant. "No one judges or criticizes you. Nothing depends on one person alone."

The Lake Champlain Dragon Boat Festival begins at 8:30 a.m. on Sunday, August 5. After a day of races and performances, the awards ceremony is at 5 p.m.

Because of limited parking, organizers encourage participants and spectators to carpool or take the bus. www.ridethedragon.org