All Eyes Are on a Consultant Reviewing Burlington’s Police Department 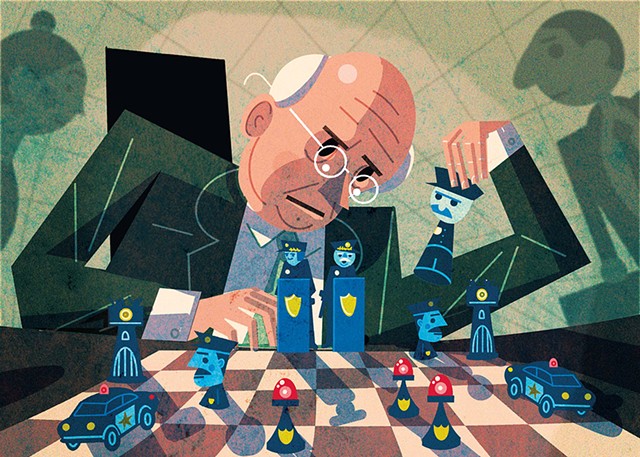 Last June, hundreds of people called in to public meetings to demand that the City of Burlington reduce its reliance on police officers and instead invest in other public safety measures. City councilors listened, voting 9-3 to reduce the police force by 30 percent, through attrition. They also ordered up a study to answer a vital question: If police were no longer responding to certain calls, who would?

Nine months later, that study is just getting under way. A joint committee of city councilors and police commissioners has hired CNA, a Virginia-based nonprofit, to assess "who, what, where and how" the department polices, to quote a city document. CNA's team of nine — a social worker, a police oversight expert, two retired police officers and several data analysts — officially started the job last week. The agency, which the city will pay about $100,000 for the analysis, is expected to deliver its report by the end of June.

Though the CNA consultants have just begun their work, much already hinges on their findings. About a dozen officers have left since the council's roster-cutting vote, plunging the department into what Mayor Miro Weinberger has labeled a staffing "crisis." A handful of those officers have said the Progressive-led council's recent decisions spurred them to leave.

Adding to the instability, the department has been without a permanent police chief for more than a year, and the city has yet to reopen its nationwide search for one after putting it on hold because of the pandemic. Meanwhile, a lackluster and largely plagiarized final report from Kyle Dodson, who recently completed a six-month stint as the city's first director of police transformation, has made CNA's assessment all the more vital in charting the city's police reform efforts.

Members of the joint committee are optimistic that CNA will deliver what Burlington needs: a plan to move forward after months without one.

"Right now, the practice in Burlington is to do what we've been doing, but policing is changing all over the country," said Stephanie Seguino, a police commissioner and a University of Vermont professor of economics who has studied racial disparities in local policing.

"There's a lot of weight on this, there's no doubt, because we are at a stalemate," Seguino said of the study. "I hope in general that what we have is an objective, outside entity that can come in ... with a lot of deep experience [and] be able to help us."

CNA is nationally recognized for its work studying law enforcement agencies, but the organization got its start as a military contractor during World War II. The agency formed in 1942 to help the U.S. Navy fight Nazi Germany's U-boats, and military contracts now make up the bulk of its income. CNA spent $29 million on its Operational Warfighting division, which helps the U.S. Navy "organize, plan, train and execute at the operational level of warfare," according to its 990 federal tax form for 2018, the most recent available on the GuideStar website.

CNA has a Public Research Institute that is distinct from the rest of its operations. Its proposal was one of 12 reviewed by the joint Burlington committee, with cost estimates ranging from $32,500 to nearly $219,000. Seven Days' public records request for the other proposals is pending.

When the committee chose CNA, some questioned whether a company rooted in militarism could objectively critique a police department. Councilor Zoraya Hightower (P-Ward 1), a member of the committee whose father was in the U.S. Army, said she was skeptical until she read about the team assigned to Burlington.

Seguino, too, said she was impressed by the team's credentials. For 20 years, CNA has worked on various reforms with more than 400 law enforcement agencies, from Maricopa County, Ariz., to Methuen, Mass. The Burlington project lead, Julie Solomon, is a licensed clinical social worker who has experience with "supervision, oversight and compliance with policies, practices, [and] procedures related to police interactions with community members," the company said. Solomon and another team member, Stephen Rickman, currently work as independent monitors to ensure that the Chicago Police Department carries out court-ordered reforms related to a federal civil rights investigation. The team is also racially diverse. No member has a military background, according to Brittany Cunningham, a research scientist and the deputy project lead in Burlington.

Those qualifications are more important to Seguino than CNA's Navy ties.

"The firm itself is not the issue here," Seguino said. "Consulting firms have wide ranges of portfolios; it's who is writing the reports that matters."

Indeed, in Burlington, the person overseeing the assessment has been more controversial than the company performing it. Dodson, the director of police transformation, was initially tasked with leading the project, but his tenure ended before CNA's contract was inked. Weinberger then appointed Darren Springer, the general manager of the Burlington Electric Department, to be CNA's point of contact, despite a city council resolution that directed Tyeastia Green, the city's director of racial equity, inclusion and belonging, to sign the contract.

Weinberger said he made the switch because Springer, a white man, had been "neutral" in debates over police staffing, implying that Green — the city's only Black department head — was not. After public backlash, however, the mayor put Green in charge.

Green said she will make sure CNA sticks to its budget and its proposal. That includes pushing the team to present "creative" recommendations for police reforms — not "recycled options that have failed in other cities," she said.

"They have to be tailor-made for Burlington," Green added. "Having a public safety apparatus that is focused on the community and community input, I think, will go a long way."

Green has already given CNA a list of nearly 50 people and organizations to interview, though the group's proposal only anticipated talking to 20. Researchers will interview police personnel and rely on the work of Talitha Consults, a Washington State-based firm that has been surveying residents about their vision for public safety. Talitha's final report is due in early May. Green will post those findings, along with CNA's work, on a project website that she hopes will launch this week.

"Policing has been such a volatile topic, for good reason," Green said. "Because of that, because of the high-profile status of this report, I think it's important to be transparent as much as we can along the way."

CNA also plans to issue findings on racial disparities in traffic stops and in police use of force. The team will review call volumes and suggest types of incidents that could be handled by civilian staff. This could include embedding mental health clinicians into 911 call centers and creating "intensive case management teams within police departments," CNA's proposal says. The city has already planned to hire unarmed workers to help people with substance abuse and mental health issues. Weinberger aims to have those employees on board by this summer.

The city has asked CNA to provide a "menu of services and options" for public safety instead of simply suggesting a certain number of officers.

"I really am hoping they give us data and that we can make decisions [based] on that," Hightower said.

Cunningham said the report will include numerous recommendations "that are feasible and actionable" in Burlington. CNA will also collect feedback on its draft report, which should be finished by mid-June, she said.

Acting Police Chief Jon Murad thinks the council should have ordered the assessment before reducing police staff, but he said he's pleased the study is finally under way.

"I think we all want public safety that is equitable, non-discriminatory, and respectful of community values — and that also keeps people safe," he wrote in an email to Seven Days. "I'm hopeful the CNA assessment helps Burlington continue working towards that, and I'm eager to supply the consultants what they need to do their work."

Weinberger believes the report is a chance to finally find consensus after months of public controversy. He encouraged residents to attend the joint committee's monthly meetings and share honest feedback on CNA's progress.

"We're putting significant time and resources into this report," he said. "It's important that this report be trusted and seen as an excellent report by all Burlingtonians."

CNA's work elsewhere has garnered mixed reviews. Its 2019 audit of the police department in Charleston, S.C., found staggering evidence of racial bias. Black people there were subjected to force at a rate nearly three times higher than would be expected based on their percentage of the population, the report said. CNA also identified major deficiencies in police record keeping and training and recommended "sweeping reforms," the Post and Courier newspaper reported. One city council member described CNA's report as "obviously not sugar-coated," and Black residents told the newspaper that it affirmed the discrimination they'd experienced for years.

Anthony Erace, the acting director of Philadelphia's citizen-led Police Advisory Commission, was less impressed with CNA's work in his city. Philadelphia Mayor Jim Kenney hired the nonprofit to perform an "after-action report" of the police response to civil unrest following George Floyd's killing by a white police officer in Minneapolis last May. Philly police used tear gas and, at times, physical force in response to the demonstrations, during which protesters burned police cruisers and looted businesses. "The city burned for a month," Erace said in an interview with Seven Days.

Erace said parts of CNA's debrief were useful, including a comprehensive timeline of events the consultants compiled, but he thought the team relied too heavily on officials' accounts rather than those of "civilians who lived through it."

Other recommendations were too broad, Erace said. He pointed to one section of the 110-page report that described how police ran out of radios, hampering their ability to communicate during the riots. But instead of reporting how many radios were available and how much new ones would cost, CNA's analysis was brief: The department "should issue every officer a police radio," the report says.

"It doesn't tell us what the actual failing was," Erace said. "If it was gonna pay that much money, [Philadelphia] needed a plan."

The city paid CNA $268,000 for the report. Soon after, Philadelphia City Controller Rebecca Rhynhart ordered a separate report that largely blamed Mayor Kenney and the city's police commissioner for the response to the protests. Many saw the move as Rhynhart's attempt to curry political favor ahead of the mayoral election in 2023; she is considered a potential candidate.

To Erace, the situation shows that independent consultants can tailor their reports to their clients' biases. He encouraged Burlington officials to allow CNA unfettered access to data and to guard against political influence.

"It's hard to do," he said. "You might not come out looking nearly as well as you think you will."

Seguino, the police commission member, is hopeful that CNA will produce an objective report that includes input from a wide range of Burlingtonians. The joint committee expects an honest assessment with real recommendations for change; Burlington can't accept anything less, she said.

"We're a divided city," Seguino said. "My hope is that they deliver on what they've promised."