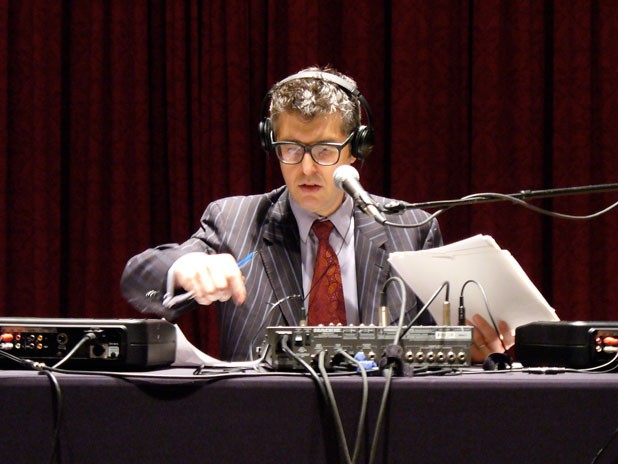 Since 1995, Ira Glass, the boyish-sounding host of public radio’s “This American Life,” has been telling stories. Hundreds of stories about ordinary people that he delivers in his trademark conversational tone, his voice so intimate it feels like he’s in your living room, sitting on your couch.

Over the years, Glass has become a master in the art of radio storytelling. More than 500 public radio stations broadcast the show, including Vermont Public Radio, and the podcast, produced by Chicago Public Radio, is consistently the most popular in the country.

In 2007, Glass’ “This American Life” production team made the jump to television with a Showtime program of the same name. While diehard radio fans balked, the Emmy-winning show introduced Glass and his brand of poignant storytelling to a new audience.

On September 26, Glass brings his years of storytelling experience to the Flynn MainStage, in celebration of the Vermont Folklife Center’s 25th anniversary. This week, Seven Days caught up with the 50-year-old radio star to chat about the popularity of “This American Life” and what makes listeners stay tuned.

Seven Days: At the risk of spoiling your show at the Flynn, I’m wondering how the radio show comes together. Do you come up with the themes and send people out on assignment, or do you organize what comes in from your reporters into these particular themes? Ira Glass: It’s a little of each. This is sort of what my talk is on. Usually what happens is that somebody pitches us some story, or we stumble upon some story that just doesn’t go with the things we’re working on. Right now we have six or seven shows planned and somebody will pitch us something that doesn’t go with any of those, and then we’ll basically concoct a theme to go with it.

Like last week’s show “Frenemies,” we had one anchor story and then went out looking for other stories and those generated a ton of material. And then we just started killing stuff off right and left. We generally kill off between a third and a half of everything we try.

SD: So, you just have stores of stories from casting this net that will fit in other places? IG: Well, hopefully. If it’s good, we’ll invent a way to use it. Yeah, so it isn’t like we have this stuff sitting around. It’s more like we have one thing and then we go and generate tons of stuff, and the theory is that if you do enough things something will come out to be good.

SD: So what makes a story good enough to put on the air? What makes a killer radio story? IG: I mean, there are certain narrative elements. There has to be a character that’s named. There has to be a situation where there are real stakes and things have to happen to them and they have to change. Or, if they don’t change, it has to be for a really interesting reason. In the most basic way, there has to be a plot, the plot has to be surprising, it has to drive towards some kind of new thought about the world or some new insight about how people react in a certain kind of situation. And that insight or thought has to be pretty surprising, too.

Then there’s a quality where some stories are just more charming and engaging than others in the same way that some songs have a melody that sticks in your head. So we’re very mindful of that, too. In the end, it just comes down to the taste of the people who are putting together the thing and what are we like.

SD: Have you ever aired some total clangers, stories that just really missed the mark? IG: Yeah, we totally have. But conversely, there have been a number of pieces that I have adamantly thought were horrible that came out to be the very best things we did. For example, a radio producer in California pitched us a story on kids who were switching genders. “All Things Considered” had just done an incredibly beautiful piece on this same subject, and what were we going to add? So I was 100 percent against it. And our senior producer had a vision for this thing, so we just decided to send the reporter and see what we got. And that turned out to be a really smart move, because it turned out to be one of the best things we put on air all year.

SD: You’re doing a lot of parachuting into people’s lives, but then you’re on to the next story. How do you keep it all straight? IG: My experience is that putting on the show each week is such a totally consuming project. It’s like an army of facts and feelings invades my head with everything I need to know to fight the battle to get this week’s show on the air. For that army to exist in the space of my head means that the previous week’s show has to be vanquished. It can be so intense learning everything there is to know about whoever you’re profiling, there isn’t room in your head for the stories you did the week before. Often by Tuesday of any given week, I can’t remember what the show was we just did.

SD: Yeah, this morning was all Ira Glass for me and when we get off the phone I’m going to forget everything I ever knew about you. IG: I salute you in that.

SD: What do you think makes people listen to “This American Life”? IG: I assume that the kinds of stories that we’re doing appeal to other people for the same reasons they appeal to us. When you do this kind of reporting, you really get into interesting questions about people who are just fascinating in a visceral way. You run into people who are just easy to relate to. And those things in the end are the basis for all drama in fiction and so can be the basis of any kind of nonfiction, too.

I feel like we’re harnessing really, really old narrative forms and we’re just really nosey, curious reporters. And I have the confidence that if something appeals to me, and my taste is pretty average, it’ll be interesting to everybody.

SD: How important is the reporter in the story? IG: The reporter’s voice is hugely important for the story. It’s OK for them to have a perspective. They can have reactions to the material. They can be surprised, amused, amazed or even disgusted. That’s just good broadcasting.

SD: It seems like “This American Life” is taking a more newsy tack. Where is that coming from? IG: Honestly, this has been one of the big shifts in the shows over the recent years. It’s been really interesting to take the narrative storytelling that we do where the characters are more three-dimensional and there’s more of a commitment to writing plotlines and to apply that to things in the news. So we’ve applied that to Hurricane Katrina, torture, the war on terror and especially the financial crisis. That’s been one of the big shifts.

We had a meeting where we talked about what we wanted to be making this coming year. And we were all saying more sexy fun, less big, heavy stuff. So that was our resolution, and then the fall came around and we realized, Hey, we have a really interesting set of ideas to do about the economy and health care. We’re about to head into this massive amount of really in-depth analytical kind of news reporting, against our better judgment, just because we feel like we have to do these stories.