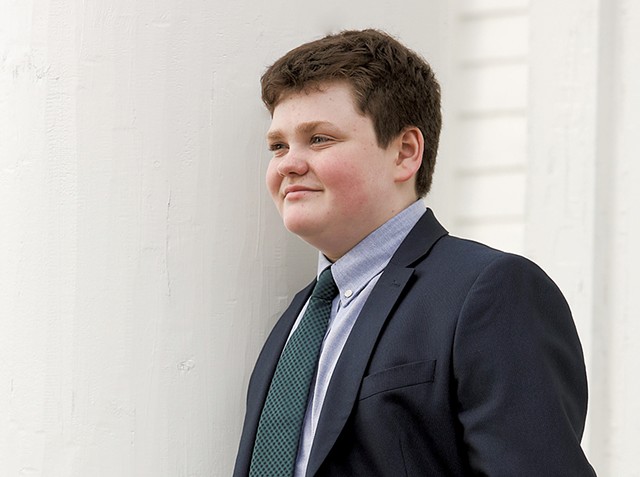 Ethan Sonneborn has never run for elected office before — assuming you don't count his stint on Bristol Elementary School's student council. He's never been employed, other than mowing lawns and walking neighbors' dogs. And he's never even voted — though, in fairness, Sonneborn isn't eligible to do so for another four years.

But none of these hurdles is preventing the Bristol teen from making a bold bid for the state's highest elected office. Last September, the then-13-year-old middle school student announced, via press release, that he was running for governor. He's the youngest candidate ever to do so in the history of Vermont and, likely, the country. In June, Secretary of State Jim Condos confirmed that Sonneborn had garnered enough signatures to appear on the August ballot for the Vermont Democratic Party primary.

"People may tell you that your voice doesn't matter because you're too young," Sonneborn told a crowd of several thousand people from the steps of the Vermont Statehouse during the January 20 March for Our Future youth rally. "But the truth is, democracies are centered around the idea that every individual can make a difference. It doesn't matter what color your skin is, or your gender, or even your age. What matters is your willingness to speak up and share your opinions with others."

On August 14, Sonneborn faces three older challengers in the Democratic primary: James Ehlers, Christine Hallquist and Brenda Siegel. To date, Sonneborn has participated in at least one candidates' forum, which was held in June and sponsored by the group Rights & Democracy.

Regardless of the election's outcome, the 14-year-old, who will be a freshman at Mt. Abraham Union High School this fall, has already left his mark on Vermont politics. Some of the state's most seasoned politicians describe him as an articulate and intelligent young man whose grasp of the issues is advanced for his years.

"I've got to tell you, I really like the kid. He's engaging, he's smart [and] he's curious," said Vermont Attorney General T.J. Donovan, who met Sonneborn at a Vermont Democratic Party fundraiser in May. Donovan said he was impressed by the teen's poise in "working the room" while his mother waited in the wings.

"She was letting him sink or swim on his own, doing what every candidate has to do," Donovan added, "and I just thought it was a great lesson for this young guy in life."

When Kesha Ram, a former member of the Vermont House and a 2016 candidate for lieutenant governor, first met Sonneborn, she admitted to behaving like "another patronizing adult" by asking him about the "learning experience" of running for office.

"He launched right into why the issues matter and what he's focused on and how we need more diversity of voices at the table," recalled Ram, who was herself elected to the state legislature at age 21. "He reminded me a little bit of me at that age!"

Indeed, while most of his peers are attending summer camps and going on family vacations, Sonneborn is spending his time giving interviews to reporters from CNN, the Washington Post, the Boston Globe, People and Newsweek. He's also traveling the state — with his parents as chauffeurs — talking to Vermonters about clean water, rural economic development, sensible gun-control legislation and "making sure that we have an economy that works for everyone by raising the minimum wage."

Kids VT recently interviewed Sonneborn on the Bristol village green where, despite the 90-degree heat, he showed up wearing a sport coat, dress shirt, slacks and tie. Lest anyone suspect that Sonneborn's parents pushed him into this campaign as a stunt, a half hour with the former legislative page — six months ago, he was delivering phone messages to lawmakers he could soon outrank — will quickly disabuse them of that notion.

"Actually, my dad has never voted," he said. (His father, Dan Sonneborn, confirmed by email that he considers himself "politically agnostic" with a "fuzzy voting record.") How does Sonneborn feel about his father's lack of interest in politics?

"People like my dad are part of the reason I'm running," he continued. "For a long time, there's been this stigma around ... politicians, that they're all lying cheaters. I want to reach out to people like my dad who say, 'What's the difference? Why should I vote? What does it matter?' Because our process is overrun with big money and politicians [who] support their donors and lobbyists over constituents."

Sonneborn's interest in politics was kindled when he was just 5 years old and came across an old American history anthology at a yard sale in Bristol.

"In that book, I was fascinated by the people who could build coalitions, who were able to bring people together to accomplish a common goal," he recalled. "The person who personifies that for me is [former U.S. attorney general] Robert Kennedy." 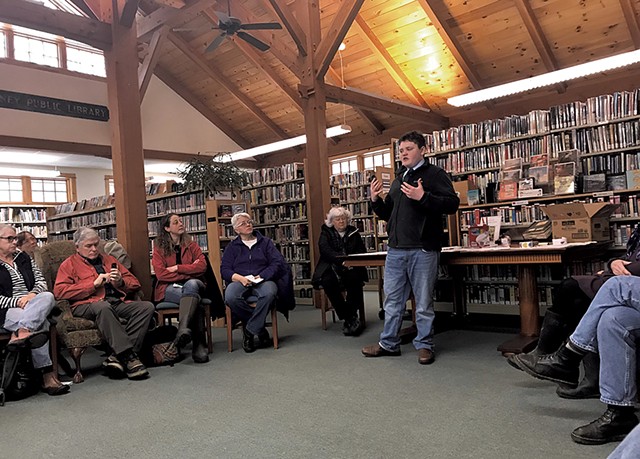 Sonneborn's gubernatorial bid began as a homework assignment. In the spring of 2017, while doing research for a seventh-grade class project on the rights and responsibilities of citizens, he discovered that Vermont is one of only two states, along with Kansas, that has no constitutional or statutorily mandated minimum age for its governor. So, after "weighing the pros and cons," Sonneborn informed his family that he intended to run.

Naturally, his parents were skeptical — not that their son would choose to be a candidate but that he'd be allowed on the ballot. (Dan Sonneborn, an information technology consultant, and Ethan's mom, Jenna Sonneborn, who works for a local nonprofit, declined interview requests, citing their desire to protect their privacy and that of Ethan's younger sister, Julia.)

"Once I convinced them that I was eligible, it was pretty smooth sailing," he said with a smile.

During the school year, Sonneborn enlisted the help of family and friends to launch his candidacy. At times, they joined him at a table on Burlington's Church Street, where he introduced himself to potential voters. Since school let out in June, he estimated that he's spending six to seven hours per day doing "retail politics" — talking to voters at farmers markets, libraries and other public places.

Though he hasn't raised much money, Sonneborn directs voters to his website where they can make donations.

When Sonneborn discusses his positions on issues, one can hear the influences of his political role models, who include U.S. Sen. Bernie Sanders (I-Vt.), former Vermont governor Howard Dean and former president Barack Obama.

"From day one, I would work with legislative leaders to include a public option in Vermont Health Connect," Sonneborn said, referring to the state's federally mandated health exchange. "And I want to tackle the opioid epidemic with harm reduction, by prioritizing rehab over imprisonment and treating addiction like the disease it is, instead of a crime."

Sonneborn's policy statements aren't memorized sound bites that he just regurgitates on command. When asked a question, he pauses first to contemplate his answer but seems comfortable speaking off the cuff. For example, on the day he spoke to Kids VT, the nurses at the University of Vermont Medical Center had just gone on strike. Not only was Sonneborn aware of the labor dispute, he could speak intelligently about the nurses' demands, and he expressed his "solidarity" with them.

How has the Bristol teen taken to his newfound fame?

"A year ago, if you had told me that I would be someone who could influence the statewide narrative, I would have told you you're crazy," he said. "I'm used to it now, but ... it still feels surreal sometimes when I send out a press release and it actually gets covered."

To help with that, Sonneborn has sought the advice of another young candidate running for office: Jack Bergeson, a 17-year-old fellow Democrat and one of six teens running for governor of Kansas this year.

"We have a solid working relationship now," Sonneborn said of Bergeson. "We talk frequently about our campaigns." Sonneborn said that the Wichita teen plans to visit Vermont in August and, possibly, campaign with him.

Even if Sonneborn wins the primary, he would still have to defeat one of the nation's most popular governors, Republican incumbent Phil Scott, in the November general election. If he doesn't win, Sonneborn said, he'll definitely run for office again, though his next campaign will likely be for high school student council. That, he admitted, "would be humbling" after this year's high-profile race.

As Attorney General Donovan put it, "My prediction [is,] this is not the last political campaign for young Ethan."

If Sonneborn were to be elected governor, he would face yet another significant hurdle before taking office: State and federal child labor laws make it illegal for a 14-year-old to work more than three hours a day during the school year.

"Yeah, that's definitely something to consider," Sonneborn mused. "I would have to look more into that ... It's a bridge we'll cross when we get there."

The original print version of this article was headlined "Rising Freshman"