All About Location? The Changing Culinary Fortunes of Burlington’s 156 St. Paul Street 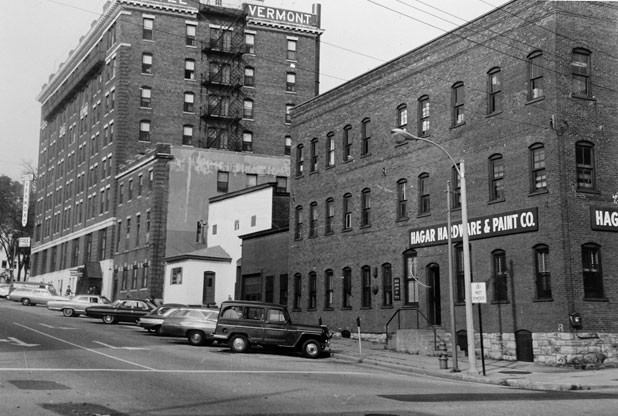 The turn-of-the-century bricklayers who erected Burlington’s 156 St. Paul Street probably didn’t foresee the draw of pan-seared halibut or Neapolitan pizza. Yet, since it went up in 1899, the two-story brick structure that now houses Pizzeria Verità has had more than the proverbial nine lives. After its days as a livery barn, most of its incarnations have been restaurants, watering holes or both.

Locals of a certain age probably recall the string of bars and music venues housed at 156 St. Paul from the 1970s through the ’90s, such as the Drenched Cat and the Blarney Stone. Others remember waiting for a table after its 2001 resurrection as the Waiting Room, one of Burlington’s earliest upscale eateries.

Yet, while Trattoria Delia has flourished next door since 1993, not much seemed to stick at 156 St. Paul Street after the Waiting Room closed. Opus Grill, Plan B, Meñores Mexican Cantina and 156 Bistro came and went. Watching a string of restaurants open and close in quick succession at a single location, it’s hard not to ascribe mystical qualities to the space — faulty karma that only the right tenant can overcome. But could more mundane factors be at play? And, if so, has the latest occupant, Pizzeria Verità, mastered them?

Steve Donahue, who has owned the building since 2001, thinks so. “People have been concerned about the stigma that was being attached to the location,” Donahue says. “Yet, in this [restaurant] industry, there are so many people that have concepts and don’t know how to execute them well. People just fall down; you get a lot of folks who think it’s simple, think it’s easy, and that once they open their doors, people will come.”

Donahue believes Pizzeria Verità may have finally ended that string of bad luck. “It’s a pretty fickle industry,” he says. “The Verità folks really had a concept that was well thought out.”

Peter Yee of Yellow Sign Commercial, a real estate agent who counts restaurant leases among his specialties, also believes that location is not always the primary culprit in an eatery’s demise. “Rather than spaces being difficult, I think what’s flawed is the perception that the restaurant business is glamorous or highly profitable,” he says.

Yee regularly fields queries from aspiring restaurateurs who seem to have only a faint inkling of what it takes to succeed. “It just seems like it is everyone’s dream to open or own a restaurant someday, and it’s so easy to make money. However, it’s rather difficult,” he says. “Most people are undercapitalized and don’t have the work ethic to do it. And, unless you’re really lucky, you should plan on not making any money the first year or two.”

When it comes to the difficulty of making a restaurant stick, 156 St. Paul Street — just off Burlington’s main drag — is a fascinating case study. No. 156 was erected when the corner of Main and St. Paul was still dominated by the American Hotel. In 1906, a huge fire ripped through the hotel; five years later, in 1911, the opulent Hotel Vermont took its place. The building at 156, dwarfed by its eight-story neighbor, was its livery barn. “The carriages used to go into the back and would come out the front and pick up hotel guests at Trattoria Delia. There’s a ramp buried under the floor out front,” Donahue says.

For a few decades, the building housed an auto-upholstery maker. In the 1970s, No. 156 became home to a string of watering holes. Around 1974, it was the Blue Tooth, “which had 10-cent drafts,” notes Winooski realtor Jack Kell. That bar was followed by the Silver Keg and, in the late ’80s, by the Drenched Cat, where future members of the band Phish played backup to jazz musicians during weekly gigs as the Johnny B. Fishman Jazz Ensemble.

A few years later came the Irish-flavored Blarney Stone. A snapshot from the 1990s shows a forlorn-looking building with weathered white aluminum siding and a shamrock on the front. “I was there when I was 18 with no ID,” admits one son of Burlington, who prefers to remain anonymous. He wasn’t alone; other locals, now in their thirties, admit to doing their earliest underage drinking at the now-defunct pub.

The bands, smoke and carousing apparently took their toll on the building’s condition; in 1999, its market value was $309,000, just marginally more than its purchase price 15 years earlier.

In 2001, Steve Donahue bought the place for $285,000 and began renting it out for $13.80 per square foot. When she founded the Waiting Room in 2001, owner Anna Rosenblum undertook an enormous renovation, and another era in the life of No. 156 began — as a fine-dining restaurant.

Chef Matt Birong recalls wandering into the Waiting Room after it opened that year. He was hired as a line cook and went on to become sous chef and head chef. “We were kind of doing a higher-end city thing,” he recalls. The kitchen served up plates such as seared yellowfin tuna with a pink-peppercorn crust and herb-crusted halibut with fava beans. “We were trying to keep it refined but not arrogant,” Birong adds. Also on the line for a time was Aaron Josinsky, now one of the principals of Winooski’s Misery Loves Co.

In a 2002 feature on Burlington, Gary Lee of the Washington Post called the Waiting Room “Burlington’s answer to New Age hipness,” with an “electric scene.” The reporter cooed over the restaurant’s “perfectly spiced duck confit spring rolls.”

Despite its popularity, the Waiting Room closed in 2004. Birong had already moved on, but the news didn’t surprise him, he says now. He sensed the place wasn’t profitable near the end of its run, and he fingers the location as one possible cause. “You have a difficult time getting people off Church Street in the summer,” Birong notes. “You can pull people to City Hall Park, but getting them that one extra block is tough.”

After the Waiting Room, the longest-running tenant was 156 Bistro, a sports bar with contemporary American food that opened in 2009 and lasted two years.

It was Tom Delia, who co-owns Trattoria Delia with his wife, Lori, who tipped off real estate agent John Rao that the space was up for lease again. Rao was looking for a spot to open a Neapolitan-style pizzeria. He and his partners — experienced restaurateurs Leslie Wells and David Abdoo — leased 156 St. Paul in early 2012 and launched yet another renovation. They made space for a two-ton Italian-built pizza oven and broke through the north wall to resurrect bricked-up windows.

“We loved the space but wanted to open it up and make it brighter,” Wells says. “It immediately changed the room.”

Did more illumination give the place the mojo it needed? Anyone who has ventured in since Verità’s opening knows it has been next to impossible to “beg, steal or borrow” a seat during peak times, as Birong puts it.

Wells, who recalls the Waiting Room fondly, thinks the good vibes were always lurking. “It’s always been a great spot,” she says, sounding utterly unsuperstitious. Even though 156 St. Paul is “off the beaten trail,” Wells points out that owners don’t have to pay the higher fees associated with the Church Street Marketplace. She adds that, rather than location, it’s business acumen that matters — and a touch of good fortune.

“No matter who you are and how much you put into it, it’s a little bit of the luck of the draw,” Wells says. She and Rao did a ton of research before opening their business, and spent years perfecting the pizza. Abdoo created an innovative bar program that is a draw, as well. “We’re fortunate every day that it’s working out,” Wells says.

She takes issue with the idea that No. 156 has ever had bad karma. “I don’t understand the negative comments. I always feel like people made it work just fine,” Wells says. “They came in, did what they did, and for whatever reasons their businesses didn’t work.”

Certainly, 156 St. Paul Street is not the only Burlington address that has seen its share of culinary turnover. The busy southwest corner of Pearl Street and Winooski Avenue hosted an array of restaurants before Asiana House achieved long-term success. That business has since expanded to Montpelier.

“If the concept is good, service is good, pricing is good,” says Yee, “the people will come.”

The print version of this article was headlined "Nine (Edible) Lives".