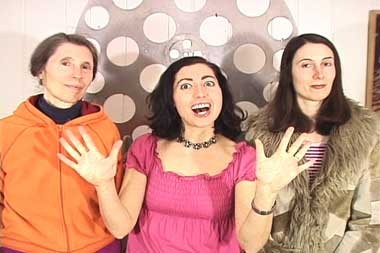 Producing, writing, editing and hosting a local cable television program can be a thankless, all-consuming enterprise. I know because I've done it: My half-hour movie-review show "The Good, The Bad &; The Boffo!" was on the air for nearly 10 years. So I marvel perhaps more than most viewers when I happen across a really well done show on public access, as I did recently.

"The Deadbeat Club," airing twice weekly on Channel 15, is the high-energy handiwork of the multitalented Eva Sollberger, 31. The show features her, her sister and her mother as well as her dog and cat. Sollberger addresses the camera, usually in her back yard, on a variety of topics relating to a monthly theme. Periodically this cuts away to dazzlingly outre video creations that incorporate everything from vintage cinema and cartoons to splashy musical dance numbers and photographs of obscure artists, all set to a bouncy assortment of thematically linked pop tunes.

"The Deadbeat Club" is not only funny, eclectic, brainy and original, but each episode is also a full 60 minutes long. Concerned that she might be

hospitalized for exhaustion at any moment, I hurried to contact Sollberger and find out what makes her tick.

SEVEN DAYS: Eva, "The Deadbeat Club" is a riot. What makes you tick?

EVA SOLLBERGER: The act of creating. It is so easy to fall into a rut or get stuck doing things that don't excite you. Working on an art project wakes me up to all the possibilities of life and the world.

SD: Where'd you get the idea for the program?

ES: When I moved to Vermont a year ago, I decided it was finally time to realize my longstanding dream of having a cable-access show. In California I was too busy hustling and bustling. Vermont seemed like the perfect place to realize my deadbeat dream.

SD: Where does the title come from?

ES: The title was my sister's idea. It comes from a song by The B-52s that was popular in the '80s. It perfectly captures the delicious feeling of being a small-town, laid-back artistic loser going nowhere fast.

SD: What does the term "deadbeat" mean to you?

ES: The show is all about celebrating the weird inner workings of your head. It's about accepting some of your more eccentric, oddball qualities and enjoying them instead of feeling like an outsider or reject. Typically, the word "deadbeat" has a negative connotation, but it is strangely empowering to just accept that side of yourself and move on. Viva la deadbeat!

SD: You cover a lot of ground in the show, everything from high art to lowbrow entertainment. What are your influences?

ES: They are sort of all over the place, which is why I try to feature as many types of art as possible in the show. Films, TV, music, photography, painting and novels have all played a large part in my development as an artist. Growing up in a small Vermont town, movies, TV and novels opened up a whole new, exciting world to me.

SD: One of my favorite parts of your show are the lists you make. David Letterman could take a pointer or two. Your "Top Ten Celebrity Deadbeats" was hilarious. It's not often that Baudelaire, Homer Simpson and Steve Buscemi get mentioned in the same breath. I think the best so far was your list of "Rules for the Tortured Artist"...

ES: I'm probably both a 2 (a very la di da, ho-hum, "look at the pretty flowers" kind of gal) and a full-on 11 (angsty, self-deprecating, dark and obsessed). It is hard being an artist without feeling some torture. I think the two dance hand in hand.

SD: I must say, you do have a refreshingly dark side. I liked it when you dedicated your September episode, "The Love Show," to the late James Dean and then went on to note that he was the one star who never sold out... What's your philosophy of life, anyway?

ES: Life, hmm. I am pretty excited by life. I spend a lot of my time recording it and taking notes in a lame attempt to understand it. The drama and the unknown are part of what makes it so spectacular.

SD: Which do you believe to be the greater blight to humanity -- reality TV or the Bush administration? You talk about both a lot in your show.

ES: Excellent question! We actually enjoy the naughtiness of reality TV. Bush and his cronies are a bit like a reality show, only a little too scary to make good television.

SD: The show makes it clear you're fascinated by the phenomena of Jessica and Ashlee Simpson. Why those two so much more than, say, a prefab celeb such as Paris Hilton?

ES: Glad you asked! Paris is sort of like a paper-doll, vapid and 2D. She appears to be dead inside. Ashlee and Jessica Simpson have a strange appeal that I hate to even examine too long. Perhaps it is the way they've managed to dominate MTV and the entire mass media with their shlocky music? Ashlee's belief that she is a true artist despite all the evidence to the contrary makes her a strangely fascinating character. Jessica's ability to be herself without shame or artifice is something that draws one in against their better wishes.

SD: What's it like to work with your sister and mother?

ES: The three of us haven't lived in the same state for 20 years, so it is a really exciting experience for all of us to be together again. The show is a nice way for us to create something together.

SD: Where do you edit?

ES: On my home computer.

SD: You make very creative and subtle use of pop music in the video segments you direct. Are you worried you'll be sued?

SD: What do you see "The Deadbeat Club" doing for your career?

ES: I see the show as a great learning experience. It is a way for me to practice editing and creating. I doubt it will lead to anything career-wise, but stranger things have happened.

ES: Yes, I think the world should be singing! If life were a musical, we would sing while we were washing dishes, grocery shopping or meeting someone in the street. Imagine the benefits to this crazy world on the brink -- eradicate all the stress, road rage and simple rudeness. The world would be a happier, healthier place full of song! Maybe a dance number or two would be nice as well? A girl can dream.