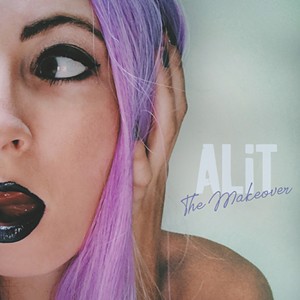 Royalton singer-songwriter Alison "AliT" Turner is used to playing 150 shows a year. When live gigs came to a screeching halt in 2020, Turner turned her attention to songs from her catalog that she thought hadn't been properly introduced to her listeners. Some Turner had mastered for the first time; others she rerecorded completely. She compiled them all on her third LP, The Makeover, released February 19.

Turner is a pop artist through and through, and these songs, written between 2009 and 2016, reveal what she was listening to in that time frame. (Even before I found her "Inspirations" playlist on Spotify, I guessed that she liked Paramore, Michelle Branch and Blink-182.)

That last band comes through in the guitar phrase and pop-punk melody of "Spring (Come What May)," an upbeat tune about anticipating the bittersweet end of college: "The high heels, the glitter, all the selfies, the highs / We say we'll stay close when we go our own ways."

It's easy to imagine the album opener, "Amethyst," as a soaring self-affirmation anthem like Katy Perry's "Wide Awake" or "Firework" with more robust production. Turner's voice even takes on Perry's throaty quality at times.

Turner unveils a darker side of her sound on "Fine Wine," a standout grungy rock number on which she compares her desire to be a performer to an addiction. The song features a hypnotic guitar line and some of the collection's most creative lyrics: "It's hard to wait / Sit like a fine wine / I see friends in ties striking gold / But I'm a mine."

Penned in 2009, "Footprints" is a Chicken Soup for the Soul-flavored reflection on people who pass through our lives and the impressions they leave behind. It's less sophisticated than some of Turner's more recent tracks, but then again, she was 16 years old when she wrote it.

A 2020 post on Turner's Instagram shows her bedazzled pedalboard on the ground next to a lavender cable and capo and a leopard-print guitar strap. The post exemplifies her multifaceted, DIY artistic vision (lavender and leopard print are staples in her visuals).

In addition to performing all of the guitar, bass, synths, keyboards and drum programming on The Makeover, Turner did her own graphics and photography for the album, directs and produces her music videos, and gives a live virtual concert called Ali TV almost every Friday night on Facebook. Her grind and audience engagement seem to strike a chord: She's twice been a finalist for Best Vocalist and Best Pop Artist in the Daysies, Seven Days' readers' choice awards.

The songs on The Makeover have the feel of the demos that big-name artists sometimes release as bonus tracks. Here's hoping the big-budget gods smile on AliT so she can give her buoyant pop songs the full-blooded treatment they deserve.

The Makeover is available at sheisalit.com. AliT performs most Fridays at 7:30 p.m. on Facebook Live.

Speaking of AliT, The Makeover