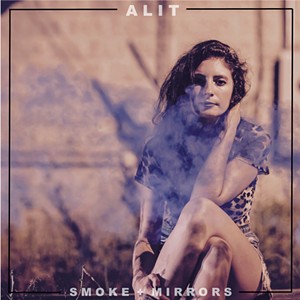 For the last several years, Royalton singer-songwriter Alison Turner, aka Ali T, has been plying her trade around Vermont and the greater New England circuit. She's carved out a niche playing intimate solo shows and made a name for herself with promising songwriting and no small amount of drive. Turner is no weekend warrior; she's about that life.

Smoke & Mirrors, her sophomore LP, continues an upward trend. While there is no denying the talent Turner possesses, her earlier work risked blending in with the scenery. The hooks on her debut album, Break, felt familiar, as did the musical real estate it tried to occupy. The album was good but didn't necessarily possess the vibrancy of newness. In short, her music felt nice and safe.

"Smoking Gun," the first track on the new album, dispels feelings of security right off the bat. As sound bites of newscasters describing an assortment of mass shootings play in the background, Turner's guitar and double-tracked voice wade into one of the most pressing, difficult subjects in current American society. "Young man was pissed that day / Wants the world to hear what he's got to say / Acts like there's hell to pay / Traumatic past explodes like a hand grenade," she sings of the crisis of young white men committing mass murder. The song is no half measure, no cliché statement, but an incredibly well-articulated ballad that brings the listener right into Turner's thoughts.

That level of clarity permeates Smoke & Mirrors. Turner's songs tell deep, immersive stories, often about how obfuscated lives can become in the social media era. "Bitter Bitch" and "Cliché" both touch on the push/pull of trying to succeed in a field that simultaneously demands conformity and originality. The former is a slow burn of a tune, featuring a twitchy snap beat over a synth bass and Turner's subtle guitar work as she laments a culture that turns woman against woman.

Indeed, this is a record that aims to tell the story of women in the modern age. On "Playing House," Turner sings of a housewife named May, "26 and beautiful," who finds herself trapped in a domestic life she once thought she wanted but is now succumbing to urges for more.

"Spin" may be from another's perspective, but in it Turner essentially gives sage advice — which might be considered odd, given that the singer-songwriter is only 26 years old herself. Yet there is both wisdom and empathy in the song, as she namechecks the Beatles and the Smiths before reminding listeners, "You're never alone."

Turner's second offering makes a strong statement and exudes personality and sonic adventure. It's good enough to ease worries of how she will evolve further and makes you wonder what that evolution will be.

Smoke & Mirrors is available on all streaming platforms and can be purchased at sheisalit.com. Turner celebrates the album's release with a full-band show on Wednesday, November 6, at the Higher Ground Showcase Lounge in South Burlington.