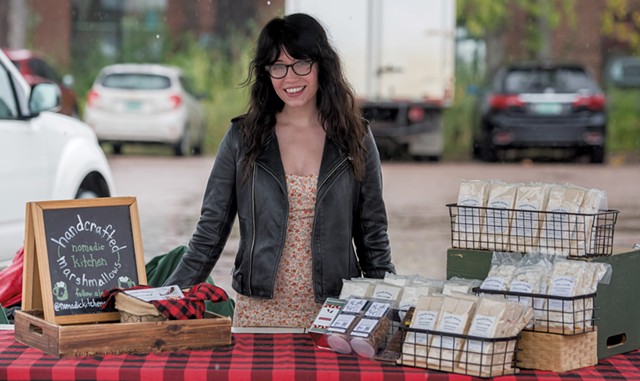 When customers walk up to Alexx Shuman's tent at the Burlington Farmers Market, she greets them by saying, "Welcome to the marshmallows." It's a quick way to let people know what she's selling — not tofu, cheese or soap, as some customers thought in the early days of her business, Nomadic Kitchen.

But Shuman's words are also an invitation into her world, where the small-batch, handmade marshmallows are "pillowy as heck," the bold flavors change with the seasons, and customer perceptions of what a marshmallow can be are transformed after a bite or two.

Witnessing 32-year-old Shuman at work is a little like watching Willy Wonka & the Chocolate Factory — if the kids' classic starred a warm and enthusiastic "Marshmallow Girl" instead of an eccentric recluse.

Clad in a vintage dress or classic Vermont flannel, she casually wields a blowtorch to toast marshmallows to order for S'macarons — s'mores atop French macarons. Her other creations also have whimsical names, such as Yippie Pies and Clusterfloofs. And, instead of guarding secret recipes, like Wonka did, she mentors up-and-coming entrepreneurs.

The moment the weather drops below 70 degrees, sales go up. tweet this

Until Hollywood catches on to Shuman's main-character energy, you can catch the Nomadic Kitchen story on Instagram. That's where she documents the day-to-day successes and stresses of running a small marshmallow confectionery, from philosophizing about how to be a good boss to showing off a nifty new packaging device called a continuous-band sealer.

Her transparency online helps demystify the marshmallow-making process, too: She melts sugar — heating it to a high and very precise temperature — then streams it into gelatin and whips the resulting mixture to add air, before pouring the mixture into pans to set overnight.

She also offers suggestions for how to consume her products: the expected, such as straight out of the bag, toasted in s'mores or melting in hot cocoa; and the unexpected, including dunked and frothy in a cup of morning coffee.

"People believe they know exactly what a marshmallow is," Shuman said. "But I like to say that I'm in the business of surprise."

The business itself was a bit of a surprise. True, Shuman was a self-described "marshmallow kid" who snuck to the kitchen in the middle of the night to roast marshmallows over the stove. And she has some serious culinary chops: She trained at Le Cordon Bleu in Paris, earned a degree from New England Culinary Institute, and worked in James Beard Award-nominated restaurants and bakeries before deciding the grind of the restaurant industry wasn't for her.

After earning an MBA, she spent time traveling and writing a food blog in the south of France, but that didn't feel like the right fit, either. In December 2018, when she was planning to accept a marketing job in Boston, she headed home to Burlington for the holidays and made a fortuitous batch of marshmallows with her mom.

"I'd made marshmallows in culinary school a few times, but suddenly I was making them and I just saw them as something new," Shuman said.

She also saw them as a way to test her entrepreneurial skills and learn a bit about e-commerce. She already had a website, and she set out to sell $150 worth of marshmallows to family and friends. Over the next three days, Shuman accidentally started Nomadic Kitchen.

In the first 24 hours, she developed three recipes: the original vanilla, dulce de leche and coffee-cardamom. On day two, she set up e-commerce on her website. On day three, she spread the word to her college networks.

"I posted everywhere I've ever been: 'Hey, I have this thing. If you want some, order,'" Shuman said with a laugh. "By the end of that week, I had gotten $1,000 in orders, and I was scrambling. I had no systems. I was writing all the labels by hand and was just completely underwater."

But when the orders were filled, she came up for air and realized it was the most fun she'd ever had. She turned down that marketing job, and three months later she was a full-time entrepreneur. 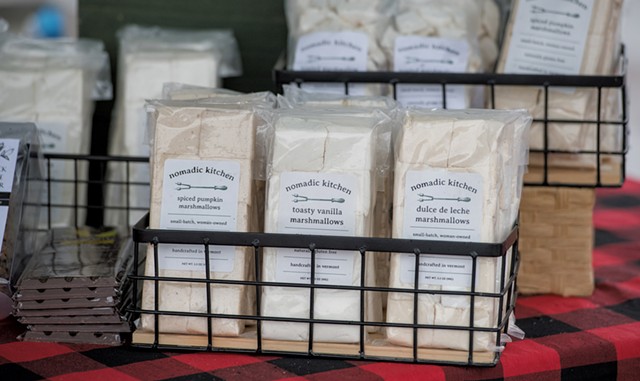 For the first year, Shuman made all her marshmallows in her parents' kitchen. She bought 20 13-by-9-inch straight-sided pans and used three KitchenAid mixers: hers, her mom's and a loaner. She woke up early every morning so she could have the kitchen cleaned by the time her mom made dinner, leaving the marshmallows to set overnight, out of the way.

"The next morning, I would cut them all by hand with a frickin' chef's knife," Shuman said. "I was tossing them in powdered sugar with a spaghetti colander. It was stupid. But it was the most homey thing that you could possibly create."

After a year, she moved the business to an industrial kitchen: Willow's Bagels in Burlington, where she works in the afternoons, making batches five times as large as the ones she made at home. And she slowly built a team: Catie Owen, Kim Cooper and Mandy Jamieson.

Nomadic Kitchen is wrapping up its third year at the Burlington Farmers Market. It added the Isham Family Farm Farmers Market in Williston and farmers markets in Jericho and Richmond this year, and it has expanded wholesale to nearly 30 local stores, including Healthy Living Market & Café.

Despite the growth, Nomadic Kitchen marshmallows remain distinctly homemade. Shuman cuts them by hand, and when she was teaching Jamieson to make them, she insisted the sugar not be measured in grams, as would be standard in a commercial recipe.

"I was like, 'I can't really tell you why, and I know it's going to be annoying, but I want you to measure the sugar in cups,'" Shuman recalled. "Mandy immediately said, 'It's because you want to keep them homemade. They're not supposed to be completely uniform, robot things.'"

Nomadic Kitchen offers s'mores kits and treats such as the S'macarons, but anything that's not simply a marshmallow is a "scrupulously curated" collaboration. The s'mores kits include NU Chocolat's Maracaibo "dark" milk chocolate and Black Rose Briar's gluten-free Graham Wafels; the macarons are from Matryoshka's Bakery.

"It makes things a lot less lonely," Shuman said of those local collaborations. "And it lets me use my business to support my community."

Sticking to marshmallows gives Shuman's boundless creativity some structure. "I was trying to figure out how to build something that I could stay in love with for a really long time — what happens if I funnel all of my creativity and all of my dessert knowledge into one thing?" Shuman said. "Like, how can I make the marshmallow the most interesting thing in the world?"

Her flavors include blueberry-lemon-thyme, brown sugar-blackberry-ginger and smoked hickory-caramel. Adding other ingredients — inspired by what's growing in Vermont, what's happening on the calendar, her own memories and customer requests — presents a challenge to maintaining fluffiness.

"Every marshmallow wants to be a vanilla marshmallow," Shuman said. "Screwing with it like I do, they rebel against me sometimes."

Besides the classic toasty vanilla, Nomadic Kitchen's best seller is the dulce de leche, which Shuman calls the "gateway marshmallow." The golden caramel swirled throughout is based on the dulce de leche that her dad learned to make in Argentina. 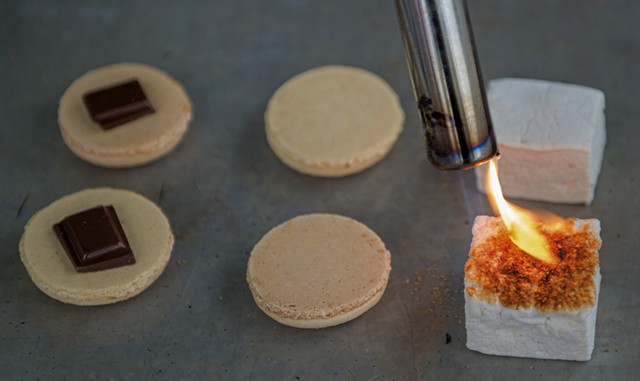 Coffee-cardamom, another of the original recipes and the "cult favorite," harks back to Shuman's time working at Ming Tsai's now-closed Blue Ginger near Boston. She'd put a scoop of the restaurant's cardamom ice cream in her coffee at the beginning of a shift.

The two fall flavors are spiced pumpkin (made with pumpkin puree) and the toasted marshmallow marshmallow, which she calls "marshmallow Inception."

"All of the marshmallows toast up like crème brûlée: The outside gets shattery; the inside gets custardy," Shuman said. "But this one is pre-campfired."

Nomadic Kitchen earns half its yearly revenue in the last eight weeks of the year, as customers start thinking about holiday gifts, cups of cocoa and seasonal treats. Shuman used to call it "the busy season," but sales have been so strong all year long that this year she's calling it "the crazy season."

On the first fall Saturday of the Burlington Farmers Market, the shift into marshmallow season was palpable. Shuman welcomed a steady line of customers with her go-to greeting. Some were clearly regulars seeking the new fall flavors, while others asked, "What even is a marshmallow?"

Most picked up a bag ($9) or two ($16). More than once, someone came back after a family member purchased marshmallows and declined to share. A few asked about vegan or vegetarian marshmallows, which Shuman doesn't currently offer. She has a good vegan recipe but not a great one, she said; perfecting it is a major goal for 2022.

Her other goals are TBD: She's already surpassed the ones that seemed absurd when she started the business three years ago. With the help of an enthusiastic team, she's planning to increase her wholesale business — at least once the crazy season's over.

"The line between Alexx Shuman and Nomadic Kitchen is really, really fine," she said. "In so many ways, I am the brand. How do you scale yourself? But I know we're not done growing. I want to be a really big small business."

The original print version of this article was headlined "Marshmallow World"